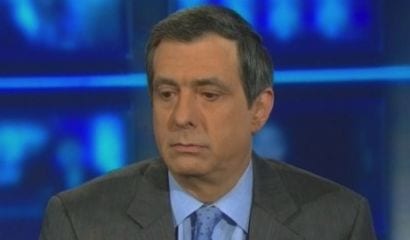 Howard Kurtz had to arrange his own interrogation the other day on CNN’s Reliable Sources, inviting two very somber media reporters to appear and question him about the high offense of having blogged out of tune on the Jason Collins story. A few other lesser offenses — such as the time he confused Congressman Darrell Issa for his spokesman — were also probed, but clearly it was his mishandling of a gay icon that had precipitated this august proceeding.

By the end of the segment, Kurtz looked a bit disoriented, having agreed to a string of “reckless” errors and damaged credibility. But he duly thanked his interrogators for a “fair” inquiry.

The segment was ideological policing masquerading as media criticism. Kurtz’s supposedly catastrophic misreporting on the Jason Collins story consisted of saying in a blog post that he had failed to disclose that he was once engaged when in fact Collins had written as much in his coming-out story in Sports Illustrated. As one of the questioners put it with comic gravity, Kurtz had failed to “fully and adequately” read the story.

This oversight was treated by one and all during the segment as a monstrous error, to be spoken of and scrutinized tremulously, for it smacked of moral and attitudinal defects in Kurtz: “Why didn’t you have the decency to apologize” to Collins after this oversight? And why, said the other questioner, “did you feel the need to mock him” for his past bisexuality? Submitting to the star chamber proceedings in a spirit of glumness and docility, Kurtz readily acknowledged his “lack of sensitivity,” his “inappropriate” tone, his failure to apologize profusely enough after the initial error, his failure to try and contact Collins before the blog post, and his general lack of reverence towards such a sacred subject as a person’s sexual proclivities. “I shouldn’t have taken it lightly,” Kurtz said. “I am determined to learn from this episode.”

Lost in all the self-flagellation was that Kurtz introduced a new inaccuracy into his coverage: by way of apologizing for his thought crimes of misplaced tone and emphasis on such an important story, he noted proudly that he had criticized ESPN’s Chris Broussard. “In fact, when an ESPN reporter criticized [Collins], saying that he shouldn’t be considered a Christian and that he was living a homosexual lifestyle. I found that offensive and I publicly criticized it,” said Kurtz. That mischaracterized Broussard’s remarks: he made general comments about sin; he hadn’t “criticized” Collins. The media, of course, twisted that into a personal attack on Collins. But why is Kurtz repeating that? So much for his newfound scrupulosity and fairness to subjects.

One imagines that editorial meetings in the Soviet Union proceeded like Kurtz’s self-directed interrogation. On issues near and dear to the hearts of liberals, reporters are expected to police themselves unsparingly, no matter how pathetic and un-skeptical this makes them appear. But they can be as sloppy and devious as they want on pretty much anything else. It is comic to hear Kurtz blame himself for not reaching out to Collins before commenting on him in what amounted to an opinionated blog post. Is that a courtesy Kurtz plans on extending to all subjects of his future punditry or just revered liberal ones?

Not a week passes without one of these pitiful episodes in ideological correction. The Left has now moved from Kurtz to historian Niall Ferguson, who is in bad odor for having said at a conference recently that the homosexuality of John Maynard Keynes contributed to his future-less economic outlook. Plenty of other academics and writers have made similar remarks about Keynes over the years. But Ferguson made his comment at the wrong moment in history and now is in full-blown penitential mode. “My colleagues, students, and friends — straight and gay — have every right to be disappointed in me, as I am in myself,” Ferguson wrote on his blog. “To them, and to everyone who heard my remarks at the conference or has read them since, I deeply and unreservedly apologize.”

In a culture of hyperactive political correctness, journalists and academics can never be too careful about what they say about the living and the dead.