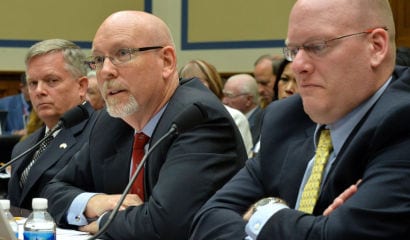 Three State Department whistleblowers’ congressional testimony was nearly forgotten yesterday amid the lies and half-truths coming out of the White House and its congressional cohorts.

If White House press secretary Jay Carney were spinning any faster, he’d be mistaken for an Iranian uranium-enrichment centrifuge.

The testimony proved a host of things, some redundantly.

The first is that when UN Ambassador Susan Rice went on five Sunday talk shows — five days after the incident — the Obama administration had to know she was lying when she blamed the Benghazi attack on an anti-Muslim video. How do we know? Among other things, there were no demonstrations outside the Benghazi consulate before there was a well-planned and probably rehearsed terrorist attack that took the lives of Amb. Chris Stevens and one staffer.

We know from the testimony that the terrorists making the attack were trying to lure more Americans into the fight by making apparently phony calls for help on behalf of the Americans in the consulate.

That’s only one of the reasons that we should conclude that the attack was rehearsed. The other reason is that, as I’ve written before, a Navy ordnance expert I spoke to months ago told me that the mortars used to kill the two former Navy SEALs at an outpost near the consulate had been “registered” to their targets. (That is, the distance between the mortars and their target as well as their relative elevation had been measured.)

Against this evidence, Jay Carney could only mumble something to the effect that, five days after the attack, the Obama administration couldn’t be really exactly, precisely sure just who was responsible for the attack.

The difference, Hillary, is that nobody died in the Watergate scandal. No one manipulated CIA talking points on it, either.

We know that the CIA talking points — which were blamed for Rice’s falsehoods for weeks after they were said — were subjected to massive State Department revisions made for one purpose and one purpose only: to help Obama’s presidential campaign. Any motive other than politics is not credible.

We can easily gather that from the fact that Rep. John Tierney (D-Mass.) said, “People who have actually seen the documents, who have actually conducted a real investigation, completely reject the allegation that [the State Department’s revisions to the CIA talking points] were made for political purposes.”

And how is that a reasonable deduction? Elementary, Watson. The people who supposedly conducted the “real investigation” of which Tierney speaks are all Obama administration flunkies.

There’s more, of course, and lots of it. For example, Carney told the White House press briefing yesterday that, “What I can tell you is that it was the assessment of our intelligence community that the attacks were participated in by extremists.” True enough. The falsity comes in the fact that the CIA’s assessment was changed to delete everything about the jihadis participation in the attack, up to including the deletion of the word “attack” for which “demonstration” was substituted.

Carney added, “That’s what I’ve said. That’s what Ambassador Rice said. She said on that Sunday that extremists were involved. What we didn’t know is what their exact affiliation was.”

This is another example of why we need to watch these guys carefully and not let them tell us what the meaning of the word “is” really is. What Rice said was quite different. For example, to Jake Tapper on ABC’s This Week, Rice said:

But our current best assessment, based on the information that we have at present, is that, in fact, what this began as, it was a spontaneous — not a premeditated — response to what had transpired in Cairo. In Cairo, as you know, a few hours earlier, there was a violent protest that was undertaken in reaction to this very offensive video that was disseminated.

We believe that folks in Benghazi, a small number of people came to the embassy to — or to the consulate, rather, to replicate the sort of challenge that was posed in Cairo. And then as that unfolded, it seems to have been hijacked, let us say, by some individual clusters of extremists who came with heavier weapons, weapons that as you know in — in the wake of the revolution in Libya are — are quite common and accessible. And it then evolved from there.

So, contrary to what Carney said she said, Rice comfortably lied and blamed the anti-Muslim video. Only after they supposedly demonstrated — which we now know they didn’t — did Rice admit that some “extremists” supposedly “hijacked” the demonstration.

Rep. Elijah Cummings (D-MD), the committee’s ranking Dem, got the award for the worst parsing of words at yesterday’s hearings. Cummings — according to (of course) the New York Times — noted “…that the nation’s top military and intelligence commanders have all said that American forces could not have reached Benghazi in time to save any of the four lives lost…”

And of course they concluded no such thing.

As I pointed out in Monday’s column, former Joint Chiefs Chairman Adm. Mike Mullen did his best to cover up for Hillary and Obama in his Accountability Review Board Report. What Mullen said in the briefing that delivered that report is illuminating:

On the night of the attacks, Benghazi, Tripoli, and Washington communicated and coordinated effectively with each other. They looped in the military right away, and the interagency response was timely and appropriate. But there simply was not enough time for U.S. military forces to have made a difference. Having said that, it is not reasonable, nor feasible, to tether U.S. forces at the ready to respond to protect every high-risk post in the world.

Obviously, he didn’t say what Cummings attributed to him: there’s nothing in what Mullen said — or in anything else for that matter — to indicate that all our top military commanders and intelligence agency chiefs agreed that nothing could have been done to save any of the four American lives.

Don’t forget, this attack went on for over seven hours.

What Mullen said indicates that there’s a very high likelihood that Amb. Stevens was killed in the first stages of the attack. As with Clinton (either one of them, for that matter), what Mullen didn’t say is more important than what he did say.

He didn’t say that the two former SEALs couldn’t have been saved in the course of a seven-hour battle. They probably could have if the military forces at Sigonella, Italy had been deployed. One more time: it’s only about 40 minutes flying time at Mach 0.8 for the F-15s that were at Sigonella. They could have gotten there in plenty of time, and those two former SEALs might still be alive.

And so could have the four-man Spec Ops team that one of the Wednesday whistleblowers said were told to not fly from Tripoli to Benghazi, which would have taken about two hours.

The Democrats can spin it as much as they’d like, and they will. The media will do their best to ignore Benghazi. The fact that Fox News has covered it well is enough to convince them that the story is too harmful to Obama.

But this is too big. This is the kind of scandal that could damage Obama’s presidency in the historical sense. Let’s say it again: nobody died in Watergate.