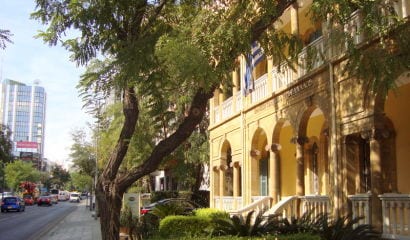 Cyprus caused more interest in its financial state in late March than it had since the rumor spread in the mid-nineties that a group of favored Russian oligarchs were wanting to turn the Greek sector of that ancient Mediterranean isle into some form of financial entrepôt. At the time no one seemed to know how this scheme would work out, but it caused quite a stir and some big plays in the Cypriot bourse. The “wise money” was quite unable to foresee what would later happen in the euro market.

This fanciful concept was among the wild schemes marking the emergence of Russian millionaires – soon billionaires – seeking to hide their wealth from the tax authorities and the prosecutors’ offices. It’s been clear since the start the 21st century that one of the favorite money laundering destinations for rich Russians was Cyprus. Legally and illegally obtained money flowed to Nicosia from Moscow, St. Petersburg, and all the other Russian money centers.

Cypriots always have been known as a commercially active people. The strong expatriate Cypriot community in the U.K. and elsewhere in Western Europe and even the U.S. has become an active force in real estate investment along with its traditional interest in cash-based restaurant businesses. This route also became a valuable outlet for Cyprus-laundered Russian millions.

Unfortunately Cyprus as a country benefited little from this money flow. The island’s low corporate taxes and malleable financial regulations attracted the underground Russian money, but comparatively little stayed in Cyprus to contribute to economic development. What occurred instead was that crafty financial dealing pursued other crafty financial deals in a vigorous money game of musical chairs. The two principal banks in Cyprus, deeply involved in Greek operations, were heavily impacted by Greece’s financial breakdown. The collapse of the two countries’ wheeler-dealer banking has marked a turning point throughout the Eurozone as a far worse crisis looms.

The financial contagion has spread rapidly. The Arab News of Jiddah in a typical hard-nosed Middle Eastern commentary on areas of the world other than theirs explained in late April: “Spain and Greece remained concerned with high unemployment and weak growth; Portugal’s constitutional court recently blocked austerity measures threatening its bailout package; Italy has reached a state of political paralysis; and Slovenian banks are expected to require recapitalization.” This is the sort of analysis that sends all those Saudi petro-dollars flying to safe havens.

The arrangements for the Cyprus bailout not only had to be structured so as to lead to a solution — if partial — of the Cypriot problem, but also be compatible with any lifelines thrown to the other drowning Eurozone participants. An injection of 10 billion euros was provided by the “troika” of the European Union, IMF and European Central Bank — made possible by German guarantees. Cyprus itself contributes to the bailout fund by cuts in salary for 60,000 civil servants (one quarter of the national workforce), and new taxes on property. Imposition of a levy on uninsured bank deposits over 100,000 euros will provide 11.4 billion euros. The package in total is supposed to make the new debt sustainable.

To make matters more complicated, anti-German reaction in Cyprus — and Greece — reached a crescendo. The Germans were characterized as owing Cyprus most of the “troika” money through unpaid interest supposedly owed on unpaid reparations and stolen accounts stemming from the World War II German occupation of Greece. The Russian-related overseas account holders were quick to jump on that political bandwagon. Germany of course denied owing anything and stated all post-war debt had been paid — which it has.

This has been followed by comments in the European press that suggest a major portion of the trouble now existing in the EU’s “southern” tier is due to the purported rigid mindset of the Germans both personally and financially. The same Germany that has been available to pick up the economic ball in the European financial game, and act as the team’s go-to player, is now blamed for the sloppy efforts of the financially loose. Of course the German public does not enjoy having this opprobrium heaped on them and has begun to look back longingly at the days of the old D-mark.

As disruptive as it may be, the next step theoretically would be the division of the current European financial system into euro and non-euro currencies. If this is the route taken, it must be expected that the euro-bound nations will have to float their currencies in a dangerous market without the life preserver of German economic and financial support. The euro would have to drop considerably in value and its various participating nations take on a substantially greater debt in eurobond issuance. Except for those generally northern economies closely tied to Germany, the results of a return to the strong D-mark will impact both the European financial system and the rest of the industrialized world.

All of this has been highlighted by a Hollywood-esque scheme of greed and criminality of a relatively small group of vastly rich Russians who found willing partners in the small island nation of Cyprus. The crumbing of the Eurozone’s southern tier would have happened anyhow due to its own mismanagement at a time when that portion of Europe never really recovered from the credit crisis that paralleled Wall Street’s debacle of 2008. Blaming Europe’s problems on Germany’s penchant for austerity and debt reduction is convenient but false.