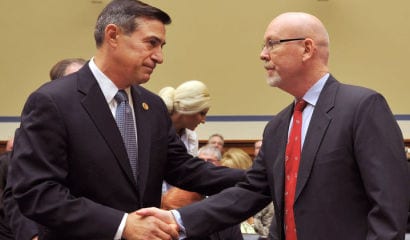 Which one of these facts doesn’t belong among the others?

• U.S. Marines are on alert to evacuate remaining Americans from Libya.
• On the night of September 11, 2012, Gregory Hicks, a State Department official stationed in Tripoli, had a telephone conversation at 8 pm Washington time — that’s 2 am Tripoli time — with Hillary Clinton.
• The Obama administration had a private meeting with their press allies on Friday and CBS’s Sharyl Attkisson is reportedly under fire for taking a skeptical approach to the administration’s spin on Benghazi.
• Rep. Darrell Issa’s (R-CA) hearing last week left far too many questions unanswered.

Okay, you got me: it’s a trick question. None of those things doesn’t belong among the others, and all add up to the conclusion Rep. Frank Wolf (R-VA) reached in January. The House needs to pass Wolf’s H. Res. 36 and create a select committee to investigate the terrorist attack on Benghazi that took four American lives.

Wolf’s point is simply that the conflicting priorities of congressional committees make the Select Committee the only practicable way to get at the truth. As he pointed out in his letter last Friday to Speaker Boehner, Wolf’s bill is now supported by nearly two-thirds of the Republicans in the House, 139 co-sponsors.

Will Boehner have the guts to pass Wolf’s bill? He should, for a host of reasons both substantive and political. In a Friday editorial the Wall Street Journal wrote, “Across this country’s history, the murder of an American ambassador, the nation’s representative, has been taken as not merely a tragedy but an attack on U.S. interests that demands an official accounting to the American people.” With the Journal providing cover for him, Boehner has no excuse to not pass it.

That the Marines are on alert to evacuate the remaining Americans in Libya should be the last stake in the heart of Obama’s “Arab Spring” policy. From Libya to Syria (and Yemen and Iraq and Mali and in so many other places), Obama has worked hard to create a political fiction: that democracy is blooming where it cannot — wherever Islamic law prevails — and al Qaeda is dying among its flowers. Instead, we see terrorist groups fighting among themselves for dominance in too many places. Too many places in which we have lost our ability to influence events.

Which leaves us with the other facts at hand. We know a lot of the questions that still need to be answered, thanks to Wolf’s letter and Andy McCarthy’s usual great work. For example, McCarthy points out here that the Hicks-Clinton telephone call was probably recorded. If that recording (still) exists, it should be turned over to the House and Hillary’s involvement in dealing with the terrorist attack — or not doing so — should be fully investigated.

As should be so many other aspects of this scandal. Another example is the CIA talking points that White House flack Jay Carney claimed were the basis for Amb. Susan Rice’s falsehoods on the September 16, 2012 Sunday talk shows. Carney said, on November 28, 2012, that “Those talking points originated from the intelligence community. They reflect the IC’s best assessments of what they thought had happened. The White House and the State Department have made clear that the single adjustment that was made to those talking points by either of those two institutions were changing the word ‘consulate’ to ‘diplomatic facility’ because ‘consulate’ was inaccurate.”

Which was absolutely false. Moreover, it’s pretty clear that the CIA’s talking points were mangled beyond recognition — at least twelve versions exist according to ABC News — yet the CIA and the intelligence community were blamed for what they and Susan Rice said. The talking points were changed for a reason, and that reason had to be political.

Political as in re-electing Obama. Everything points to the president. His involvement and the involvement of his cabinet and personal staff have to be investigated.

The most interesting part of this is that the White House is feeling sufficient heat on Benghazi to call in the Obamamedia’s most faithful, including CBS News President David Rhodes. (Rhodes’s brother — Ben — is the White House Deputy National Security Advisor for Strategic Communication and reportedly played a major role in changing the CIA talking points.) If, as it appears, the White House is trying to censor Sharyl Attkisson, the alarm bells are ringing all around. Not in the media: they’re Obama’s captives. The desperation alarms are ringing in the White House. They have to bury the Benghazi story before it buries Obama’s presidency.

And they might succeed. Issa’s hearings won’t go on forever and the Benghazi story may only survive in the conservative media. But not if Boehner passes Frank Wolf’s bill and creates the select committee.

What the White House obviously understands is that if Boehner has the courage to do that, there won’t be any way for Obama to escape the Benghazi story between now and the 2014 election. No matter what he does, no matter what he says, as a matter of reflex the media’s attention will return to the select committee’s dealings.

The select committee would, under Wolf’s bill, have the power to subpoena witnesses and documents. So who’s getting subpoenaed this week? Is Obama resisting the document subpoenas? Has he claimed executive privilege yet? What did Hillary’s spokeswoman, Victoria Nuland, say in her deposition? It’s easy to see that creating a select committee could have one overriding effect: the White House should be as tied up with it as Congress was with Obamacare. Our politicians spent about eighteen months on that without a break.

Some of us remember the good old days on Monica Beach. That’s when reporters staked out Ken Starr’s grand jury proceedings in the broad concrete courtyard in front of the U.S. District Court, which became known by that name. There will be enough “process crimes” — lies to congressional investigators that breed lies to grand juries — in any Select Committee’s investigation to keep the Obama administration reeling through 2016.

One of the big reasons that the White House will be tied up is that their friends in the liberal media — especially the crazies on MSNBC and their ilk — are so scared of the Benghazi story that they can’t resist covering it. It may go so far — as one radio talk show host predicted last week — that they would try to cover the Benghazi select committee, even if only to lampoon it, sooner than the rest out of fear of the damage it could cause Obama.

And that’s all politics, the fun side of what we do. The substance of politics is policy, and Obama’s needs to be laid bare to the public.

It would not be beyond the purview of the Benghazi Select Committee to investigate just what Amb. Chris Stevens was doing in Benghazi the night he was killed. What policy purpose was there in exposing him to terrorist attack? Was there some goal that Obama or Hillary was trying to reach?

What was the purpose of the separate mission being conducted by the two former SEALs who were killed the same night? There are so many rumors floating around about what they were doing that a new category of intelligence info had to be created just for it by a friend of mine. He calls it “rumint.” We’ve heard about “MANPADs” — man portable air defense missiles they may have been trying to round up lest they fall into the hands of terrorists. Were they successful? How did their actions further our policy in Libya?

There is every reason for us to be skeptical of Obama’s goals, motivations, and policy. And, given the attention span of the Congress and its committees, there is no prospect that the truth about Benghazi will ever be determined unless Boehner creates the Benghazi Select Committee. The truth still matters. Let’s get this done.