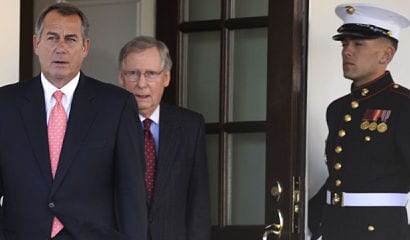 Last week, Speaker of the House John Boehner and Senate Minority Leader Mitch McConnell ostentatiously announced their intention to fight implementation of the Independent Payment Advisory Board (IPAB). They sent a letter to the President decrying the way IPAB will “impact America’s seniors … in the absence of the democratic process.” Sadly, the exercise was a charade. McConnell and Boehner know perfectly well that Obama has no intention of setting up this controversial rationing board until after 2015.

IPAB, as you will recall, was created by the authors of Obamacare to do the dirty work of cutting Medicare costs. It will be, for all intents and purposes, a death panel composed of 15 unelected apparatchiks whose method of “cost control” will be old-fashioned government rationing. It will simply deny payment for expensive medical procedures without which the lives of many seniors will be forfeit. However, as David Hogberg pointed out last month, the President has made no move to implement this integral component of “reform.”

Why not? Well, IPAB comes into play only if Medicare costs increase at a certain rate above the Consumer Price Index. Perhaps Obama had a presentiment that the program’s costs, which have been out of control for decades, would miraculously stop increasing at their usual rate. As it happens, that is precisely what his new CMS actuary has reported. On April 30, acting actuary Paul Spitalnic advised his boss that “the projected 5-year Medicare per capita growth rate” won’t hit the trigger amount that would require the intervention of IPAB.

This memo was sent 9 days before Boehner and McConnell sent their meaningless missive. They have no doubt been planning for some time to make IPAB an issue in the 2014 midterms, and were caught flat-footed when our wily President and his creatures at HHS contrived to put off implementation until after those crucial elections. In other words, these two Republican “leaders” have once again been outmaneuvered by President Obama and are now attempting to obscure that pathetic reality with empty words and impotent posturing.

This substitution of sound and fury for competence and substance has become an all too familiar pattern where establishment Republicans are concerned. And it is by no means limited to flatulent Republican windbags inside the Beltway. It can also be seen in the states, where various Republican governors vociferously denounced Obamacare’s unconstitutional Medicaid mandate only to reverse their positions overnight and fall all over themselves in a mad rush to deliver their constituents into the clutches of Beltway bureaucrats.

I’m all for the Eleventh Commandment, but these old hacks must be put out to pasture. The GOP needs new blood. From whence will the new talent flow? Perhaps from the state legislatures. Many have now forgotten, but the 2010 GOP landslide transformed the nation’s government at the state level. And, despite some 2012 Democrat gains, Republicans still dominate state-level politics. There’s still a vast pool of ambitious young Republicans out here in flyover country. And, unlike their tired elders, they are not interested in going along to get along.

The Medicaid fight highlights the difference between the two generations. In Ohio, for example, old Washington hand John Kasich is now Governor. Kasich spent two years denouncing Obamacare, including its coercive Medicaid provision. Yet, even after the Supreme Court ruled that provision unconstitutional, Kasich flip-flopped and included a provision for expanding Medicaid in his most recent budget. The Ohio House of Representatives, however, refused to cooperate with its perfidious governor and rejected the fiscally unsustainable Medicaid scheme.

And this dynamic is not limited to Ohio. Similar battles have been unfolding in six other states between flip-flopping Republican governors and their legislatures. Moreover, Republican-controlled legislatures are also pushing back hard against Democrat governors who would like to collaborate with Washington on the Medicaid issue. In Missouri, for example, Democrat Governor Jay Nixon has been thwarted by his legislature. Likewise, the Democrat chief executives in Arkansas, Kentucky, and Montana have been similarly stymied.

All of which suggests that the real energy of the Republican Party resides at the state level. This is not to say that the GOP is completely moribund inside the Beltway. Rising stars like Senator Ted Cruz and Rand Paul demonstrate that it is possible to cross the Potomac and retain one’s soul. Unfortunately, Cruz and Paul are the exceptions that prove the rule. Most of our Republican representatives and Senators are cut in the mold of Speaker Boehner and Minority Leader McConnell. Their intentions are mostly good, but they just can’t cut it.

Thus, they have been reduced to acting out charades like last week’s stand against an Obamacare provision that no one intends to implement anytime soon. One wonders if Obama laughed aloud when he received the letter from Boehner and McConnell. Indeed, one wonders if his aides considered it important enough to show him. Either way, these swayback GOP hacks should get out of the way and make room for smarter and more energetic Republicans.