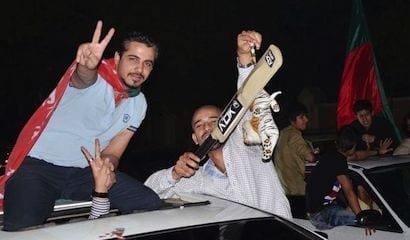 With former Prime Minister Nawaz Sharif of Pakistan victorious in the country’s general election of May 11, the odds of rapprochement between the United States and Pakistan have just increased. An experienced politician and steel industry magnate, Sharif will bring to office the perspective of history, economically conservative credentials, and moderate Pakistani nationalism. During voting proceedings, Sharif has already affirmed that he favors improved ties with the U.S. We can and must do business with this man. It is likely that he will form a coalition government, including among others, the former cricketer and philanthropist, Imran Khan who has much appeal with women and youth. With his business acumen, Sharif and his party, the Pakistan Muslim League, appear best able to address high unemployment and inflation.

Pakistan is an ancient civilization, and a tortured land. As the center of the great Indus Valley Civilization in Punjab and Sindh about 5,000 years ago, its historical antecedents gave rise to Hinduism and its sacred texts as we know them today. Arab migrations after the death of the Prophet Muhammad, followed by Turkish and Afghan sultanates and then the Mughal Empire, which gradually yielded to British influence, have given the country Islam — mainly Sunni. Its inclusion as part of imperial Britain has meant a vision of parliamentary democracy, the English language, and a legal system that is principally western.

Pakistan has much strategic value to the U.S. It borders India, Iran, Afghanistan, and China and is situated near the oil lanes of the Persian Gulf and Indian Ocean, where by one reported estimate, over 80% of all seaborne oil is transported. The recipient of much Chinese assistance, it has 90-110 nuclear weapons, based on the most current assessment appearing in the Bulletin of the Atomic Scientists. With a population of 193 million, it is the second largest Muslim country after Indonesia, and its radical Islamist elements are well-known.

Anti-U.S. opinion and cynicism run deep in Pakistan, a socially elitist society with land ownership that in places resembles feudalism. Recent Pew Research data shows that about three fourths of the people of Pakistan consider the U.S. an enemy. With back to back civilian governments and transition via the ballot box, the country has achieved a first since the time it was partitioned out of British India in 1947.

The basis of improved relations with Pakistan will be twofold. First is the expected withdrawal of the U.S. and NATO counterinsurgency forces from neighboring Afghanistan. It is fundamentally one region with Pakistan having a porous and ineffective border known as the Durand Line, established in 1893 to delineate Afghanistan from British India. Why this withdrawal of forces that peaked at 140,000 could not occur earlier will be debated by military historians in times to come, and Pakistan has for years blamed Taliban aggression on the Western military presence itself. Second should be a restructuring of U.S. foreign aid. Pakistan has received over $23 billion since 9/11 alone for military and civilian purposes. The use of expenditures has been shadowy and weakly accountable, with allegations of monies spent not on counterinsurgency but for capabilities against India. In Pakistan, American foreign aid is seen as perpetuating the elitist and corrupt status quo, keeping the Pakistan Army, also the country’s largest commercial enterprise, and the ISI, the intelligence service, in the pink.

Foreign aid that is directed at projects visible to the Pakistani people, subject to third party or third country audit, would be a better use of financial resources. The power sector is a shambles, with protracted outages in the household and manufacturing sectors. And natural gas is used in home stoves, and for scooters and municipal buses. U.S. aid and investment in those industries would do more to restore the confidence of the people of Pakistan than anything else. The full array of U.S. official debt guarantee, direct loan, and investment support programs should be brought to bear, to the extent that American engineering firms, contractors, investors, and exporters are involved.

Anti-Pakistan sentiment has been understandably high in the U.S., including in Congress — most immediately after the recognition that Pakistan was seen to be harboring Osama bin Laden in a garrison town near Islamabad. However, eventually geopolitical reality will need to supersede those animosities if the U.S. is to bring Pakistan, a Cold War ally for decades, back inside the tent — or perhaps more aptly stated, if Pakistan is to reengage the U.S. on terms that it, too, wants.

In recent years, China has constructed maritime facilities in Sri Lanka, Bangladesh, and Myanmar. It now owns the Pakistani port of Gwadar located on the Arabian Sea in Balochistan, near the strategic Strait of Hormuz. Importing over five millions barrels of oil per day, China’s naval mission is to protect those sea lanes.

Pakistan must reciprocate. It must vigorously renounce terrorism, clean-up the jihadist training camps in Pakistan-occupied Kashmir, transition the Army further toward counterinsurgency, balance its relationship with China and the U.S., demonstrate more transparency regarding the management of its nuclear deterrent, and promote the role of the judiciary and the media. That would be a good start.