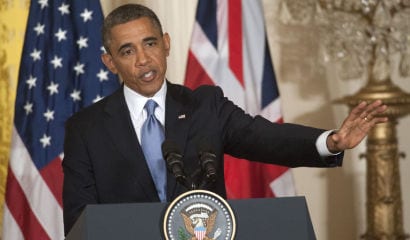 Only when the fingers on it poke people too obviously in the eye, as in the case of this new IRS scandal, does Obama apologize. Otherwise, he likes its extension.

It was the White House’s far left hand that doctored up Susan Rice’s preposterous presentation on Benghazi. Indifferent to the problem of radical Islam, desperate to win an election on the claim that Obama had routed terrorists, and eager to throw a critic of their favorite religion into jail for a YouTube video they deemed hate speech, his aides spun what happened in Libya according to these biases.

Hillary Clinton was stomping around, raging about how that video had hurt the feelings of Muslims and how its creator deserved jail time. For two weeks, Obama treated a national humiliation at the hands of Islamic terrorists as an occasion to muse about the need for greater “civility” in the world.

Obama is still struggling to line up his lies. If he knew, as he now claims, that it was premeditated terrorism from the beginning, why did he spend two weeks on that ludicrous “civility” tour, bouncing from show to show and speech to speech to denounce a video? Gregory Hicks, America’s number two man in Libya, called the YouTube protests a “non-event” there. Yet Obama was happy to leave the impression that Western provocation lay at its root, as that absolved him of responsibility and fit with his far-left ideology of a peaceful Islam that poses no threat to America as long as odious people aren’t antagonizing it.

It is rich that journalists who didn’t mind seeing the creator of the YouTube video thrown into jail (on conveniently “unrelated” charges to his alleged abuse of artistic freedom) now discover their own First Amendment freedom violated. The Obama administration has been snooping on the phone records of reporters. Now that the far left hand of the White House is wiretapping them, it is suddenly okay to talk about tyranny.

This is only shocking to those who haven’t been paying attention. This is perfectly consistent behavior for an administration that deems itself an authority on what constitutes acceptable speech or even what constitutes a news organization. Recall that former White House communications director Anita Dunn, when not sharing with high school students self-help tips from Chairman Mao, decreed that Obama officials boycott Fox News, as it wasn’t a real “news network the way CNN is.”

The far left hand of the White House also pushed propaganda that cast constitutional conservatives as “extremists.” The repeated refrain was that these hopelessly irrational Americans posed a danger to the common good. The Department of Homeland Security even wrote up a report about them. Is it any wonder that IRS officials, operating under this rhetoric, gave heightened scrutiny to conservative groups with Tea Party, patriot, and other terms deemed subversive by this administration in their names?

What annoys Obama about the IRS’s harassment of conservative groups is not that the agents did it but that they got caught. He wants his revolution advanced more subtly. These clumsy disciples interpreted his frequent denunciations of the Tea Party too zealously.

This isn’t the first time that his disciples have listened to his words too attentively. Last summer , for example, they tried to delete any mention of God in the Democratic Party platform, thinking that that comported with his secularism. To mollify public opinion, Obama made a show of rebuking these DNC delegates.

But once the bad publicity passes after a moment of liberal excess the revolution begins anew. The FDA’s recent authorization of over-the-counter abortifacients for 15-year-olds provides a recent example of how that works: when that was first proposed in 2011, Obama opposed it, distancing himself from the FDA; now he is “comfortable” with the FDA’s decision. What changed? Nothing, except the political climate. He has more “flexibility” in his second term. So it might go with the IRS: what he calls “unacceptable” today may pass muster in the future under another Democratic president.

For Obama, who likes to turn the temperature up on the frogs gradually so that they don’t jump out of the pot, whether he approves or apologizes for a moment of liberal excess depends upon public reaction and media feeling. Joe Biden got out “ahead of his skis” on gay marriage, Obama said in 2012, but that was okay because Obama concluded that that wouldn’t hurt him politically and he had the media on his side.

The IRS and wiretapping scandals are a different matter. He knows that the media is upset, so he will have to fake up an appropriate level of anger. On Benghazi, he still has enough of the media to gut that out and is confident that he can continue to snow the public by calling it a “sideshow” and old news.

Obama is the revolutionary who leads from behind, who orders liberals “forward” and then feigns anger when they hear him too clearly and sprint ahead.