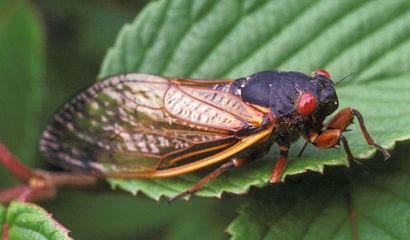 Fifty-one years ago on a bright spring day in a sun-dappled grove, a pair of young lovers rose from slumber, spread their wings and burst into song. For the next month or so, Sam and Cindy spent their days and nights engaging in the ritualistic mating-cycle practiced by their progenitors for centuries. At the end of their courtship, Cindy Cicada gave birth to 500 or so offspring thus giving new meaning to the phrase, “making beautiful music together.”

These two would be the first of the Brood II Baby Boomer cicadas to reproduce. As they prepared to hand over the future to the next generation of red-eyed, American Homopterae, they looked around and saw that all was good. The nation was at peace, JFK was in the White House and the new age of hope and prosperity was expected to last forever. John Glenn went into orbit and Andy Williams sang “Moon River,” which seemed to sum up the era nicely. All in all, quite a nice environment in which to raise a new horde of plant-sucking larvae. And so, as Sam and Cindy departed the scene, their progeny burrowed into the ground to await their date to mate and procreate.

But the world into which they emerged 17 years later was not that of their halcyon nymph-hood. Gone was the air of domestic tranquility, replaced by a national malaise spurred by economic misery and an effete foreign policy. The USSR invaded Afghanistan while Iran’s Ayatollah Khomeini and his band of radical Islamists kidnapped 52 employees of the American Embassy, holding them prisoners for an emasculating 444 days. America was turned upside down, as our flag was burned and mocked while our national morale reached an all-time low.

And the music! Where they had once been rocked to sleep by the smooth sounds of Dion and the Belmonts and Bobby Vinton, the cicada sibs were now shocked awake by humans with women’s hair who sang like men, and women who dressed like men yet sang like banshees. Even their own sweet, summer songs were drowned out by the cacophony that had overtaken the nation. It was enough to drive one buggy and underground for almost two more decades.

Still, out they came, this next generation of Magicicada septendecim, and found that the world indeed had turned once more, but not in the way they’d expected. When they had gone to ground as hatchlings, all hell was breaking loose in the USA and it seemed that any one of a number of catastrophes would serve to break the great nation.

Yet, when they rubbed the dirt out of their blinkless eyes in the spring of 1996 things had indeed changed and the metamorphosis was remarkable. Although Bill Clinton was president, the intervening 17 years had been dominated by Republicans in the White House and in Congress and peace and prosperity had been restored. This pleased the heretofore under-motivated Brooders who happily prepared to propagate at a prodigious pace in hopes that the next rising of their species would benefit from this change. However, just after completing their joyful mating ritual, their reverie was interrupted by cries of “Treason!”, “Corruption!” and “Impeachment!” ringing in their antennae. Exhausted and confused, they burrowed down for their septuadecennial dirt-nap, hoping for the best.

And so it will come to pass in the next few weeks, that 30 billion of the latest descendants of Sam and Cindy Cicada will crawl out of the earth to survey the situation and suck some super-fine tree sap. They will find our nation once again in the grips of a Democrat president who is in over his head and immersed in scandal, with nascent cries for his impeachment beginning to arise. Yes, the coming month will be a tough one for the president, his party and the cicadas, who at least will be able to disappear into the ground for the next seventeen years.

On the other hand, we will not have that long to wait for their much more conservative cousins, the Brood Xers who last appeared in 2004. Their post-WWII history should provide a cautionary tale for the Democratic Party. For each time these little buggers have surfaced, they have landed smack in the middle of a two-term Republican presidency.

May they sing their sweet song from now till then.

(Note: This column is an update of one that appeared in 2004, when a different crop of 17-year cicadas, Brood X, descended upon the East Coast just in time for the re-election of George W. Bush.)