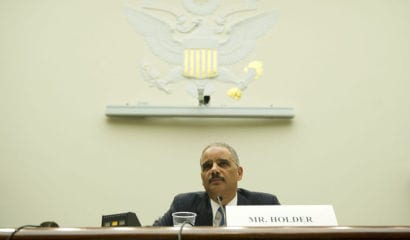 How culpable is Attorney General Eric Holder for his department’s mining of phone calls made by Associated Press journalists? That was the question on everyone’s mind on Capitol Hill yesterday, where members of both parties grilled Holder during a hearing of the House Judiciary Committee.

Answers were not forthcoming. Taken at his word, the nation’s top lawyer has no idea what is going on in his department. (He responded to at least 57 different questions with some version of “I don’t know.”) Specifically, Holder claimed he had little knowledge of the investigation of the leak that led to the data mining because he had recused himself, albeit verbally, to Deputy Attorney General James Cole. Under questioning from Reps. Spencer Bachus (R-AL) and Tom Marino (R-PA), Holder admitted that there was no non-verbal record of the recusal. “﻿Isn’t that sort of an unacceptable procedure?” asked Bachus.

Marino indicated that anytime he has had to recuse himself in the past, he left a “paper trail from here to yesterday” and asked why Holder did not do the same. Holder suggested that there is room for a better federal policy governing recusal, apparently unaware of what’s already on the books. 28 USC Chapter 40 states:

Recusing himself allowed Holder to claim that he knows nothing about the matter. Cole was not present and cannot testify due to the fact that the investigation is ongoing, a point that Holder emphasized repeatedly. Much of Holder’s testimony boiled down to this: “I don’t know. The official who does know isn’t here, and even if he were here he can’t talk about it.”

The DOJ’s U.S. Attorneys’ Manual clearly states that Holder is required to sign off on the subpoenaing of such records, which concerns several members of the committee. Yet Holder could not–or would not–answer questions from Rep. Jim Sensenbrenner (R-WI) about who signed off on the subpoena. Sensenbrenner responded harshly to Holder’s reticence: “Somebody had to authorize the subpoena,” he said because the federal code “is pretty specific [about the fact] that this is supposed to go as close to the top as possible.” Eventually, Holder received a note confirming that Cole approved the subpoena.

Holder also had trouble defending himself on the timing of his recusal. He flaty contradicted himself by saying that he didn’t know when the subpoena was issued and then flatly asserting that he recused himself before it was issued.

Before subpoenaing such records, the DOJ is instructed to seek access through other means, including negotiations with news organizations. The AP has indicated that no such negotiations took place. When Sensenbrenner asked him directly why there the DOJ did pursue negotiations before resorteing to a subpoena, Holder stuck to his motto from earlier in the hearing: “I just don’t know.”

While Democrats left most of the heavy hitting to Republicans—especially Sensenbrenner and Bachus—several acknowledged their concern as well. “It seems to me the damage done to a free press is substantial and will continue until corrective action is taken,” said Rep. Zoe Lofgren (D-CA). “I think this is a very serious matter that concerns all of us, no matter our party affiliation.”

It seems clear enough that Cole is being set up as the fall guy here. But will it work? As Holder himself might say, we really don’t know.