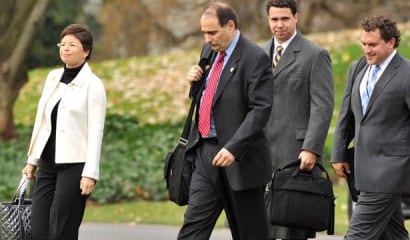 It’s fascinating that David Axelrod suddenly appeared on MSNBC’s Morning Joe yesterday to give his spin on the scandal eruption emanating from the Obama administration right now. On the Department of Justice and Associated Press, Axelrod maintained that he (as a former journalist himself) had some “great, great concerns.” On Benghazi, he dismissed Congressional Republican interest as “a high hard one” thrown at Hillary Clinton to dissuade her from running for president.

Notice, however, that Axelrod came out to give his political spin. What we need to ask Axelrod is not his opinion of these situations as a pundit but his personal knowledge as an Obama White House intimate.

Consider: As scandal upon scandal and cover up upon cover up unfold around the Obama administration, common threads emerge. For one, all of these scandals are partisan, political, and ideological. They all relate to Barack Obama’s political standing and his 2012 reelection. And, of course, they naturally beg the question of what Obama knew and when he knew it.

But in asking these questions, we must, by extension, necessarily look into the two most important figures in Obama’s political life — two partisan ideologues always preoccupied first and foremost with Obama’s political hide: David Axelrod is one of them, and Valerie Jarrett is the other. If there were cover ups, especially related to the 2012 election, it’s difficult to imagine Axelrod and Jarrett not having had some knowledge, or perhaps even some degree of involvement.

No other individual is more responsible for making Barack Obama president than David Axelrod. (See my March 2012 TAS profile, “David Axelrod, Lefty Lumberjack.”) His impact is extraordinary, as deep as the words “hope and change” — slogans coined by no less than Axelrod himself. The Los Angeles Times called Axelrod “the man behind Obama’s message.” In 2008, he was the “keeper” of the message in a message-based campaign in which “message is everything.” The same was true for the 2012 campaign.

The New York Times dubbed Axelrod “Obama’s Narrator,” and said that it is Axelrod “who sits closest to the Oval Office.” Axelrod did so constantly throughout the first term, holding vigil and strategy sessions dictated by poll numbers and the latest news, fastidiously ensuring that no emerging political developments damaged Obama’s precious reelection prospects.

Axelrod became indispensable to Obama. As Politico put it, he was Obama’s “pillar,” and in that first term, there were “no limits on his roles inside the Obama administration.”

Back in 2007, Axelrod had said that getting Obama elected was something he would “really be proud of” for the rest of his life; something that “would really change politics.” He saw Obama as a Lincolnesque figure. In 2012, he aimed to repeat the historic performance. He left his “pillar” at the White House to head back to Chicago to concentrate full-time on moving Obama “Forward!” into a second term. “I have one campaign left,” Axelrod told a reporter, “and it is going to be to try to elect a guy who I think is a great president.” He pulled it off.

In that crusade, no one has been as close a compatriot as the fearless knight who protects the Obama castle: Valerie Jarrett.

Jarrett is the most influential member of Obama’s inner circle. (See my July/August 2011 TAS profile, “Letting Obama Be Obama.”) The New York Times called her the “guardian” of Obama’s “authenticity.” She is Obama’s “old hometown mentor,” “closest friend in the White House,” “all-purpose ambassador,” and “ultimate Obama insider.” As the Washington Post’s Dana Milbank put it, Jarrett holds a “position of unparalleled influence over the president.”

Obama himself calls Jarrett one of his “oldest friends” — “like a sibling to me… I trust her completely.” Jarrett says of her and Obama: “We have kind of a mind meld. And chances are, what he wants to do is what I’d want to do.”

Indeed, they often do the same thing. They are political/ideological soulmates, and intensely partisan Democrats. The most volatile and rude and crude Obama political actions, such as the outrageous and uncompromising HHS mandate, often carry Jarrett’s fingerprints or insistence. In fact, so does almost the entirety of Obama’s hard-left agenda.

For the record, both Valerie Jarrett and David Axelrod have rather astonishing roots to Obama that run deeper still. The three share a fascinating political tree that stretches way back to Chicago’s radical past. Specifically, Obama was mentored by Frank Marshall Davis, a devoted communist who joined Communist Party USA in Chicago in the 1940s. (See my October 2012 TAS profile, “Dreams from Frank Marshall Davis.”) There, Davis worked with the Canter family, old CPUSA hacks who had actually worked for Stalin’s government in Moscow before relocating to Chicago. Remarkably, David Axelrod was mentored by the Canters, specifically by David Canter. As for Valerie Jarrett, she is the granddaughter of Robert R. Taylor and daughter-in-law of Vernon Jarrett. Both Robert Taylor and Vernon Jarrett happened to work in Chicago’s extreme-left circles with Frank Marshall Davis.

I realize these connections seem utterly amazing and hard to imagine, but I assure you that not a word is exaggerated. (I wrote an entire book on the subject.) All of these links are irrefutably affirmed by media archives, Congressional reports, FBI files, Soviet Comintern archives, and on and on. Besides, who could make this up?

Today, the political children of Frank Marshall Davis and the Canters and Robert Taylor and Vernon Jarrett inhabit the White House. In their wildest dreams, the old Chicago comrades could not have imagined Americans in November 2008 and 2012 placing this unlikely troika at 1600 Pennsylvania Avenue.

Nonetheless, Americans did just that — with the powerful help of the same liberal media whose phones the Obama administration reportedly tapped. And now, as a result, we’ve had not only five years of Barack Obama as president but five years of scandals and cover ups swirling around Obama. And no other figures have swirled around Obama like David Axelrod and Valerie Jarrett.

And so, as Congress considers calling more witnesses to testify in the growing list of scandals, from Benghazi to the IRS to the Department of Justice, it cannot avoid asking questions to David Axelrod and Valerie Jarrett. They are the political eyes and ears of the Obama administration. What did they know and when did they know it?

If anyone knows anything — including what Obama knew — it is David Axelrod and Valerie Jarrett. Let’s ask not for spin but facts.