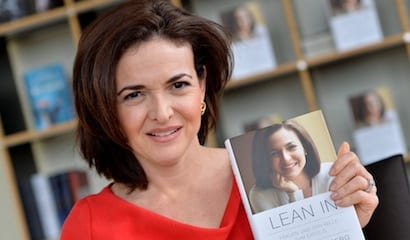 A half-century has now passed since feminism hit the fan in the early Sixties. Sheryl Sandberg, who has been called “the It Girl of Silicon Valley,” wasn’t even born yet, but she has already been a vice-president at Google and she is now Chief Operating Officer of Facebook. She has “made a difference,” as they say, but a liberated woman’s work is never done. Her poor feeble sex is backsliding, exhausted by trying to have it all in the war that won’t go away: career vs. motherhood.

To prop them up and teach them how to make a difference and make a baby at the same time, Sandberg has written a book with the curiously blah title of Lean In. Ostensibly it means the opposite of pull back, a plea to women to hang in there until universal high-quality child care, maternity leave, paternity leave, and personal leave are a reality instead of her favorite mantra. But a title should not function as a delay button to give readers time to figure out what a book is actually about, and this one fails utterly to nail her theme with the you-go-girl catchiness that a feminist manifesto needs. Instead, the book opens with a description of Sandberg literally leaning in a toilet bowl. Pregnant for the first time at 35, she had to sign off on her morning sickness so she could make it to Google’s executive boardroom in time to make a difference.

Like Narcissus when he fell headfirst into the reflecting pond while trying to get a better look at himself, Sandberg leans in too far. Her book is a treatise on self-love, a case study of egotism, a catalogue of conceit whose teaching moments keep turning into bragging moments. To expectant mothers who fear that being pregnant will make them seem less than dedicated to their jobs, she offers her own experience in “overcompensating by overworking,” but somehow her empathy dies a-borning and she starts crowing about the time she put one over on Google.

The company offered a three-month maternity leave and to her co-workers’ surprise she took it. They made bets on how long it would take her to be back to working in her usual hammer-and-tongs fashion and gave her (and themselves) one week of peace and quiet. Sandberg, who likes to flaunt what she calls “every competitive, A-type fiber of my being,” took the bet and immediately started to fudge.

I was back on e-mail from my hospital room the day after giving birth. Over the next three months, I was unable to unplug much at all. I checked e-mail constantly. I organized meetings in my living room, during which I sometimes breastfed and probably freaked several people out.…I went into the office for key meetings, baby in tow.…Being a new mother was exhausting, and when my son slept, I worked instead of rested.…

Maternal guilt kicked in and she decided to hold herself to a 9-to-5 office schedule, but this triggered career-woman guilt. Unwilling to let her colleagues discover that she was taking it easy, she fudged again. To make sure no one saw her leave Google at five o’clock, she lurked in the lobby and cased the parking lot until it was colleague-free, then bolted out to her car and sped off, home to her virtual baby and her real e-mail.

Sandberg may think this worthy of a Fortune 500 profile, but it sounds more like the insufferable kid who constantly asks the teacher, “Can I get extra credit for that?”

Despite her pleas for perfect gender equality, she drops some strange little hints that the female sex, perhaps because of her membership in it, is in some way superior to the male. “I have breast-fed two children and noted, at times with great disappointment, that this was simply not something my husband was equipped to do.” Moreover, her sister-in-law shares this view and Sandberg quotes her verbatim: “It’s really hard to listen to your baby cry while your struggling husband with no breasts tries desperately and sometimes awkwardly to comfort her.” What is this? It’s not comic relief because that is just not Sandberg; she is the type who would buy a book called How to Develop a Sense of Humor in Two Weeks with worksheets in the back. They sound like Amazons, or those prehistoric Celtic goddesses with names like Fellatrix who nursed their babies during pit stops at the chariot races.

“The advent of the modern-day breast pump has changed the equation,” Sandberg notes none too happily. “At Google, I would lock my office door and pump during conference calls.” (And play practical jokes on the callers who asked what the beeping sound was. You do not want this woman’s nerve in your tooth.)

The literary style of the earlier feminists consisted of dropping a word into the water and letting it widen into a sentence, but Sandberg belongs to the PowerPoint generation. The best thing that can be said about this book is that it is short. The actual text runs to only 172 pages; the rest is taken up by an Acknowledgments consisting of 164 annotated thank-yous, and a 45-page clot of Notes in minuscule print giving the sources to back up the author’s incessant claims of “research shows,” “studies reveal,” and “experts agree.”

Author and sources invariably have dogs in the same fight, e.g., “Study after study suggests that the pressure society places on women to stay home and do ‘what’s best for the child’ is based on emotions, not evidence.”

Another study? It finds that “equal partners have happier relationships: When husbands do more housework, wives are less depressed.”

More experts? “have discovered that couples who share domestic responsibilities have more sex…the best way for a man to make a pass at his wife might be to do the dishes.”

How about a great big Thus? This one comes from a tracking survey by the Early Child Care Research Network working under the National Institute of Child Health and Human Development, who studied 1,000 kids for 15 years: “There is, thus, no reason for mothers to feel as though they are harming their children if they decide to work.”

Sandberg is not the feminist she thinks she is. Blaming women for playing into the stereotype of the female as too tactful and cooperative to be a strong boss able to shout down dumb ideas, she nonetheless plays into the same stereotype herself, composing one needless, distracting grace note after another: “This is not to say…I don’t mean to suggest…it is not my intention to reject….” Statements that might strike somebody, somewhere as a tiny bit too curt are solemnly disowned and dragged away on the velvety grappling hooks of conflicted feminism.

Nor is she free of the female fear of being disliked, though you would never know it from some of the bald statements she is prone to make (“Some critics will point out that it is much easier for me to lean in, since my financial resources allow me to afford any help I need”). Unfortunately, her logic leaves something to be desired. Powerful women have traditionally been disliked, she explains, but that will end when powerful women are no longer the exception, since “if women held 50 percent of the top jobs, it would not be possible to dislike that many people.”

ACTUALLY THERE IS one kind of powerful woman that Sandberg clearly dislikes, though she is scrupulously careful not to show it. Her whole gig is about combining career and motherhood, so the unmarried childless woman is a threat by definition, harkening back to the very old days when spinsters were the only females who could even apply for a job. Sandberg met one who let her have it between the eyes: “My coworkers should understand that I need to go to a party tonight—and this is just as legitimate as their kids’ soccer game—because going to a party is the only way I might actually meet someone and start a family so I can have a soccer game to go to one day!”

There it was, out in the open: proof that some of us still believe that she travels fastest who travels alone and that children are seen, heard, nasty, brutish, and short. It’s not hard to imagine what went through Sandberg’s mind, but saying it would serve no useful purpose except common-sense hiring preferences so she replies sweetly: “I often quote this story to make sure single employees know that they, too, have every right to a full life.”

The one thing without which no feminist book would be complete, and which also saves them from being completely unreadable, is the rivetingly idiotic statement that everybody remembers forever. Lean In contains a classic based on the author’s work-outs with Jane Fonda’s aerobics tapes. Watching Fonda smile steadily through hours of sheer torture, Sandberg took to imitating her and found that forced smiling made her feel more confident.

Research backs up this “fake it till you feel it” strategy. One study found that when people assumed a higher-power pose (for example, taking up space by spreading their limbs) for just two minutes, their dominance hormone levels (testosterone) went up and their stress hormone levels (cortisol) went down. As a result, they felt more powerful and in charge and showed a greater tolerance for risk. A simple change in posture led to a significant change in attitude.

Working moms please note: Do not attempt this in public.