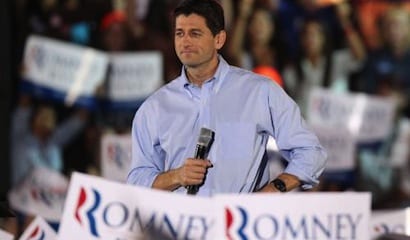 It would be understandable if Paul Ryan didn’t want to stick his neck out just now. As the GOP vice-presidential nominee last year, Ryan spent four months on a whistle-stop tour of the country, shaking hands, answering questions, and speaking at campaign rallies, sometimes in multiple states on the same day. If the 43-year-old Wisconsin Republican lay low for the next year—ate regular meals, sat in a tree stand with an arrow nocked in his bow, savored a (however slight) downtick in denouncements—one could hardly blame him.

After the election, Ryan did spend some time unwinding. During Thanksgiving week, for instance, he took a trip down to Oklahoma, his wife’s native state, with his 10-year-old daughter. “I took her deer hunting, and she got her first buck, a nice 10-pointer. That was really exciting,” Ryan says, beaming. “My first deer was what we call a button buck.” It was a clean kill with a .243 Remington 700—a junior size, made for kids—that she’d received from her parents the previous Christmas.

Today, though, mere months after stepping off the Romney-Ryan 2012 bus for the last time, if the congressman feels any lingering exhaustion from the campaign trail, he doesn’t let it show. In fact, he’s thrust himself right back into the center of the political melee, and—on a host of issues, from immigration to poverty—is stepping up to do what statesman are supposed to: lead.

THE CONGRESSMAN IS BUBBLING with energy when we meet in his Longworth office, a home away from home for Ryan, who sleeps on a cot there when the House is in session. The décor is eclectic: an autographed napkin on which economist Arthur Laffer has drawn his eponymous curve; taxidermied ducks in various poses, sitting on a log or winging their way toward the ceiling; honorary degrees from Hamburger University, a 130,000 square foot McDonald’s training facility in Illinois across the border from his district (Ryan worked the grill at a franchise during high school).

Many Americans had probably heard of Ryan—or the “Ryan budget”—before his nomination last year, but the campaign doubtless further imprinted on the national consciousness his name, blue-eyed visage, and biography. He was born and raised in Janesville, Wisconsin, the town he still calls home; studied economics and political science; interned and then worked on Capitol Hill before winning a seat in Congress in 1998 at the age of 28. Ryan rose to prominence by crafting a series of audacious conservative budget proposals beginning in 2008, and then championing them tirelessly when even fellow Republicans were skeptical. He was elevated to ranking member of the House Budget Committee in 2007, and then chairman after the GOP took control of the chamber in 2010.

When I ask about the contrast between the Republicans’ budget, passed by the House, and the Democrats’, passed by the Senate, Ryan uncrosses his legs, straightens up in his chair, and begins to animate the conversation with his hands. He throws out detailed figures unaided, the way a serious sports fan can rattle off statistics about passing yards and free-throw percentages. For instance:

“The president’s budget achieves a small amount of deficit reduction over the 10-year period simply because his tax increase slightly eclipses his spending increase by about $119 billion,” Ryan says. “That deficit reduction, when you take out all the smoke and the mirrors in the president’s budget, begins to occur in the year 2020, four years after he’s left office.”

The political challenge this year is a bit different in that, for the first time since 2009, Senate Democrats have passed a budget. Republicans ushered their own plan through the House, and so legislators are tasked with closing the gap—nay, chasm—between the two proposals.

Looming over the entire process is the debt ceiling, the statutory limit on the federal government’s ability to borrow, which is slated to run out sometime in late July unless Congress intervenes. Ryan says he thinks the two issues will probably converge, and that if the president wants a large, long-term increase in the debt ceiling, he’d better come to the table prepared to make a deal on the budget.

All of which raises the question: How should Republicans most profitably oppose the president? How hard a bargain, with control of only one half of one third of the federal machinery, can the GOP possibly drive?

Ryan has clearly pondered the question, and he answers in a way that belies his caricature. Liberal writers and activists revel in portraying Ryan as an ideologue. In October, a New Yorker writer described him as a “Randian social engineer.” A profile in the New Republic the same month suggested that  Ryan built his career by feigning bipartisanship, using a few “liberal enablers” and then tossing them aside.

Yet the word that keeps coming up in Ryan’s speeches and interviews is prudence, which he describes as “good judgment in the art of politics.”

“We’re in the minority. We understand that.” Ryan says. “I’ll take a couple of steps forward instead of maybe a mile forward, so long as I’m going in the right direction. That’s what prudence is.”

This seems to be his tack on immigration, too. A bipartisan gang of eight senators, including (perhaps most prominently) Florida’s Marco Rubio, have proposed legislation that would tighten border security, streamline legal immigration, and—eventually—provide a pathway to citizenship for at least some of the immigrants here illegally today. A group in the House is drafting legislation with similar brush strokes. That bill has not yet been released, but Ryan is already stumping for the approach. In late April, he teamed up with Chicago Democratic Congressman Luis Gutierrez to call for an immigration compromise.

Conservative critics of the Senate proposal—and others like it in the past—have compared the bill to the Immigration Reform and Control Act signed by President Ronald Reagan in 1986, which, needless to say, failed to arrest the flow across our borders. Ryan insists that Republicans have learned their lesson. First, he’s convinced that the GOP can add “triggers” to the bill that are specific and enforceable enough that the naturalization provisions will only kick in after enforcement is well underway. Second, he says improved technology, specifically the E-Verify system, will allow employers to check job applicants’ immigration status in a way that was impossible three decades ago. Third, Ryan firmly believes that immigrants provide needed labor and help grow the economy, and that Republicans did not do enough in the ’80s to fix the legal immigration system.

His philosophy is that the border should have high fences, but wide gates, too. “Look, we should be the party of immigrants. Because what’s an immigrant? It’s a person who takes a risk, self-selects to leave their home in search of a better life,” he says. “To me, this country is still that melting pot that my Irish ancestors came to enjoy.”

THIS PHILOSOPHY SEEMS TO underlie much of Ryan’s thought. He is animated by what, in our interview, he called the American Idea—a term he defined during a speech at an American Enterprise Institute dinner in early May: “What is this idea? Well, it’s the belief that the circumstances of your birth shouldn’t determine the outcome of your life—that if you work hard and play by the rules, you can get ahead.”

The language Ryan deploys when speaking about a whole host of issues is firmly rooted here. We must control our debt in order to safeguard the American dream. We ought to extend that dream to hardworking, risk-taking immigrants. We must limit the reach of government, support civil society, and recognize the moral case for capitalism.

For the most part, Ryan seems optimistic about preserving the American Idea. He radiates positive energy and says that the ground has shifted in favor of reforming programs such as Medicare and Social Security. “Look, I’ve been running, I’ve been doing entitlement reform for years. I’ve been offering specifics, I’ve been passing budgets, and, you know, we’re still standing,” he says. “I think we in the House have proven that this is no longer the third rail of politics.” He points out that the Romney-Ryan ticket won the senior vote (and by 12 points too, according to CNN exit polls).

Yet he also sees thunderheads on the horizon, and he describes them in disconcerting terms. To Ryan, a sovereign debt crisis in the United States is not just a hypothetical, but a distinct possibility in the near term. Without serious moves to rein in spending, lenders will eventually lose faith in America’s ability (or will) to repay. Interest rates will soar, necessitating austerity, unemployment will spike, causing social unrest…and we will follow Europe down that well trod path paved with good intentions.

“This is what I try to tell people: We’re not going to have some grand bargain that fixes all the problems. There’s just too big of a difference between ourselves and the president on just philosophy,” he says. “But hopefully we can buy the country time by keeping the bond markets at bay.”