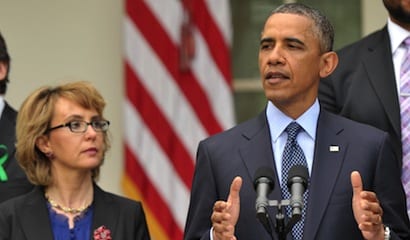 When the Democratic Senate killed every one of President Obama’s gun-control proposals on April 17, the next day’s New York Times featured two revealing stories. The first was a front-page “news analysis” by reporter Jennifer Steinhauer, which carried the headline “Gun Control Effort Had No Real Chance, Despite Pleas.”

I could have told them that months earlier. Even if the Senate had passed a bill, it would have had to get through the Republican-controlled House. But the effort’s futility was apparently news to Steinhauer, who for days had been filing suspenseful reports with headlines like “Centerpiece of Gun Bill Remains in Doubt,” “Threat to Block Debate on Guns Appears to Fade in Senate,” and even, on the day of the vote, “Senate Sets Flurry of Crucial Votes on Gun Measures.” How could they have been crucial if the outcome was predetermined?

Most striking, though, was this passage:

At a moment when the national conversation about how best to stem the menace of guns in the wrong hands seemed to have shifted, it turned out that the political dynamic had not.

Here is the Taranto Principle encapsulated. Like all “national conversations,” this was a lecture, with the rest of us expected to shut up and listen to Obama and his supporters in Congress and the media. The so-called conversation “seemed to have shifted” only because its volume and emotional pitch reached unprecedentedly high levels after the December massacre in Newtown, Connecticut. Obama spoke repeatedly and passionately on the subject; the Times and other newspapers published forceful, though poorly reasoned, editorials; bumptious broadcasters on MSNBC and CNN bellowed and brayed.

And the public came around. Why, there were poll numbers to prove it! “By now it’s well known that 90 percent of the American people support universal background checks,” raged President Obama in the Rose Garden after the Senate voted down a background-check provision.

Of course the poll numbers were cherry-picked, and, as Steinhauer finally figured out, “the political dynamic had not” changed. Liberal politicians and media, led by Obama and the Times, had waged a propaganda campaign aimed at inciting a moral panic. They succeeded only in convincing themselves that they had succeeded.

AND THEY CONTINUED the campaign even after they lost in Congress. On the Times’ April 18 op-ed page appeared a 900-word article under the byline of Gabrielle Giffords, the former Tucson representative who suffered severe brain damage when Jared Loughner shot her two-and-a-half years ago. That shooting prompted a similar propaganda campaign, but for some reason it was about not guns but “incivility” in politics (see “A Week in the Death of the New York Times,” TAS, March 2011).

That Giffords had been at the center of (though not a participant in) the “civility” fury is ironic in light of her anti-gun op-ed. It is a model of incivility and unreason that should be included in every textbook of logic and political rhetoric, so rife is it with examples of demagogic appeals and logical fallacies:

• The argumentum ad passiones, or appeal to emotion. She led with this one: “Senators say they fear the N.R.A. and the gun lobby. But I think that fear must be nothing compared to the fear the first graders in Sandy Hook Elementary School felt as their lives ended in a hail of bullets.”

• The appeal to motives. Giffords claimed that the senators who voted against the measures “made their decision based on political fear and on cold calculations about the money of special interests like the National Rifle Association.” She accused them of “cowardice.” (But wait. Wouldn’t it require bravery for elected politicians to defy the will of the supposedly pro–gun control electorate?)

• Poisoning the well. She reported that some of the senators who voted against the amendments “have met with grieving parents” and that some “have also looked into my eyes…and expressed sympathy.” Her purpose in citing these facts was to impugn the lawmakers’ sincerity: “Still these senators decided to do nothing. Shame on them.” But from their rejection of particular legislative proposals, it does not follow—and indeed it seems unlikely, and is boorish to assert—that their expressions of sympathy were not heartfelt.

• Begging the question. Giffords characterized the proposed amendments as “common-sense legislation” that “could prevent future tragedies” and described them as “benign and practical.” She pretended that the central matter in dispute had already been settled in her side’s favor.

• The no-true-Scotsman move. “These senators have heard from their constituents—who polls show overwhelmingly favored expanding background checks,” she wrote. Then she qualified her claim of near-unanimity (emphasis mine): “I am asking every reasonable American to help me tell the truth…”

• The argumentum ad baculam, or argument from the club. This consists of attempting to persuade by making threats. Giffords urged “mothers to stop these lawmakers at the grocery store and tell them: You’ve lost my vote.” There’s nothing objectionable about that, but the same goes for both sides. And it is worth recalling that the “civility” hypocrites back in the day were troubled and outraged when angry citizens confronted their elected representatives at public meetings.

• The appeal to authority. That would be Giffords’ own authority as a former lawmaker. “I was elected six times to represent southern Arizona, in the state legislature and then in Congress,” she wrote. “I know what a complicated issue is; I know what it feels like to take a tough vote. This was neither.” No further support was offered for those assertions.

• The false dilemma. Her closing gambit: “To do nothing while others are in danger is not the American way.”

And the op-ed wasn’t the last that Times readers would hear from Giffords. The next day Jennifer Steinhauer trotted her out as the object of an argumentum ad misericordiam, or appeal to pity:

Senator Jeff Flake of Arizona was in an empty hallway in the Capitol on Tuesday when he bumped into Gabrielle Giffords.…Both froze in anticipation of the painful minute about to unfold.

Ms. Giffords, who had been fiercely promoting a background check bill for gun buyers, knew that Mr. Flake, a Republican and an old friend, had announced on his Facebook page the night before that he would not support the bill. So Ms. Giffords, who still struggles to speak because of the damage that a bullet did to her brain, grabbed Mr. Flake’s arm and tried—furiously and with difficulty—to say that she had needed his vote. The best she could get out was the word “need.”

Which raises an interesting question. Giffords’ op-ed was published no later than 9:03 p.m. Eastern time, when it first appeared in the Times’ Twitter feed. The Senate rejected the background-check amendment at 4:04 p.m. In between, at 5:35, Giffords appeared at Obama’s side in the Rose Garden.

How did she manage to write 900 words in fewer than five hours?