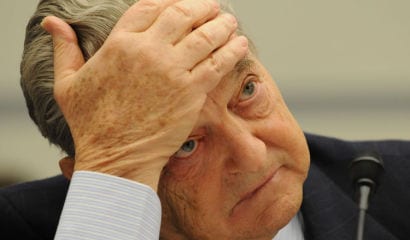 A New York Times account described the report as a “nonpartisan, independent review of interrogation and detention programs in the years after the Sept. 11,” without noting funding by Soros and other left-wing philanthropies for the Constitution Project, which it called a “legal research and advocacy group.”

The Task Force lamented there had never before in the U.S. been “the kind of considered and detailed discussions that occurred after 9/11 directly involving a president and his top advisers on the wisdom, propriety and legality of inflicting pain and torment on some detainees in our custody.”

Liberal Baptist ethicist David Gushee of Mercer University, who co-authored the 2007 National Association of Evangelicals’ condemnation of U.S. enhanced interrogation as “torture,” was a prominent Task Force member. He spoke at the Constitution Project press conference at the National Press Club in April, where the nearly 600 page report was released after a two-year investigation. The project was led by former New York Times reporter Neil Lewis, with consulting from former Times reporter Adam Clymer.

Unsurprisingly the Task Force concluded there is “no firm or persuasive evidence that the [the use of torture] produced significant information of value”; that the U.S. practiced under the Bush Administration what the U.S. and others had condemned by other governments as torture, including water-boarding, stress positions, extended sleep deprivation, sexual humiliation and prolonged solitary confinement; that this torture was authorized by the highest level political leaders; that the U.S. Justice Department’s Office of Legal Counsel “repeatedly gave erroneous legal sanction” to torture; and the U.S. “violated its international legal obligations in its practice of the enforced disappearances and arbitrary detention of terror suspects in secret prisons abroad.” It also accused participating medical professionals of violating their professional ethical obligations.

“The most important finding of this panel is that it is indisputable that the United States engaged in the practice of torture,” Gushee declared some days later when speaking at All Saints Episcopal Church, a prominent liberal congregation in Pasadena, California. “Being able to hold onto ones principles in times of crisis is a key mark of moral maturity both for persons and for institutions,” he said. “It’s precisely when we are in emergency situations that we most need our ethics and our laws.”

According to the Task Force, “There is substantial evidence that much of the information adduced from [torture] was not useful or reliable.” While speaking to Pasadena Episcopalians, Gushee said, “Does torture work? Well, maybe, maybe better than you know just a nice talking to. But no, we don’t torture children and we don’t torture anybody. Torture is a rare example of a practice that in international law is absolutely banned. No exceptions. So the fact that we have been seduced into having a conversation about whether it might be okay sometimes represents a terrible moral deterioration in our country.”

Gushee complained: “America the exceptional nation is not being very exceptional here.” Although the Task Force did not directly urge prosecution of Bush era officials, Gushee insisted they were guilty of violating U.S. and international law. He doubted any would be charged but observed, “Whatever decision is made about people from the past has to be in service of protecting the rule of law, human rights, and the best traditions of our nation.” Since then, Gushee has urged national “repentance” over detention policies.

The Task Force urged Guantanamo’s closure, with Hutchinson and one other member dissenting. It also likened U.S. torture practices to U.S. internment of Japanese citizens during World War II as a dark chapter that will be historically regretted. It did not allege torture under the Obama Administration but did criticize the Administration’s reluctance to release classified reports.

Treating terrorists as unlawful combatants not fully protected by the Geneva Conventions must not occur again, the Task Force warned. It urged Congress to “strengthen the criminal prohibitions against torture and cruel, inhuman, or degrading treatment” by defining torture to mean “an intentional act committed by a person acting under the color of law that inflicts severe physical or mental pain or suffering (other than pain or suffering incidental to lawful sanctions) upon another person within his custody or physical control.” It also wants lawful protections for all detainees against “cruel, inhuman and degrading treatment” that falls short of torture. The Task Force was funded with an initial start-up grant of at least $500,000 in 2011 (the last year for which figures are available) from Soros’ Foundation to Promote Open Society. The Constitution Project also received at least another $550,000 from Soros’ philanthropies between 2007-2011 for other projects. Opposing and discrediting U.S. enhanced interrogation and other aspects of the U.S. War against Terror has been a major focus for Soros philanthropy, including influencing religious groups, especially evangelicals. Soros gave over $1 million to the National Religious Campaign Against Torture, which ultimately in 2007 helped to generate Gushee’s “An Evangelical Declaration Against Torture: Protecting Human Rights in an Age of Terror,” and which the National Association of Evangelicals embraced as its own.

Soros got his money’s worth with this latest anti-torture report, which earned great media attention and virtually no critical analysis. Whether all detained terrorists merit the full protections of lawful combatants, or whether all aspects of enhanced interrogation qualify as torture, is debatable. But political initiatives funded by Soros, like the Constitution Project and its Task Force on Detainee Treatment, should be labeled as something more than “nonpartisan, independent,” “legal research.”