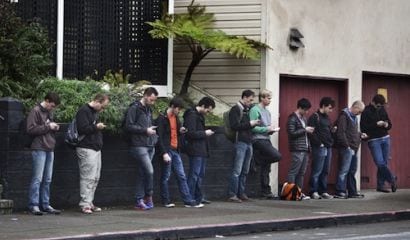 I have closely watched the up-and-coming generation, known as The Millennials, for 29 years now. That is the advantage of being part of a generation, I suppose. Joel Stein wrote an extensive piece on Millennials in the most recent issue of Time and he remains rather bullish on our potential.

I hesitate to share his optimism because of a paradox we seem to exhibit: Namely, that there are more avenues for us to entertain ourselves than ever before, yet we are more bored than ever before. It is this boredom that has led to a pervasive ennui amongst us.

Consider that 75 percent of Millennials have a social network profile and one in five has posted a video of himself online. Consider also that 78 percent of teens now have cellphones — with 48 percent of those phones being smartphones — and 95 percent of teens use the Internet. As of 2010, 67 percent of households had an individual who played videogames. In 2011, consumers spent $24.75 billion on video games, hardware, and accessories.

Entertainment has never been more diversified. We have more cable channels, critically acclaimed television shows, and formulaic movies than ever before. Beyond the small screen, Internet providers like Hulu and Netflix allow instant viewing of almost any movie or television program ever created. Kindles make any printed product accessible anywhere and iTunes allows for infinite music (as well as movie and TV) options.

Next to these technical amusements, there are of course, the old vices. Some are packaged in new ways, like pornography instead of “free love” or whatever the hippies called it. According to a 2009 study, single men watched pornography three times a week for an average of 40 minutes, while men in relationships watched it 1.7 times a week for around 20 minutes. That same study could not find a single man in his 20s who had never looked at porn. Millennial women aren’t off the hook either, as their consumption of pornography has increased as well. So while levels of premarital and promiscuous sex are slightly falling among Millennials, they are instead indulging in Internet-packaged sex at a level unheard of for other generations.

Social drinking, barhopping, and the party scene are also widely available for Millennials. These habits are something of a rite of passage for every generation, but Millennials seem to be extending this phase of life as they postpone marriage.

Some of this is undoubtedly due to The Great Recession. Millennials are having a difficult time finding jobs; only 47 percent of 16-to-24-year-olds are employed, the smallest share since government started recording data in 1948.

But do Millennials respond to these economic troubles by putting their nose to the grindstone and doing whatever it takes to make ends meet? Hardly. In fact, of the four generations Pew Research has data for, the Millennial generation does not cite work ethic as distinctive of itself. One in eight return to live in their parents’ homes. Millennials want to save the world, but they sit and wait for that world-changing opportunity to be handed to them. They find no satisfaction in the mundane. Instead of working 2-3 jobs, launching a business, or doing what it takes to succeed, they retreat. Millennials may be the first generation to have a lower standard of living than their parents, but with this response to adversity, perhaps deservingly so.

Much ink has been spilled in management books discussing how to get the most out of these youths in the workplace. Largely, they come to the same conclusion: Millennials are entitled, over-confident, and expect too much too quickly. We should not be surprised. Today’s young adults were raised by parents who made sure to boost their self-esteem at every turn, telling them they could achieve whatever they set their minds to, and handing out trophies for sixth place.

But what happens when this generation is not engaged in the workplace? It resorts to its amusements on the job. Eighty-five percent of Facebook users log on daily and half say they log on as soon as they open their Internet browser. Estimates of how much time users spend on Facebook per day ranges from 40-149 minutes. This leads to staring at useless information, more clicking, and ultimately less fulfillment on the job.

Thus, not only are our private lives filled with trite distractions, but now our workplaces are as well.

The result? Millennials are depressed. They are more likely to be told that they have a stress disorder or a depression problem than any other generation. It’s because we are bored! We have filled our lives with trinkets and toys, most of which appear on our screens, but all lack any real meaning or substance. Coincidentally, this generation is also the least religious, and that is a shame because faith is one of the few things that can lend real meaning to our lives. Despite all of this, Millennials have a great desire to make an impact. The cliché is that we want to save the world, but we want to do it from behind a computer screen.

So we continue to click keyboards, remotes and ourelves while wishing for more money. We continue down a road of mild depression. Perhaps this is why Millennials embraced President Obama so tightly in both 2008 and 2012. This generation supported him by a margin of two to one in 2008. The strong support came even though we are by-and-large not very political. Millennials wanted a savior who could make a difference in the world, but would not make us work very hard for it. The president’s messiah narrative was perfectly in tune with those desires.

However, it has not taken us long to become disenchanted with this president and the current state of politics in general. The president’s approval amongst younger adults has already fallen to 52 percent. That is a precipitous drop.

This generation has become a tepid, dispassionate mass waiting for someone to show it the way out. But Obama disappoints, the economy continues to tank, and all of our amusements serve to do nothing but distract us while a deeper longing continues to go unmet. The best we have been able to offer are “clever” insults and other forms of mocking on the Internet. This generation has to find its cornerstone on which to build meaning or we will simply be sitting in front of our screens waiting for another savior to save us from ourselves.