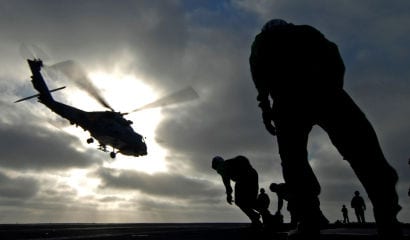 How much longer will we have to fight the war on terrorism? Last week the Assistant Secretary of Defense for Special Operations, Michael Sheehan, told a Senate hearing that “I think it’s at least ten or twenty years.” Wow. What a relief. Well, not really. Given the fact that we’ve been at it for over twelve years (seventeen if you start with bin Laden’s 1996 declaration of war against America), Sheehan clearly meant ten or twenty more years.

The answer to “How long shall we fight a war?” used to be answered simply: until we win. But nothing is uncomplicated, nothing fails to require careful parsing of words with the Obama regime at the helm.

Before we do anything else, we have to clarify the question posed to Sheehan not only to understand it, but to devise a policy that is most likely to achieve an answer that’s favorable to us. Which brings us to the concept of “outcome-based warfare.”

At its simplest, outcome-based warfare begins with the end: What do you want the world to look like when you’re done? That requires us to divorce ourselves from Obama’s most prominent national security doctrine: deadlines.

Deadlines and schedules are always arbitrary. Wars don’t begin on an immutable schedule or by accident. They begin when some ideology (or, as in Islam, an ideology passing itself off as a religion) or nation decides that its advantages make victory more likely than defeat. And they don’t end by accident either. They end when one belligerent (or alliance of belligerents) gets it through its thick heads that it’s been defeated. Not before.

For at least three reasons, if Sheehan were truthful, he’d have answered “I’m damned if I know” to the “how long” question. First, Obama & Co. have no vision of how the world should look after the war against terror. They can’t even define the enemy, for to do so correctly would reverse too many of their political calculations. Second, America hasn’t had, for at least eight or ten years, a process that would craft the defense and intelligence budgets in a manner designed to produce victory in this war. Third — and definitely not last — the enemy gets a vote in deciding when the war is over: he has to understand that he is defeated.

To answer the first question may be to answer them all, but let’s take the first issue first. It’s not at all clear that Obama accepts the concept of victory in this war despite the fact that victory is achievable. The Obama regime has no concept of victory. The president has said he’s not about achieving it. And our allies have no concept of it either. Even the Israelis give no evidence of understanding, apparently being focused on survival rather than victory.

Let’s not be Pollyannaish. We can, by decapitating their leaders and investing so much in intelligence to blanket most of the globe, kill the terrorists faster than they can recruit people (and killing them does dampen the enthusiasm of even the most rabid recruit). But that will not return us to a 9-11-01 status quo ante.

As I wrote on that horrible morning, our enemies are both the terrorist groups and the nations that sponsor them. So far, in twelve years of war, Iran remains untouched. And to mention just a few others, Saudi Arabia’s terror funding continues, Syria is destabilized and soon to be dominated by Assad again or by other terrorists, and free-range terrorists — including al Qaeda — are everywhere from Libya to Somalia to Mali to Yemen and so on ad infinitum.

To name just a few terrorist groups, the Muslim Brotherhood has put paid to the idea of Obama’s “Arab Spring” bringing democracy to the Arab world. Al Qaeda founder bin Laden is still dead but his organization is still very much alive in Iraq, Libya, and so many other nations. Hezbollah is armed with tens of thousands of rockets and missiles that threaten Israel. Its tentacles are spreading, now to Syria and elsewhere. Venezuela is hosting Hezbollah terror training camps, according to credible reports too numerous to mention.

So even with an enormous investment in intelligence, we would be left with the idea Vichy John Kerry had in his 2004 presidential campaign, some sort of a terrorist “overwatch” to keep an eye on terrorist groups and presumably blow them up whenever two or more of them should gather. But that, too, is not victory.

Victory means that Islamic terrorism — now and for the foreseeable future — could not cross international borders. That is the outcome at which our outcome-based warfare should be aimed. If Islam will keep its wars to itself, we have no quarrel with it. Otherwise, it is our duty to make war on everything the enemy holds dear both kinetically and ideologically. As I’ve written here often, we cannot defeat the terrorists and their sponsors without demonstrating to the world the bankruptcy of their ideology.

Which means we need not only shed Obama’s dedication to deadlines but we also have to get rid of the idea that Islam and its doctrines are beyond criticism, mockery, and everything else we value as free speech. But this isn’t only a First Amendment question. It has to be a primary goal in our outcome-based warfare.

In the same context as Obama’s cluelessness about how long we need to fight is how we’re going to do it. Which brings up the Pentagon and intelligence budgets.

As I’ve written time and time again, we’ve been guessing at what our defense budget should be. And now we’re doing something worse. We’re not even asking how much we should be spending on defense; we’re letting Obama and Chuckie Hagel set the Pentagon budget not in terms of what we need, but only in terms of what they think should be cut.

Last year we gave too short shrift to the question of which missions we’d sacrifice to the budget cutters. Now it’s apparently too late. Which missions are being sacrificed in favor of others? Too many ships are held in port, too many squadrons of fighters, bombers, and tankers are grounded. Like the helter-skelter budget cuts, there’s no plan or rationale for which missions we’re cutting. And that makes planning for our outcome-based warfare an illusion. You simply cannot do it.

And that, with an unaccustomed awkwardness (unaccustomed before Obama, that is), we come to the last question. How can the enemy be convinced that it is defeated?

In short, if we continue on this path he cannot. There is no reason for the terrorist groups and their nation-state sponsors to believe they have been defeated while we daintily decline to even think about winning. They watch, amused, while Obama fusses and fumbles to determine how little defense we can get away with. They haven’t, since 9/11, been able to bring a massive-casualty attack inside our shores. But they can and will dream of the day when they can do it again, and they will.

Which means, in the end, that there is no foreseeable end to this war while Obama’s policies prevail. Ten years, twenty, or a hundred years from now we will still be at war. Unless we have, by then, been defeated.