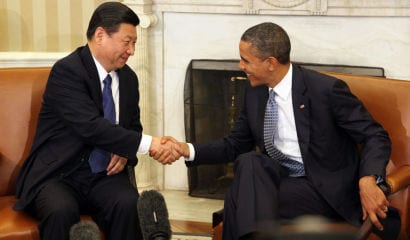 Beijing’s leadership expertly follows a tricky path of maintaining close financial and commercial relations with Washington while simultaneously strutting about militarily. American businessmen and visiting politicians are wined and dined by well-connected Chinese counterparts in the luxurious restaurants and clubs that have proliferated in modern Chinese cities. Meanwhile military exercises on land, sea, and air against pretend U.S. aggressors are a constant feature of the People’s Liberation Army (PLA). The lavish entertainment in the commercial world acts to mask the sharp differences between the two countries in political military affairs.

At the same time the considerable commercial interests of family members of key political personalities reach all the way to the top. This fosters the illusion that profitable relations with well-connected personalities will not only be beneficial in financial terms to both sides but also serve as a positive step strategically. It is well known that the new president, Xi Jinping, has family members whose prosperity has risen alongside his political fortunes. This is par for the course: Wen Jiabao, the former premier, famously had “advantaged” his relatives to the point of ostentation. In communist China these days this is not corruption; it’s simply recognition of tradition. The problem is that similar “traditional” guanxi reaches down to the lesser levels and becomes what Xi Jinping reportedly was referring to in his first official speech of November 2012 as “the need to crack down on rampant corruption and bribe-taking.”

There is virtually no area of Chinese business and politics that has been untouched by public financial scandal. The situation has become so bad that fighting corruption has taken precedence over economic policy development. When former Vice-Premier Wang Qishan was named to the standing committee of the politburo he was specifically charged with heading the instrument that investigates party members suspected of corruption. Wang, who is well known to foreign bankers as one of the nation’s leading economic planners, is also known for his scrupulous incorruptibility.

Mr. Wang will have his hands full in a government where his new boss, the highly personable Xi Jinping, has been known for years as a conduit for deal-making in equipment acquisition for the People’s Liberation Army. Mr. Xi previously was the principal politburo liaison with the PLA command. His relationship with the PLA goes back many years to when he was a young man doing his military stint acting as the personal assistant to the man who was then defense minister, Geng Biao.

As has been well known for a long time, the leadership, active and retired, of the PLA controls through board seats large portions of many corporate enterprises. In fact, a good number of these private enterprises are effectively owned by the PLA through share holdings of intermediaries. The contracts for defense operations are screened through this Byzantine proxy ownership, which is one of the means by which top ranking politburo personalities share in China’s economic successes.

The reality is that the PLA acts as a military outreach for China’s economic interests. Beijing is preoccupied with the gas and oil deposits located in the seas off its mainland far beyond any 200 mile international limit. The territorial disputes in which Beijing is involved include conflicts with Japan, Vietnam, Philippines, Borneo, Brunei, and, of course, Taiwan. The Chinese navy in particular (PLAN) is charged with maintaining a presence throughout areas subject to territorial disputes. In 2012 a Chinese naval vessel actually ran aground off what was termed “a spit of land” in the South China Sea claimed by both Manila and Beijing. This incident at the Scarborough Shoal caused much diplomatic shouting and hand-wringing, but nothing else. Similar incidents in the future may be more confrontational.

The Japanese navy frequently reports testing confrontations with Chinese warships in the Miyako Straits that provides passage through a chain of small Japanese islands. While most of these islands are used primarily as fishing ports, international oil companies and mining consortia for many years have had interest in the possibility of finding serious deposits of oil, gas, and other minerals either underwater or on the islands themselves. Leaders in Beijing are, one might expect, keeping their eyes on all such explorations.

Recent reports have emphasized the hyperactivity of China-based cyber intrusions. Here, too, is a confluence of the military and the civilian. While Beijing has an obvious interest in gaining access to U.S. and Western defense technology and intelligence information, it has increased its attention in cyber-interception in the various civilian product development fields. As the old expression goes, one hand washes the other. As early as 2009, Northrop Grumman reported on the interface of Chinese military and civilian cyber espionage activities. Since then it has become obvious that the PRC has, as Mike Rogers, chairman of the House Select Committee on Intelligence, has put it, “reached a level of sophistication and are clearly supported by a level of resources that is…a massive and sustained effort by a government to blatantly steal commercial data and intellectual property.”

One can be sure that family and friends of the Standing Committee of the Politburo — among others — will get a piece of that action. Chinese communism has evolved a new form of private enterprise — for its commissars.