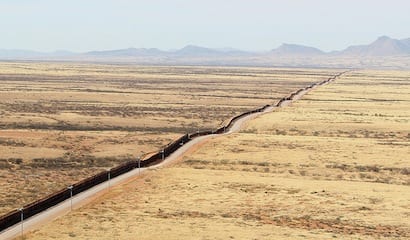 Only in the United States Congress could a legislative provision entitled “Market-Based H-1B Visa Limits” actually mean that “the number of visas calculated under subparagraph (A) for any fiscal year shall not be less than 110,000 or more than 180,000.”

If you read even a few pages of the so-called Gang of Eight immigration bill trudging its way through Congress—a bill that contains many provisions as horrendous as that one–you can’t help but think of Otto von Bismarck’s famous sausage-making analogy and wonder “who the hell wrote this mess?” The answer, sadly but not surprisingly, is special interests, namely the Chamber of Commerce and big labor unions. Speaking on background for this article, an aide to a Senate Judiciary Committee member put it plainly: “Neither the Chamber nor the AFL-CIO is interested in a free market. The Chamber is interested in delivering for their big business cronies and labor is interested in protectionism. So they work out a secret deal together, and that’s how our legislation gets made.” It is a frightening shotgun marriage that embodies the old tale of two wolves and a lamb voting on what to have for dinner. And guess who’s the lamb, my fellow citizen.

Much of the debate about the bill centers on legitimate questions of cost and border security along with illegitimate concerns such as unions’ desire to allow increased immigration only to the extent that they can capture more dues-paying members.

Some opponents of the current legislation yell “secure the border first!” (a not inappropriate suggestion that bill drafters claim to be working into the text) while some supporters, through crocodile tears, bemoan cruel racism in the dark hearts of those who have the temerity to think that borders matter at all. In a time of trillion-dollar deficits, hearken back to Milton Friedman’s warning that “It’s just obvious that you can’t have free immigration and a welfare state.”

And while cost and national security are indeed of critical importance, there is an even bigger and so far not well-answered question: Does the proposed bill actually improve our immigration policy? More specifically, does it abide by a set of fundamental economic principles that history has proven are necessary for the success of any piece of public policy that impacts the economy—which, its other implications aside, immigration certainly does?

In short, does the plan move us substantially toward a free-market solution?

Small “breakthroughs” notwithstanding, quotas, price fixing, price controls and other forms of central planning have tended, with the obvious and disastrous exception of President Nixon’s wage and price controls, to be the province of Democrats. Republicans on the other hand at least claim to support free markets. They decry the expanding bureaucratic state that gives us, just as one example, the ultimate price control: Obamacare’s IPAB, famously termed a “death panel” by Sarah Palin.

And yet the proposed “bipartisan” Gang of Eight legislation includes the creation of a Soviet-sounding “Bureau of Immigration and Labor Market Research” that will spend millions of dollars each year “to determine the annual change to the numerical limitation for nonimmigrant aliens…to supplement the recruitment methods employers may use to attract such nonimmigrant aliens…to designate shortage occupations in zone 1 occupations, zone 2 occupations, and zone 3 occupations” and to generally micromanage what should be a contract freely made between any willing employer and willing employee.

Does anyone else feel like the Obamcare model of government control is being adapted, with little improvement, to immigration policy?

The legislation would be anti-capitalist enough if its quotas were sufficiently high to allow most of the likely demand for foreign labor by American employers. But this is a bill that limits visas for construction workers to 15,000 per year and those for “qualified immigrants seeking to enter the United States for the purpose of creating new businesses” to 10,000 per year. These are just two of the measure’s various “not to exceed” limitations, which fly in the face of economic liberty and historical commonsense.

To wit, when the demand for unskilled or semi-skilled workers exceeds government quotas, the laborers find a way to come here illegally. And when government prevents investors and high-skilled workers–who are presumably less likely to violate the law because they have more to lose–from putting their capital and talent to work here, they will simply create jobs elsewhere, and Americans will find a way to “offshore” at least some of the work they need done.

Quotas proposed by the Gang of Eight bill represent small fractions of the actual demand for labor across the American economy. If a key goal of immigration reform is to decrease the number of attempts by would-be workers to cross our borders illegally and instead to give a legal path to work here (separate from any question of a path to citizenship), this bill simply cannot succeed.

This is not just an economic issue; it is also a national security issue. The more demand there is for illegal passage across our border, the more illegal passageways will be created, leaving a border both more porous and more crowded. Thus, quotas so low as to be meaningless make it easier to for a terrorist to cross into the United States among the throngs who, under any rational policy, would be processed through an employment office rather than occasionally intercepted scurrying through a tunnel or over a wall.

With labor costs rising in large Asian nations that had previously supplied less expensive higher-skill workers, offshoring will become marginally less attractive. But that doesn’t mean the result will simply be more jobs for Americans in America. After all, the existence of higher-paid workers in other nations means more and richer customers in other nations. So the result is increasingly likely to include an American brain-drain, as our mindless, non-economic limitations on immigration into the U.S. cause rational, profitable emigration out of the U.S.

To be sure, both low-skill and high-skill immigrants who come to the United States can negatively impact the wages of individual Americans competing for the same jobs. Foes of immigration expansion trumpet these cases loudly. Despite a questionable Heritage Foundation report, however, the majority of studies on the impact of immigration on Americans who have above a high-school education show a distinctly positive effect for the nation as a whole. (See here, here, and here among many other examples.)

To use an economic term, increased immigration may not be a Pareto-optimal improvement, but it is an improvement nonetheless: The nation gains economically, but that does not mean there are no losers in the process.

And thus we get to the fundamental problem in the immigration debate–and in almost every other public policy debate in a nation whose central government does far too much for far too many: concentrated benefits and diffuse costs.

Imagine this situation: A defense manufacturer wants a government contract for a $300 million satellite for a mission that might be useful but is certainly not critical. That contract would earn the company $30 million in profit while costing every American a single dollar. It’s true that many Americans pay no taxes, so the actual distribution of $300 million cost will be steeply skewed. Nevertheless, how many Americans will spend time or money lobbying Congress to forego the satellite? Versus how many millions of dollars will the company spend lobbying in favor the contract?

Similarly, if the American economy would stand to gain tens of millions, or tens of billions of dollars from immigration reform, increasing jobs and opportunity across the nation, but thousands of individual workers would suffer declines in their incomes, which will be the louder, more aggressive voice?

The reality is that our immigration system is broken, that most politicians realize at least this much, and that Republicans feel the need to pass something in a desperate attempt to gain support among a rapidly growing Hispanic electorate (though it is unproven that a bill like the Gang of Eight’s would accomplish that goal).

Something must be done. But for those who believe that Republicans may just be adding to their long, dreary record of “compromise first, principles perhaps later,” one must wonder whether this legislation—proposed as much because it will make people think something good has been done as because of what it will actually do–is the right answer.

In the spirit of suggesting a solution rather than just complaining about a problem, a particular reform plan comes to mind: the Red Card Solution. It focuses on creating a guest-worker program, a move that, despite being opposed by the most aggressively anti-immigrant forces as well as by big labor, is the lynchpin to successfully restructuring our dysfunctional immigration system.

A key assumption of the Red Card Solution, as stated in a white paper (should it be a red paper?), is that “the vast majority of illegal workers in the U.S. are not here seeking citizenship, or even permanent resident status…The debates about ‘illegal immigration,’ and solutions proposing a ‘path to citizenship’ fuel deep-seated concerns about amnesty–and even voting rights–for people whose only qualification is a blatant defiance of the law. However, since this is not the objective of most illegal aliens, a program to provide legal non-citizen work permits for these people does not require a significant change in immigration laws.”

This assumption is difficult to prove. One recent, but small, survey suggested that nearly 90 percent of illegal immigrant Hispanics would apply for citizenship if they could. That said, it stands to reason that what most illegal aliens want is the ability to provide labor and earn a living without fear of jail and deportation. They would still want that if a path to citizenship were unavailable or very burdensome or expensive. We should move in that direction for our sake, not for theirs.

The only possible reforms that can meet this test are those based on free-market supply and demand forces and that leave as little decision-making as possible in the hands of bureaucrats, Congressmen, and rent-seeking lobbyists. The Red Card Solution aces the test, and for that reason alone is today the best immigration reform plan I am aware of.

It is hard to say whether the Gang of Eight bill is better than nothing. If this is the case, it is so primarily in a political sense rather than a policy sense. But when you have legislation drafted by K-Street bagmen and supported more for its compromise than its adherence to any economically sensible principles, Americans shouldn’t be surprised when they end up disappointed.