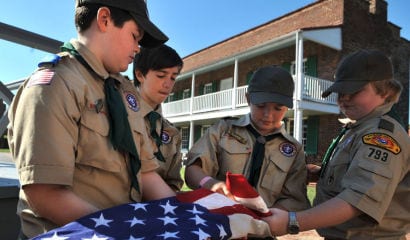 Despite the pleas of many religious leaders, the Boy Scouts of America National Council has approved a new membership policy of “non-discrimination” based on “sexual orientation or preference.”

During the session of 1,400 delegates, the BSA’s general counsel was reportedly unable to answer what this policy means for transsexuals. Cross-dressing Scouts? Only one of countless issues that inevitably now will arise under the rubric of protected “orientation or preference.” For a more likely scenario, how about teenage Scouts wanting openly to celebrate their pornographic interests? Could Scout leaders, many of them church based, object without inflicting “discrimination?”

About 70 percent of Scout units are church hosted, prompting about a dozen heads of or spokespersons for denominations—collectively including nearly 25 million members—to urge against the new policy. Among them were the Southern Baptist Convention, the Assemblies of God, the Lutheran Church Missouri Synod, the Free Methodist Church, and the Church of God.

“Few, if any, are suggesting the Boy Scouts kick out boys based on their particular temptations,” commented Southern Baptist leader Russell Moore. “But this change is more than this. It doesn’t speak in terms of temptations but in terms of the claiming of a sexually politicized identity as morally neutral.”

Correct. The Boy Scouts, heroically retrograde for so long, have now surrendered to mind-numbing sexual political correctness. Its prohibition against openly homosexual Scoutmasters likely will not last long, since the forces of cultural conformity that BSA seeks to appease will demand that it be stricken.

Church-sponsored Scouting troops “will be pressured to mute a definition of ‘morally straight’ that includes a sexuality intended only for the lifelong one-flesh union of a man and a woman in marriage,” warned Moore, a theologian who’s becoming the head of his church’s Ethics and Religious Liberty Commission. “Depending on how radically the BSA applies this new policy to local troops, I suspect many will be seeking an alternative to the Boy Scouts to train up boys toward a life of virtue.”

Moore’s retiring predecessor, Richard Land, was even more emphatic. “Frankly, I can’t imagine a Southern Baptist pastor who would continue to allow his church to sponsor a Boy Scout troop under these new rules,” he said, predicting “there will be a mass exodus of Southern Baptists and other conservative Christians from the Boy Scouts.”

A statement from the 3 million-member Assemblies of God concurred: “We agree with the BSA that we need to demonstrate compassion and welcome those who are struggling with sexuality issues, but not in a way that condones such behavior, which is what the new BSA policy does.” And it likewise predicted: “We believe that the BSA policy change will lead to a mass exodus from the Boy Scout program, as Assemblies of God and many other churches can no longer support groups that are part of an organization allowing members who are openly homosexual.” It cited as an alternative its own Royal Rangers group, which is similar to the Southern Baptist Convention’s Royal Ambassadors, as a “mentoring program” offering “Christlike character formation and servant leadership development for boys and young men.”

More cautiously, the chair of the National Catholic Committee on Scouting said after the BSA vote that the Church’s teaching “is clear that engaging in sexual activity outside of marriage is immoral,” and his committee will study the impact of the new policy on church Scouting before it activates in 2014. Catholic Bishop Paul Loverde of Arlington, Va., predicted his diocese likely would reconsider the 50 Scout troops its parishes sponsor.

An internal BSA report had admitted that abandoning its sexual standard for leaders and members could precipitate a membership decline in the hundreds of thousands. The report didn’t address the impact of changing only the membership policy. But almost certainly it will accelerate the BSA’s already steep drop from 3.4 million members in 2000 to less than 2.7 million in 2012, a fall of over 20 percent. The Canadian Scouts, after sexually liberalizing 15 years ago, lost 50 percent of their members.

Of course, officers of declining liberal denominations encouraged BSA to abandon its standard and embrace their own imploding example. The president of the United Church of Christ, which has lost about half its membership, urged BSA to adopt its own policy of “extravagant welcome,” without mentioning that UCC-style inclusion has lost the once influential church over a million members. Evidently such aggressive, politically correct hospitality can be costly. Or perhaps just enervatingly boring.

A male-only organization still steadfastly devoted to Victorian masculinity and Christian virtues could have become ruggedly countercultural and therefore appealing to many youth no doubt bored by their often emasculated schools and churches. Instead, the BSA corporate culture seems determined to echo the preening voice of the sort of nagging school guidance counselor whom every adolescent boy dreads and seeks to avoid.

So instead, the BSA is deciding the follow the disastrously predictable path of once mainstream but now dying institutions like the Episcopal Church, which gets occasional media plaudits for its sexual liberalism but is otherwise ignored. And like the Episcopal Church, the BSA of the future, after losing a million members or so, will probably rely on the endowments of the dead rather than the active interest of the living, much less the very young.