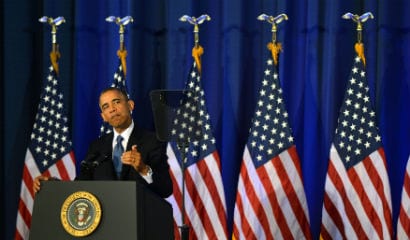 It was only last week that I posed the question of how long the war the terrorists are waging against us will continue. President Obama answered that question in his 23 May speech at the National Defense University. His answers should scare the hell out of you.

My question was posed in the context of the answer given by Assistant Secretary of Defense for Special Operations Michael Sheehan in a congressional hearing the week before my column appeared. His answer to the “how long” question was “I think it’s at least ten or twenty years.” Sheehan was clueless. And so is Obama. The president has proclaimed a lack of interest in victory, and like Sheehan, he cannot describe–as “outcome-based warfare” doctrine requires–what the world should look like when the war is over.

But now we know how Obama will answer these questions and the question of how he will handle national security during his remaining years in office. As usual, his speech was burdened with contradictions but not to so great an extent that it disguised his clear intentions.

Near the beginning, and at various points throughout the speech, Obama said that we are still threatened by terrorism–“from Benghazi to Boston”–and that we need to continue our fight against al-Qaida and its allies. And, of course, we do because those enemies–al-Qaida, Hizballah and so many others–have not been defeated. Not to be bothersome about it, but neither have Iran and Syria, which are two of the major sponsors of Islamic terrorism.

Obama said, “We must define the nature and scope of this struggle, or else it will define us. We have to be mindful of James Madison’s warning that no nation could preserve its freedom in the midst of continual warfare. Neither I nor any president can promise the total defeat of terror. We will never erase the evil nor stamp out every danger to our open society.” Evidently he wants to reduce terrorism to a level we can tolerate. Really?

And, most of all, Obama wants to repeal the legal authority for us to conduct this war. He believes the 12-year old Authorization for the Use of Military Force has outlived its usefulness. He said, “So I look forward to engaging Congress and the American people in efforts to refine, and ultimately repeal, the AUMF’s mandate. And I will not sign laws designed to expand this mandate further. Our systematic effort to dismantle terrorist organizations must continue. But this war, like all wars, must end. That’s what history advises. That’s what our democracy demands.”

Let’s take these things one at a time. First, while admitting that the terrorist enemy hasn’t been defeated, Obama is ready to repeal the AUMF. There’s only one problem with that: The enemy gets a vote in when the war is over, and if the enemy isn’t defeated, his vote is a resounding “no.”

Obama said repeatedly that al-Qaida and its allies were still a major threat. (He said their “core” is on a “path to defeat in Afghanistan and Pakistan.” Which means they–with their Taliban allies–still can achieve victory in both nations. Obama said that we would rely on Afghan security forces to ensure that “…al-Qaida can never again establish a safe haven to launch attacks against us or our allies.” Good luck with that.)

If, as Obama admits, al-Qaida and its affiliated forces are determined to keep fighting (as the four victims in Benghazi would testify if they were alive, al-Qaida and its allies manifestly are) there are only two choices. Either we fight until they are defeated, or we lose the war.

Obama means to establish a Kerryesque terror “overwatch” strategy, as Kerry proposed in his 2004 campaign. But how do you reduce terrorism to a tolerable level?

That’s not possible to do, unless Islamic terrorism is so limited so that it cannot again reach the United States or our allies. But that’s a quixotic dream. Islamic terrorists are never long content with killing each other and innocent civilians in their world. Our intelligence operations will never be good enough to spot every terrorist cell that wants to blow up a U.S. airliner, a nightclub in London, or a seaside restaurant in Israel. The ideology that is Islam requires it.

It may be politically impossible for Obama to undo the AUMF in whole or in part. The reason for that is that Obama is trying, again, to create a political fiction. The war isn’t over just because he says it is. It’s only over when we win or lose. And while we are aghast at Obama’s approach to terror, we’d better pay more attention to what may be another Obama assault on our constitutional freedoms.

Unreported by the media, Obama’s speech included a proposal for a “Privacy and Civil Liberties Board.” What is that? In Obama’s words, speaking about why we don’t deport people or imprison them without evidence, he said “That means putting careful constraints on the tools the government uses to protect sensitive information, such as the state secrets doctrine. And that means finally having a strong Privacy and Civil Liberties Board to review those issues where our counterterrorism efforts and our values may come into tension.”

Questions of the rights to privacy and the civil liberties our constitution preserves for us are not for some board appointed by any president, far less by one who has shown such utter contempt for our freedoms. Those questions are for American courts. Any attempt to change that fact would be unconstitutional, and should be rejected utterly.

There was much more to Obama’s speech: Guantanamo Bay; his drone war; supporting the “transitions to democracy” in Egypt, Tunisia and Libya; his war on Fox News.

On Gitmo, Obama’s muddle-headed thinking was a lot to bear. First, he said that the governments of nations such as Somalia and Yemen have no real control of their own territory. But he then went on to say that, in his zeal to close Gitmo, he was lifting the ban on prisoner transfers to Yemen, which is the equivalent of turning terrorists loose.

And Obama hasn’t given up on moving the rest of the denizens of Gitmo to the United States. He’s ordered the Defense Department to designate a site within the U.S. where military commissions could be held. He and Eric Holder apparently haven’t given up on their idea that Khalid Sheik Mohammed, and the rest of the worst, should be tried in the U.S.

Congress will reject this, loudly and soundly. House Armed Services Committee Chairman Buck McKeon (R-CA) has nearly laughed this idea out of town.

Obama has taken control of his drone war away from the CIA and given it to the Pentagon, subjecting it at the same time to what is described as greater congressional oversight. This is problematic because the Defense Intelligence Agency is being decimated by budget cuts and the CIA may not always play nicely with the Pentagon. This was tried before, and didn’t work. I’m not hopeful.

It is laughable for Obama to continue droning on about supporting “transitions” to “democracy” in some of the worst hellholes in the Middle East. The Muslim Brotherhood–which, pace John Brennan, is not a non-secular, non-violent group–runs Egypt and that is sufficient to make a mockery of the idea that Egypt has any chance at democracy. Once the terrorists work out which of them will rule–for the moment in Syria, Mali, Somalia, Tunisia and the rest–we’ll need more UAVs blowing people up and fewer of Obama’s droning comments there.

Though drones haven’t yet been deployed against Fox News, Attorney General Eric Holder personally approved a search warrant to seize the e-mails of Fox reporter James Rosen and Rosen’s parents. This included a statement in the search warrant that Rosen was a “co-conspirator” in the leak of classified information, implying that he could yet be indicted.

Obama also said that, “Journalists should not be at legal risk for doing their jobs. Our focus must be on those who break the law.” That would be a lot more encouraging if it weren’t worded in such a weasely manner. Who broke the law? Not a journalist such as Rosen who reported a story and did his job. Fox News should receive our support for not knuckling under to this assault on the First Amendment.

Obama’s speech said that the war on terror is over, that we’re going to turn terrorists loose, and that we’re going to keep watch over about half the world with armed drones to kill the terrorists we have truly excellent legal reasons to kill. And, oh, by the way, we might like to retain a free press, as long as it agrees with us.

Is anyone, other than me, appalled by all this?