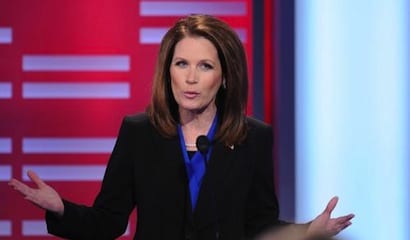 Michele Bachmann’s announcement that she won’t run for re-election in 2014 may hurt Democrats who hoped to use her rocky political record against her in that congressional race.

In an eight minute video released yesterday, the Minnesota congresswoman insisted that early polls showing a tight race and a federal investigation into her 2012 presidential campaign did not factor into her decision.

“Be assured, my decision was not in any way influenced by any concerns about my being re-elected to Congress,” Bachmann said on the video. “I’ve always in the past defeated candidates who are capable, qualified and well-funded, and I have every confidence that if I ran, I would again defeat the individual who I defeated last year.”

The controversial four-term congresswoman’s abrupt withdrawal from the state and national stage will leave a void in the media and legislative arenas that political observers on both sides agree will be hard to fill.

Love her or hate her, even Bachmann’s detractors admit she established herself as an effective communicator of the conservative message, a fundraising powerhouse who commanded a powerful grassroots network. Just two weeks ago, the Bachmann shared a Capitol Hill lectern with Senate Minority Leader Mitch McConnell to launch an effort to repeal Obamacare. In April, she was one of three members of the U.S. House at the funeral of Margaret Thatcher.

Behind the scenes, however, Bachmann’s take-no-prisoners style was often viewed as a distraction that rallied the opposition and made life more difficult for some Minnesota Republicans.

Bachmann’s decision against running for a fifth term immediately re-calibrates the race for the state’s sixth congressional district next year.

Her onetime opponent, millionaire Democratic businessman Jim Graves, lost in 2012 by less than 4,300 votes in the Republican-leaning district in central Minnesota. This morning a photo of Bachmann and appeal for donations still appeared on the campaign website for Graves, who had already announced his intention to challenge Bachmann again.

“The polling information wasn’t very favorable for her, and I think the pathway to victory was almost impossible,” Graves told the Huffington Post. “We’re all happy. This is a good day for America. Quite frankly, there’s no room for a theocracy. We’re a democracy. From that standpoint, I do have a smile on my face.”

Strategists say it’s not a good day, however, for Graves’ chances to wrestle the seat out of the Republican column.

“Graves doesn’t have Bachmann to run against and partly I think he was benefiting by her being a lightning rod,” said political analyst David Schultz of Hamline University. “So now he’s got to worry about perhaps now there may be another Republican running who’s less of a lightning rod and doesn’t come with all the baggage Bachmann has.”

“Jim Graves’ candidacy is based on the fact he’s not Michele Bachmann,” said Ben Golnik, a Republican consultant. “Graves went from a slight shot to virtually little chance of winning against a Republican candidate with a fresh slate.”

The loss of Bachmann also complicates Democratic messaging and fundraising well beyond the borders of her district. “Bachmann has been a great boon for Democratic fundraising and MSNBC has loved her,” Schultz said. “She’s become basically the person they get to rail against for ratings and to fund raise against and in the state of Minnesota she has been part of the face of the Republican party in Minnesota for the last eight to ten years. Her leaving just makes it harder for people to identify a boogeyman to run against.”

Reprinted with permission from MinnesotaWatchdog.org.