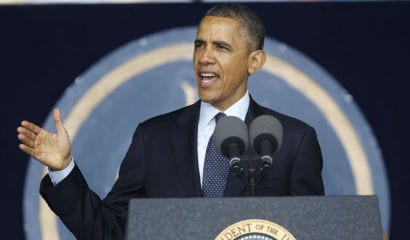 Admirers sometimes say that Barack Obama is too cerebral in not letting his emotions show. But he went all gushy in one telling moment in his speech last week at the National Defense University. That was when he paused to consider the “hard fact” that even the most carefully considered unmanned strikes against known terrorists occasionally result in civilian casualties. Said the president:

And for the families of those civilians, no words or legal construct can justify their loss. For me and those in my chain of command, those deaths will haunt us as long as we live, just as we are haunted by the civilian causalities that have occurred throughout the conventional fighting in Afghanistan and Iraq.

So the president is “haunted” by the notion that a Predatory drone that incinerates a car carrying a leading figure in al Qaeda might at the same time kill two or three innocent people — guilty only of being only a close relative, confidant, or friend of the targeted terrorist… as, for instance (in a different context), Eva Braun would have been to Hitler.

Like St. Augustine praying for purity of thought (“God, give me chastity — but not just now”), Obama spent a good portion of this speech calling on the Congress to prevent him from engaging in any wanton overuse of unmanned strikes in taking out high-value terrorist targets. “Unless we discipline our thinking, our definitions, our actions,” he said, “we may be drawn into more wars we don’t need to fight or continue to grant presidents unbound powers more suited for traditional armed conflict between nation states (emphasis added).”

It is time, the president went on to say, for Congress to “refine and ultimately repeal” the Authorization to Use Military Force, or AUME, which was passed immediately after the United States was attacked on 9/11/2001.

He also renewed his longstanding call for closing the detention center at Guantanamo Bay, and he announced that he is lifting the moratorium on detainee transfers to Yemen “so we can review them on a case-by-case basis.” As it happens, al Qaeda maintains a major presence throughout much of Yemen, and controls large towns and small cities in parts of the country. In fact, Yemen is poised on the brink of civil war. To send Gitmo detainees back to Yemen is, almost surely, to send them back to al Qaeda — and to provide new recruits to the cause of killing Americans.

Too bad the president doesn’t seem to be able to muster the same finely tuned emotion for our soldiers, sailors, and airmen that he reserves for civilian casualties and the untried and uncharged detainees at Gitmo.

As Daniel Henninger noted in his Thursday column (“Obama’s Dangerous Confusions”), the president suggested in other speeches over the long weekend (at the Naval Academy’s commencement in Annapolis on Friday and at Arlington Cemetery on Memorial Day) that our warfighters had been condemned by his predecessor to “perform crap missions from which no good came.”

“Before you arrived here,” he told them, “our nation was engaged in two wars, al Qaeda’s leadership was entrenched in their safe havens, many of our alliances were strained, and our nation’s standing in the world had suffered.” He is saying: The midshipmen who preceded you served under a president, George W. Bush, whose commitments were mistaken or failed. And now, “over the past four years, we’ve strengthened our alliances and restored America’s image in the world.” What strangely conflicting and partisan thoughts for a president to put in the minds of midshipmen headed into service, presumably for all the people of the United States.

There is no hint of genuine purpose or real achievement in Obama’s words to the midshipmen, and part of the reason for that is the persistent fallacy on the president’s part of thinking that we are in the process of winding down the threat to world peace and our own security posed by terrorism and the continuing resurgence of Islamic fundamentalism, which originated with the Prophet Muhammad and which, in its contemporary form, traces back more than three decades to the Ayatollah Khomeini and the Iranian revolution (and before that to the teaching of U.S.-educated Sayyid Qutb).

“I was ordered to fight all men until they say ‘There is no god but Allah.” So said Muhammad in his farewell address in 632.

“We will export our revolution throughout the world . . . until the calls ‘There is no god but Allah and Muhammad is the messenger of Allah’ are echoed all over the world.” So said the Ayatollah Khomeini in 1979.

The great Middle Eastern historian Bernard Lewis says that he was not at all surprised by the attacks of 9/11/2001 … or of any of the atrocities since then. Muslim fundamentalism begins with a fervent desire to reverse the de-Islamization of Islamic countries. But it moves from there to desire to establish a universal Islamic community. As Lewis wrote in his latest book Notes on a Century

As the militants saw it, they had completed the first phase on the path to Muslim domination — the expulsion of the infidels and their armies from the lands of Islam. The next and final step was to carry the battle to the enemy’s homeland to inaugurate the final struggle between the true believers and the unbelievers for the mastery of the world and bring about the universal triumph of their cause.

Obama’s deconstruction of the terrorist threat — in which he repeats the mantra that “Osama bin Laden is dead and al Qaeda is on the run” — would be foolish even without the recent reminders of Benghazi, Boston, and horrific public mutilation and killing of the soldier outside his barracks in London.

He simply ignores the broad appeal of Muslim fundamentalism to hundreds of millions of people — and the deeply felt hostility of all who subscribe to it, to others who do not share the same beliefs. It is of course true that only a small percentage of Muslim fundamentalists are terrorists, but neither are they the declared enemies of terrorism. Many or even most are in open sympathy with the terrorists.

In his 23 May speech, Obama declared:

Most, though not all, of the terrorism we face is fueled by a common ideology, a belief by some extremists that Islam is in conflict with the United States and the West and that violence against Western targets, including civilians, is justified in the pursuit of a larger cause. Of course, this ideology is based on a lie, for the United States is not at war with Islam.

But where is the real “lie” here?

Like it or not, we are in an ongoing war with a numerous and determined foe who wants to do us grievous psychological and bodily harm. We can thank our soldiers and sailors for being in the front line of that war — and for serving a worthy cause in supporting freedom and liberty.