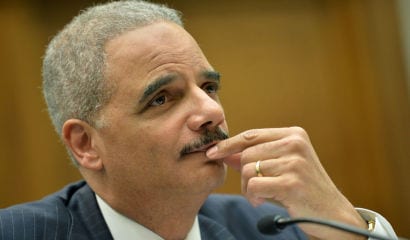 Holder’s Justice Department is so clearly awash in scandals that Justice doesn’t even bother to mount a defense. Justice did subpoena and examine Associated Press telephone records allegedly in pursuit of a leaker. It did execute a search warrant against Fox News reporter James Rosen (and his parents) gathering emails in an alleged investigation of another leaker. Both of those actions are an infringement on the First Amendment.

Holder is said to be losing his grip on the AG’s office because of this behavior and because of his apparent perjury in testimony to a House committee on May 15. But his luck may be holding because some of us were diverted last week by the “off the record” meeting he had with some media bigs.

Fox News, CNN, and the New York Times (among others) harrumphed an objection to the off the record nature of the meeting and didn’t attend. The Wall Street Journal and the Washington Post (again, among others) did.

After the meeting, Washington Post executive editor Martin Baron said, “We expressed our concerns that reporters felt some fear for doing their jobs, that they were concerned about using their email, using their office telephone and that we need to have freedom to do the job.”

Why the big fuss? The meeting — and others like it — are the result of Obama’s direction to Holder, made in his May 23 anti-anti-terrorist speech, to review the Justice Department’s guidelines for subpoenaing and executing search warrants for materials held by reporters. And it’s no surprise that WaPo sat, like a dutiful puppy, to learn how much of the First Amendment Eric Holder was willing to leave for them.

Most of us who have served in government — and pretty much all of us who are now journalists — have been to off the record meetings. In normal times, you go to learn something, not as supplicants to the government. And the effect of having a meeting off the record is not all that terrible. First, the “off the record” rule doesn’t entirely bar reporting on the meeting. All you have to do is maintain a bothersome audit trail to prove (to the government people who will be outraged at it) that your reporters gained the information about what was said and done at the meeting from other sources.

That, it being Washington, isn’t usually hard to do. People love to leak stuff.

Holder had his meeting and very little was reported about it. So what? About two weeks ago, Obama had a meeting with a group of devoutly liberal media bigs — including CBS News President David Rhodes — to get help from them on the three big scandals that are bogging down his administration: the Benghazi attack, the IRS targeting of conservative groups, and the Justice Department mess. David Rhodes is the brother of Ben Rhodes, Obama’s deputy national security advisor who had a major role in politically bowdlerizing the CIA talking points.

Nothing has been reported about that meeting. And why be surprised at that? This is what the liberal media do. They never leak what Obama — or Holder for that matter — tells them to keep quiet. They will protect Obama and Holder together because Obama is their guy and Holder is the personification of his agenda.

But the media’s ability to protect Holder is weakening. Can they protect Holder from the perjury charge? Probably, but only because the House Republicans are too feeble to push the matter sufficiently.

To review, there’s no dispute that Justice subpoenaed mountains of Associated Press telephone records. There’s also no dispute that they executed, in secret, a search warrant on Fox News reporter James Rosen that labeled him an “aider, abetter” and even a “co-conspirator” in violation of the Espionage Act. The warrant, which initial reports said also targeted Rosen’s parents’ phone records, left open whether the reporter would be brought up on charges. (The warrant reportedly alleged that Rosen had played to the ego and vanity of his source to get information. I’m shocked, shocked that a reporter would stoop so low.)

At the May 15 hearing, Holder did his best to echo his boss, mimicking the “I wasn’t there, I didn’t know, I’m just as outraged as you are” tactic Obama has employed every time he’s been caught. For once, it didn’t work.

By now we know that Holder wasn’t mimicking Obama, because Holder invented that evasion tactic. A few of us still remember the last-minute pardon that Bill Clinton bestowed on fugitive billionaire Marc Rich. With former White House counsel Jack Quinn, Eric Holder managed to maneuver the pardon application in the last days of the Clinton administration to ensure that the usual review process didn’t take place.

Which set up Holder’s invention of the “I wasn’t there” tactic Obama uses so often. A New York Times report from 2008 quotes Holder, speaking of the Marc Rich pardon and saying he “never devoted a great deal of time to this matter.” He said that, in hindsight, he wished that the Justice Department had been “more fully informed” about the Marc Rich pardon. Obama has adopted that as his universally applicable defense to scandal.

Regarding the Rosen search warrant, Holder obviously perjured himself. He said, “That is not something that I have ever been involved in, or would think would be a wise policy.” Sound familiar?

And now, of course, we know that Holder personally approved the Rosen search warrant. It’s also reported that Holder — or his underlings — went judge shopping for the search warrant. According to Breitbart, they had to go to three separate judges before they found one who would approve a “no notice” warrant that, as the label implies, would not be revealed to Fox News, Rosen, or his parents.

It’s not often that I disagree with Charles Krauthammer, but when he recently said that he couldn’t see how Holder survives these scandals, he was dead bang wrong.

The libs in the media, as I’ve said, will protect Holder because he’s the personification of Obama. And the more conservative media, like Fox News, won’t take Holder to court to prevent his infringement on the First Amendment because, as muddled as the law is on this issue, they might lose.

Last week, House Republicans wrote to Holder asking that he “clarify” his testimony. In Washingtonspeak, this is an invitation to paper over his perjury.

What the Republicans should have done was to demand a new appearance by Holder and grill him on his perjury. What they’re doing now is consistent with what they did last year when they held Holder in contempt of Congress for refusing to provide information about the administration’s performance in the “Fast and Furious” gun-walking scandal. That happened a year ago, and the matter has disappeared into the court system where the Republicans are content to let Obama’s claim of executive privilege languish.

The other reason Holder will likely escape the latest scandals is that people don’t think much about freedom of the press. The bridge between news and entertainment was crossed so long ago it’s hard to remember which is which. And, more importantly, people don’t trust the press. In September of last year, Gallup released a poll that said 60% of Americans have little or no faith in the mass media. If Holder is abusing the constitutional rights of the press — and he is — who will bother to stand against him?

When he was governor of Louisiana, someone asked Fast Eddie Edwards what it would take to remove him from office. Ever the truthsayer, Edwards replied that the only way he’d be thrown out was if he were “caught in bed with a live boy or a dead woman.” I’m not sure that even such an event would rid us of Eric Holder.