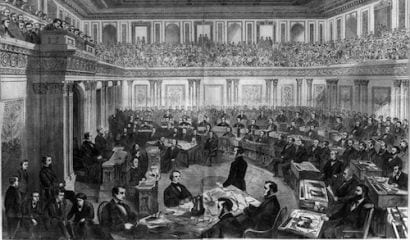 If ours were a parliamentary democracy like Great Britain, Barack Obama might be on his way out — or already gone. They have something called a vote of no confidence, which provides a quick and easy means of jettisoning a prime minister who has become hopelessly bewildered in the task of governing, or who has made such a mess of things that an early change of government seems necessary.

By a simple majority vote on a motion of no confidence, British members of Parliament can remove a sitting prime minister at any time, and they have done so on eleven occasions over the past 231 years. Benjamin Disraeli and William Gladstone are among those who have been summarily bounced out of office in this way.

Going back almost as many years (224), no U.S. president has ever been evicted from office through the impeachment process — which is not at all the same thing as a vote of no confidence, but which is the only Constitutional mechanism for forcible removal of a U.S. president before the end of his term. However, one president — Richard M. Nixon — resigned in the face of almost certain impeachment, conviction, and removal from office.

President Obama can thank the founding fathers for affording him (and other presidents before him) the means of riding out anything less than a perfect storm of misdeeds, mismanagement, and disgrace, combined with public outrage on a massive scale.

At the Constitutional Convention in 1787, the delegates devised a system that makes impeachment and removal from office a two-step process. First, a majority in the House of Representatives must vote to bring formal charges of unlawful conduct (the “articles of impeachment”) before the Senate. Second, fully two-thirds of Senators must vote to convict — finding the president guilty as charged — in order to trigger his removal from office.

Early on, the delegates favored mere “mal-practice and neglect of duty” as grounds for impeachment, but they later narrowed that to “Treason, Bribery, or other high Crimes and Misdemeanors.”

The identity of the first British prime minister to fall from office as a result of a no-confidence vote was well known to the delegates meeting in Philadelphia. He was their longtime enemy — Frederick North, better known by his courtesy title Lord North, Britain’s PM throughout the American Revolutionary War as well as during the five-year period preceding it. North presided over one of the greatest defeats in British history — losing to the ragtag army that fought under George Washington. That led to his undoing through a vote of no confidence.

The Labour Party’s James Callaghan was the most recent British prime minister to be toppled by a vote of no confidence. His downfall came toward the end of Britain’s infamous 1978/79 “Winter of Discontent,” when widespread strikes and industrial disputes caused trains to stop running, refuse to pile up the streets, the seriously ill to go untreated, and the dead to go unburied.

Callaghan resigned on March 28, 1979, and was soundly defeated by the Conservative Margaret Thatcher in the ensuing general election, held just five weeks later on May 3, 1979. She moved into 10 Downing Street the next day.

Apart from the sense of having lost the confidence of the governed, there is nothing intrinsically shameful about being thrown out of government on a vote of no confidence. Both North and Callaghan were good-humored in defeat.

North surprised his parliamentary opponents by not contesting the motion that led to his dismissal. Expecting a long debate, his opponents had sent their carriages away and were forced to wait in the rain outside Parliament while a smiling North had his waiting. “Good night, gentlemen,” he told them. “You see what it is to be on the secret.” For his part, Callaghan cheerfully agreed that the British people probably needed a change.

In contrast, impeachment proceedings in the U.S. could hardly be anything other than grim. They involve charges of unlawful conduct and are aimed at punishment (including disbarment from further office and loss of any possible federal pensions) as well removal from office.

Andrew Johnson, who as vice president succeeded to the presidency following Abraham Lincoln’s assassination in 1865, clashed with the radical Republicans who controlled Congress and who were infuriated by the Tennessean’s hostility (Tennessee was the last state to secede and the first to rejoin the Union after the war) to their plans to protect the newly freed slaves in the South. Johnson was impeached for his refusal to obey a law (passed over his veto but possibly unconstitutional) that prohibited the firing of a Cabinet official without congressional approval. He was charged with “contempt of Congress.”

Following his impeachment (i.e., indictment) by a majority vote in the House, Johnson’s trial in the Senate dragged on for eleven weeks. His opponents came one vote short (35-19) of gaining the two-thirds supermajority needed for conviction and removal from office.

More than a hundred years later, Nixon, a Republican, was on the verge of impeachment after the House Judiciary Committee approved articles of impeachment against him on charges of concealing evidence that connected the White House to the burglary of the Democratic Party’s offices at the Watergate apartment complex prior to the 1972 general election. Nixon resigned on August 9, 1974, and was subsequently pardoned by President Gerald Ford.

Even after the Senate Watergate Committee had conducted its nationally televised hearings in the spring of 1973, an overwhelming majority of Americans remained opposed to Nixon’s impeachment and removal from office. It was only at very end of year that support for the president began to show significant slippage. In a Harris poll in July 1973, 70 percent of people said that Nixon should not be forced from office, versus 19 percent who said he should. A year later, those numbers had flipped — with 53 percent saying he should be forced out, versus only 34 percent saying he should not.

What happened in the space of a year to cause the precipitous drop in Nixon’s personal popularity?

Well, one thing, clearly, which had nothing to do with Watergate, was the onset of a severe recession and stock market collapse, set off by the Arab oil embargo in October of 1973.

A second factor was the relentless pounding that the weakened president took on a daily basis in the news media. The Watergate scandal elevated the Washington Post’s Bob Woodward and Carl Bernstein into national heroes — in the minds of most journalists and the Hollywood and academic glitterati.

They say you never forget your first love: and make no mistake about it, Watergate was the first and most endearing love the American media ever had. And they played it to the hilt, using all the propaganda arms at their disposal, even making Nixon a veritable cinema monster; with any number of mumbling, unshaven actors interpreting the former president as a psychotic fiend, with the mere mention of Watergate sure to evoke menacing movie music.

Caught in an obvious lie in denying a sexual relationship with Monica Lewinsky, the 24-year-old White House intern, and beset with other scandals, Bill Clinton was the only other president to be seriously threatened with removal from office under articles of impeachment. He was impeached in the House and acquitted in the Senate on a pair of charges: perjury and obstruction of justice. The first charge was defeated with 55 “not guilty” votes and 45 “guilty” votes, while the second led to an even 50-50 split. In both cases, that was well short of the 67 “guilty” votes required for conviction.

In sharp contrast to Nixon, Clinton benefited from a strong economy and a rising stock market. And unlike Nixon, he remained a popular figure — not just with the press but the country at large. His approval ratings actually rose in the months leading up to his impeachment — even though only 37 percent of people polled called Clinton “a leader you can trust.”

So what about Obama — who oh-so-clearly went out of his way to mislead the country on the true nature of the attack on the consulate in Benghazi on the night of September 11/12, 2012, and who is also enmeshed in other scandals involving the IRS targeting of conservative groups and of the Justice Department’s abuse of the First Amendment right of freedom of the press.

Republican heavyweights who are as far apart in their thinking as Rush Limbaugh and Karl Rove agree that it would crazy at this point to even talk about impeachment. Limbaugh maintains that the American people as a whole would be adamantly opposed to the forced removal of the first black president. Rove fears the party would be committing political hari-kari in making a public threat of impeachment. Rove can remember that the Republicans fared badly in the mid-term elections of 1998 in the lead-up to Clinton’s impeachment.

Obama has slipped a bit in personal popularity but is still nowhere close to the negative territory that caused Nixon to resign. And he is not about to lose the loyal and unquestioning support of the New York Times and other parts of the mainstream press.

Yes, he has lied to the public in what he said — or had others say — about Benghazi, but then, too, Bill Clinton famously said, “I did not have sexual relations with that woman, Miss Lewinsky.”

Lying in itself — while not under oath — is not an impeachable offense. And Obama continues to lead a charmed existence — despite multiple failures in domestic and foreign policy and abundant evidence of all-politics-all-the-time deceitfulness in many avenues of government.

That is not beyond the realm of possibility. But it would require further major surprises and revelations — including not just hard evidence of criminal wrongdoing, but a shift in public opinion holding him to blame for failing to tell the truth or act responsibly.

Impeachment is a big and seldom-used stick. But it may still come into play in this presidency.