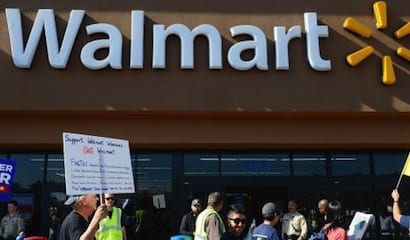 Last week, the Democratic staff of the House Committee on Education and the Workforce released a report purporting to show that low wages for Walmart employees hurts taxpayers and economic growth.

It is a follow-up to a 2004 paper by the Walmart-obsessed Rep. George Miller (D-CA), himself a wholly-owned subsidiary of big labor (unions represent 19 of his top 20 campaign contributors), entitled “Everyday Low Wages: The Hidden Price We All Pay For Wal-Mart.” (In 2009, Walmart officially removed the hyphen from its name.)

The new report, like the original, is full of economic nonsense and confusion, and so much union-fueled anger against the nation’s largest retailer and private-sector employer that it is bound to be accepted widely among Democrats and the “mainstream” media.

Indeed a Huffington Post article about the report gathered more than 32,000 Facebook “likes” and almost 13,000 “shares” along with nearly 1,700 “Tweets” and almost 22,000 comments in its first 72 hours online. Confirmation bias abounds, though there are many skeptics among the commenters.

In short, the Democrats’ report says that Walmart pays low wages and offers few benefits because, to the left’s dismay, of “aggressive avoidance of collective bargaining with its employees,” which is the true focus of Rep. Miller’s anger and frustration.

The report argues that a single store, a Walmart Supercenter in Wisconsin, “likely costs taxpayers at least $904,542 per year and could cost taxpayers up to $1,744.590 per year — about $5,815 per employee” (emphasis in original).

In a 1998 magazine article (later included in a 2008 book), a well-known economist argued this about “living wage” laws, including raising wages through collective bargaining: “So what are the effects of increasing minimum wages? Any Econ 101 student can tell you the answer: The higher wage reduces the quantity of labor demanded, and hence leads to unemployment.”

The economist goes on to argue that the most well-known study which argues that increased minimum wage rates do not hurt employment contains “wishful thinking of the first order,” a “fundamental flaw,” an “odd oversight,” and “much that is silly.”

And he concludes with one of the best paragraphs I’ve ever read about debate over higher minimum wages:

In short, what the living wage is really about is not living standards, or even economics, but morality. Its advocates are basically opposed to the idea that wages are a market price — determined by supply and demand, the same as the price of apples or coal. And it is for that reason, rather than the practical details, that the broader political movement of which the demand for a living wage is the leading edge is ultimately doomed to failure: For the amorality of the market economy is part of its essence, and cannot be legislated away.

You may be thinking that this hopeful prediction of liberal failure came from the Heritage Foundation or the Cato Institute or a former Reagan appointee, but the author was in fact Paul Krugman, now a famously leftist columnist for the New York Times, who is lately trying to thread the needle of his past sensible discussion with his current desire to support all things Obama and union. (Sadly, the predicted political failure of those whose economic policy suggestions are the equivalent of clicking their heels together and saying “there’s no job like a union job” is not as obvious as it should be.)

The Democrats’ report repeats claims of middle class wage stagnation, forgetting how much the value of health care and retirement has increased, and how the average masks the fact that many women and immigrants have entered the work force in lower-skill and lower-pay jobs in recent decades.

They sprinkle in the left’s usual class warfare barbs and anger that the Walton family (the children of the company’s founder and the largest shareholders in Walmart) has increased in wealth in the past several years, then go on to castigate Walmart for “alleged retaliation,” “vague scheduling,” and other unproven and hard-to-define malfeasance.

Eventually Miller and friends get to their supposed economic point: By assuming certain levels of participation in Wisconsin’s Medicaid program and “other taxpayer-funded programs” such as reduced-price school meals, housing assistance, the Earned Income Tax Credit, energy assistance, and food stamps, the report concludes that Walmart’s employment policies cost taxpayers a few thousand dollars per employee and over $900,000 per 300-employee store annually.

Even separate from the fundamental misunderstanding of the repercussions of higher minimum wages, including reduced employment prospects for our least-skilled and youngest workers, with particular negative impact on minority communities, Rep. Miller’s report has several other fatal flaws.

First, complaining about Walmart employees getting taxpayer funded benefits misses the key point that if government were not so generous doling out other people’s money, Walmart would have to pay its employees more. It is the existence of overly generous public benefits that allows Walmart and others to behave as if the government is contributing to its employees’ total compensation. The best way to force Walmart to pay more is to reduce or eliminate many of the programs noted above.

Second, nowhere does the report note the obvious fact that Walmart’s employees are not slaves; they are working there of their own choice. If they had better opportunities elsewhere, one can assume they would avail themselves of those opportunities. Since we have by definition ruled out that they can get higher-paying jobs elsewhere (or more desirable jobs based on the totality of the jobs’ characteristics beyond just wages), it is likely that most Walmart employees are grateful to have the work they have.

That is particularly true in an economy where Democrats’ regulations and laws (especially Obamacare) are, as investment bank UBS put it, causing a “Great Suppression” of private sector hiring.

It is no wonder that a union-backed group of Walmart employee gadflies has not been able to muster more than about 100 workers to strike in protest of their employment conditions — out of approximately 1.5 million employees across the nation.

Third, and most obvious, is the question of how much it would cost taxpayers if Walmart were not there to offer jobs to more than a million relatively low-skilled workers.

Fourth, the report never mentions the remarkable disinflationary impact of Walmart, and how this one company is probably the most effective anti-poverty program since the industrial revolution.

A 2005 Global Insight study on the impact of Walmart on consumer prices found:

[T]he expansion of Wal-Mart over the 1985-2004 period can be associated with a cumulative decline of 9.1% in food-at-home prices, a 4.2% decline in commodities (goods) prices, and a 3.1% decline in overall consumer prices as measured by the Consumer Price Index…(which) corresponds to a 0.1-0.2% reduction in the annual inflation rate over this period….The reduction in the price level due to the presence of Wal-Mart translates directly into savings for consumers amounting to $263 billion by 2004, which amounts to $895 per person and $2,329 per household.

But why should consumers, especially low-income consumers, pay more for products they buy every day so that George Miller can increase his campaign contributions from unions?

And as usual, champions of a leviathan state don’t even consider the question of why government interference into a private employer-employee agreement is acceptable in a free country.

Fortunately, unlike many spineless CEOs in America whose desire to get along, or whose interest in cronyism and rent-seeking, causes them to play the Washington games and look for a “compromise,” Walmart is nobody’s pushover. In 2005, workers at a Walmart in Quebec voted to unionize. Within hours of being told that it would be forced into arbitration, Walmart announced the closing of the store.

Democrats may see Walmart as a bully or an exploiter. Walmart responds that their employees love their jobs and that the company “has their backs.” What any given person believes will be more subjective than based on particular facts.

But there is one fact that would seem to trump all others: In a free society, where people can choose among their available options whatever they believe is best for themselves and their families, Walmart has more employees than any other company — no thanks to unions or Democrats.

That is what George Miller is really angry about.