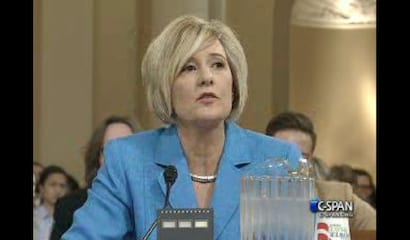 The IRS has called its targeting of conservative groups “horrible customer service”—a cold and trivializing apology befitting a federal government that sees itself as a corporate Leviathan. Officials who understood that they serve a government of, by, and for the people would never speak in such odd terms. What happened was not poor customer service but tyranny.

Appearing on Capitol Hill Tuesday, Becky Gerritson of Alabama’s Wetumpka Tea Party, along with other targets of the IRS, gave the federal government a well-deserved shafting along those lines. Gerritson effectively put her finger on the central issue underpinning the scandal:

In Wetumpka, we are patriotic Americans; we peacefully assemble; we petition our government; we exercise our right to free speech. We don’t understand why the government tried to stop us. I’m not here as a serf or a vassal. I’m not begging my lord for mercy. I’m a born-free American woman, wife, mother, and citizen, and I’m telling my government that you’ve forgotten your place.

“I’m not interested in scoring political points,” she added. “I want to preserve and protect the America that I grew up in. The America that people crossed oceans and risked their lives to become a part of, and I’m terrified it’s slipping away.”

Others at the hearing testified to the perversity of the IRS’s abuse: absurd delays, outrageous and intrusive questions, imperious demands.

Sue Martinek of the Coalition for Life of Iowa said that her group was asked to furnish the IRS with the “contents” of its prayers.  Under Obama’s government-as-God model, such questions apparently become thinkable. She also said that an IRS agent wanted an assurance from her that the group wouldn’t be picketing outside of any Planned Parenthood clinics.

John Eastman, chairman of the National Organization for Marriage, said that the IRS leaked confidential information about his donors to gay activists with ties to Obama.  Kevin Kookogey, the founder of Linchpins of Liberty (which hasn’t received tax-exempt status yet), said that he was told to detail his political views and associations.

In one form or another, members of the groups were all asked: Are you now or have you ever been a conservative?

Naturally, Obama is working hard to make sure that the scandal is framed in terms of isolated, individualistic error. But it goes beyond a handful of IRS employees. It goes at the very least to the bad judgment of his appointees (who have known about it since 2011) and to the tone his ideological biases set in government agencies.  His repeated denunciations of the tea party as extremist, his view of “campaign finance reform” as a justification for inhibiting political speech, and his hyper-statist conception of taxation (where the burden always falls on the taxpayer, not the government) all ripened the IRS up for his kind of scandal. Indeed, much of his rhetoric turns on the contention that conservatism is “political” while liberalism embodies “social welfare.” Double standards at the IRS surely fed off that bogus contrast.

Such a raw abuse of power won’t happen again, vows Obama. Anyone who believes that should pay attention to Democratic Congressman Jim McDermott’s remarks at Tuesday’s hearing. “None of your organizations were kept from organizing or silenced. We’re talking about whether or not the American taxpayers will subsidize your work. We’re talking about a tax break,” McDermott told the witnesses. “Without oversight, a status meant for charity becomes a machine for political money laundering.” He added that “each of your groups are highly political.”

Obama can’t afford politically to agree with McDermott at the moment, but he shares that sentiment. Left to his own devices, Obama would vaporize these groups in the name of campaign finance reform. He also holds the same perverse view of a public subsidy, which is defined not by giving these groups money but by allowing them the high honor of keeping their own. Under such warped thinking it becomes possible to force groups into contortions in order to prove their worthiness for a “public benefit.”

It is the unlimited conception of the federal government built into this arrangement that Gerritson was decrying. Under the Constitution, the people are masters, not servants. But under the anti-Constitution of liberalism, the people are servants, not masters, or at best hapless customers of a monopoly that gives “horrible customer service” from time to time while still holding a contract on their freedom.