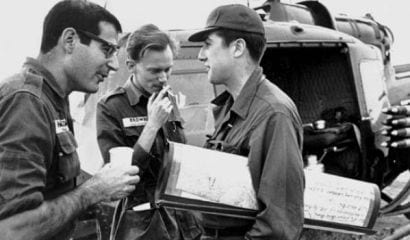 The Vietnam War destroyed many traditions that had existed since World War II: one was the important relationship between most journalists and the U.S. Government. There had been a tacit accord that American correspondents would not divulge – or even seek to divulge – classified or sensitive information. Favored journalists, however, were sometimes leaked early notice of important developments and the “inside” story of what really was happening that had publicly appeared quite differently.

David Halberstam of the New York Times was one of the first who decided to break the “rules.” Among other stories he published were sensitive matters concerning anti-Bhuddist activity by President Diem’s brother Ngo Dinh Nhu. At least that was one of the claims made by U.S. Embassy sources. In fact Dave had previously served in the Congo where he tended to stray from the official U.S. line, but never made public the information he picked up from his close personal relationship with the American Embassy. It was all a matter of convenience and well under control. It was well known that 26-year-old Halberstam had good contacts within the Kennedy political family. Just as importantly, Halberstam in those early days never drifted into the covert area of activities in Leopoldville.

Earlier in the Congo, just after independence, information was a two-way street. Frank Carlucci, who was to rise to the highest levels in the next decade, was then a young State Department political officer in the Leopoldville embassy. He spent his early evenings at the Hotel Memling bar arming journalists (mostly American, some British) with his take on the player roster of the latest Congolese politicians. In turn the journalists would share their collected bits to flesh out Carlucci’s scorecard. The French correspondents, for the most part, shared very little; that was left over from WWII. The Russian representative of TASS, the redoubtable Fedyashin of the KGB, was not unknown to drop a gem or two if it was to his advantage.

Frank Kearns, of CBS, explained the dance as “a bit like hookers sharing secrets of their clients’ predilections. You can’t believe everything, but it’s handy to know.” But then Frank was particularly cynical. He could afford to be because he had had a “special relationship” with the American military going back to his days covering SHAEF in London during the “big one.” Welles Hangen of NBC got into trouble with his fellow correspondents because they thought he was stealing stories from them. As getting a jump on the competition was always part of the job, and Welles was always one of the smartest of the crowd, there wasn’t any reason for him to steal anything. He was captured and killed by the Khmer Rouge in Cambodia ten years later. He was ahead of that story, too.

The entire collegial system broke down in ‘Nam because the U.S. command actually pushed disinformation (“snow’) through both witting and unwitting American journalists. Vietnamese official sources were getting rich funneling “news” to all foreign journalists. After a while playing favorites became the preferred mode of U.S. official communication. Jealousy grew both on the side of the journalists and the political/propaganda officers. Major Colin Powell, who at the time was the Asst. Chief of Staff (Operations) for the Americal Division – and effectively the division’s public affairs officer – reportedly said to Donald Wise of London’s Daily Mirror that doing that part of his job was “ like providing public relations for cancer.”

When the war ended and Nixon had succeeded in destroying any good will left among the press, public, and his own party, the working relationship between the press and U.S. security, defense, and diplomatic entities drifted into strictly individual connections. The Pentagon and Langley were available to a select few, and Foggy Bottom continued to well earn its name. Once the U.S. returned to some shooting wars starting with Desert Storm and following through to Bosnia, a new generation of journalists took over and the American military and diplomatic sources returned to traditional “sharing ways.” The main names of the period all had solid Washington credentials on both the journalism and political/military sides. Afghanistan and Iraq spawned a return to a proliferation of sources of all kinds. Indigenous sources were useful when they spoke English or French – not unlike Saigon.

As the American presence in Baghdad ended and Afghanistan became a dying story, the journalistic scene turned into domestic combat. Journalists had come to think of themselves –and were treated generally – as a privileged class. Covert affairs were not classified beyond public reach, but simply considered an impediment to the American media getting to know about it — except, of course, when it was personally or politically advantageous. For the press it was no longer a privilege to know things, but their right. The First Amendment had been translated into the American media believing it was the Inspector General of all things governmental. The White House didn’t mind that concept as the main elements of the press had become virtually wholly owned subsidiaries of the ruling party and its adored leader, Barack Obama.

By this definition the ownership of classified information passed from the American public to the American media. And U.S. officialdom exploited this new concept to its advantage at every turn — unless it tended to bite them. And that’s where we are today, with an IRS turned into a partisan policing agency and an Attorney General acting as the presidential consigliere, apologist, and all-around fixer. After the Benghazi debacle the U.S. military and security establishments haven’t a clue as to what they should be doing.

Finally, the press has begun to notice the dangers of the changes and shows signs of yearning for a return to its constitutional role of reporting and commentating. Journalists never did want the responsibility of governing.