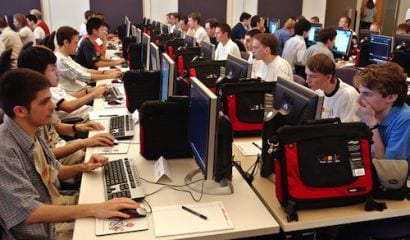 One of the selling points for comprehensive immigration reform is the claimed benefits of granting a special kind of green card to all foreign students earning advanced degrees in science, technology, engineering, and math (STEM). This argument is being made by corporate leaders, including those from the high-tech sector, who argue that it is a smart economic move for the nation.

In the latest issue of Barron’s, Norm Matloff, a professor of computer science at the University of California at Davis, offers a serious critique of the proposal presently working its way through the U.S. Senate.

Matloff argues that the so-called H-1B work visa and employer sponsored green-card programs “are bringing in workers who tend to be of lesser talent than their American peers. Worse, they are indirectly displacing Americans.”

“The result,” says Matloff, “is a net reduction in the country’s talent level.” Yet, the tech industry wants to expand immigration for their benefit, claiming they simply want to bring in the “best and the brightest” and maintain America’s competitive advantage. Indeed, Matloff dismisses this argument, citing data that “show that most of the foreign tech workers are ordinary folks doing ordinary work.”

In one of his studies, published in a peer-reviewed journal, Migration Letters, Matloff compared native (yes, the word grates, at least for this Irish-American) U.S. engineers with immigrant engineers who first came here as students. “In computer science, the natives, on average, had a significantly higher patenting rate than immigrants of the same age, education, and so on,” says Matloff. “The rate for U.S. natives with only bachelor’s degrees was as high as the rate for immigrants at the master’s degree level.”

Also, 30-year-old natives with master’s degrees are 68 percent more likely to work in research and development (R&D) than foreign students of the same age and education. Matloff claims that, at the doctoral level, foreign students “tend to earn their degrees at institutions of somewhat lesser selectivity and research prominence, again, compared to native-born students.

Matloff cites a U.S. News and World report rating, using a scale of 1 to 5, demonstrating that the mean program rating for Americans is 3.71 versus 3.44 for those who are foreign-born. Similar findings were made in a study by the National Bureau of Economic Research which noted, “Among students from China, Taiwan, and South Korea, growth has been particularly concentrated outside the most highly ranked institutions.”

All of this seems a bit counter-intuitive. I work with many technical people from India and China on water and wastewater issues in my day job. They seem to be thriving in those areas, but Matloff offers data to back up his claim that many immigrant engineers are not necessarily contributing to high-end innovation, invention, and new start-ups. As I said, these are questions that need to be investigated.

According to Dr. Matloff, the Immigration Act of 1990 instituted the H-1B to replace the old H-1 visa, titled “Aliens of Distinguished Merit and Ability.”

“Inexplicably, the immigration bill currently under consideration by the Senate would further the trend away from quality,” says Matloff. “The proposal would, in essence, grant special green cards to all foreign students earning advanced degrees in science, technology, engineering and math (STEM for short) at U.S. schools-regardless of quality.” There would be no accounting for mediocre grades, say, at an undistinguished school.

Matloff believes that the H-1B visa program “reduces wages, making STEM careers unattractive to American students” as was anticipated by a 1989 internal National Science Foundation report. Matloff also notes that a “2007 Urban Institute study found that we are producing far more STEM graduates at the bachelor’s level than the economy needs, but that too few get advanced degrees.”

For Matloff the bottom line is that Congress “should grant a green card to any foreign STEM worker who has a legitimate U.S. offer at or above the 90th percentile of pay in that job. The loopholes that allow employers to import cut-rate workers should be plugged, so that companies can’t use H-1B visas to get underpaid workers.”

Now a libertarian would argue that an open border, or something like it, is the ideal. Government should have nothing to say about labor markets even across national boundaries. Most corporate leaders seem to be taking a more utilitarian position seeing a positive benefit-cost ratio in cheaper engineering talent, even at the cost of innovation. Or they would simply dispute Dr. Matloff’s study and data. I am not sure on this latter point. And an egalitarian would get nervous privileging elite foreign STEM workers.

But most Americans believe a sovereign nation should have some say in who can cross its borders and under what conditions. The same goes for conferring citizenship. So seeing to the employment of engineers who are already citizens would seem to be a reasonable concern. But, again, I cannot vouch for Matloff’s data. He does, however, pose serious questions.

I probably wouldn’t have read Matloff’s opinion piece, or written this post, but for the fact I recently saw an article by Joel Kotkin, an iconoclastic geographer who also writes for Forbes from time to time. In a lengthy post at the Daily Beast, he argued that America’s love for the tech executives is hardly mutual. They hire few workers compared to manufacturing, export most jobs, pay few taxes (Apple!), and game immigration reform. He even noted how Steve Jobs never really engaged in much philanthropy. All in all, it was quite a blast at tech oligarchs, similar to those that some conservatives are starting to direct toward Wall Street bankers and “too big to fail.”

Kotkin is Democrat who usually drives social theorists, New Urbanists, and other sophisticates nuts because he see the real growth in America as being in the Sunbelt and suburbs. He is more of a blue-collar intellectual who is always going after the “thought leaders” in the commanding heights of our culture.

I normally steer clear of populists, but American society is, more and more, becoming a polarized land with the very rich, a growing underclass, and shrinking middle class drifting farther and farther apart from one another — socially, culturally, geographically. The Fed has made it impossible for small savers and retirees to accumulate wealth, given the less-than-nothing interest rates. Governments at all levels are taxing and regulating the animal spirits out of small business, resulting in a fall off in the creation of new enterprises. Real income is falling. Even George Will is calling for the break-up of the big banks.

Congress to needs to study Dr. Matloff’s claims and decide what is, truly, in the best interest of the nation’s engineering profession and other STEM workers.