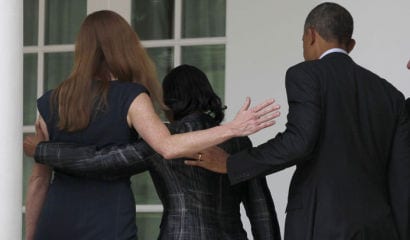 It seemed as if we’d be able to focus on the Eric Holder subset of the Obama scandal parade for at least a few days. But we were interrupted by revelations about Obama’s telephone and email snooping published in the Guardian, a Brit newspaper not known for its faithfulness to the facts.

Guardian published a story — and a top secret court order from the Foreign Intelligence Surveillance Court — focusing on our government’s intelligence gathering of telephone “metadata” on more than a hundred million Verizon customers and a hitherto unknown e-mail snooping system called “PRISM.” Both reports were verified (and denounced) by the U.S. intelligence community.

These reports come at a time when the Obama scandal score card read:

And that’s only the top five on the list.

Libertarians, and some conservatives, are shouting that we’re undergoing a quiet coup d’état, a revolution against our Constitution that is happening under our noses. It may get that far, but we’re not there yet. What is happening is not a revolution but rather the realization that we cannot believe anything that this administration says.

Back to the case in point.

In a March 12 hearing of the Senate Select Committee on Intelligence, Director of National Intelligence James Clapper was asked, “Does the NSA collect any type of data at all on millions or hundreds of millions of Americans?”

To which he answered, “No, sir.” His questioner followed up. “It does not?” Clapper said, “Not wittingly. There are cases where they could inadvertently, perhaps, collect, but not wittingly.”

There’s an unwritten rule in the military and the intelligence community that it’s perfectly honorable to lie when you do so to protect the nation’s secrets. But that rule doesn’t apply to congressional testimony. Clapper should have said he’d answer that for the record, or employed some such evasion. But he didn’t and his falsehood was revealed by the Guardian on Wednesday when it published a top secret order from the Foreign Intelligence Surveillance Court. The order compels the Verizon company to provide the National Security Agency with “metadata” — data such as telephone numbers, routing information but not the content of the conversations — on its more than 100 million customers in America.

(These orders are renewed periodically and affect most if not all other telephone companies.)

Telephone metadata disclosure to the government, per se, is not an assault on our personal freedoms. But to demand, and obtain, a court order affecting the telephone data of more than 100 million Americans — as the Verizon order does — makes no sense.

The government, if it is going to effectively stop terrorist attacks in the United States, has to be able to focus its intelligence gathering a lot better than that. Moreover, there is an unexplored — and possibly boundless — potential for abuse in such overwhelming data gathering. There is nothing to tell us why we should trust the government with these data.

The “PRISM” program may be better or worse. From what we can piece together from a slew of media reports, it appears to be better than the telephone metadata gathering. But is it?

“PRISM” is not a single system but a series of technologies applied to some nine Internet companies including Skype, Google, Facebook, and Apple. These technologies allow the NSA to target specific “signal intelligence addresses” — IP address, email name, Facebook page or what have you — for intelligence extraction. In fact, it probably does so by groups or by classes because of the sheer number of sources to be targeted.

The best thing about the PRISM system is that its functions are overseen by the FISA court. FISA’s built-in protections for U.S. citizens require the disclosure to the Court of any intelligence gathering on them and requires that the wrongfully gathered information be destroyed promptly. We know from one report that Attorney General Holder has had to disclose one such improper targeting of a U.S. citizen to the Court and destroy the information. (The same report indicates that there have been other mistakes in intelligence gathering.)

So why all the fuss about PRISM? With the FISA court overseeing intelligence gathering, there should be no prospect of abuse. But two facts make PRISM troubling.

First, there were reportedly over 1,800 FISA court orders last year authorizing a variety of intelligence gathering. I would not say that the court should start denying these orders, but we have to ask: if judges are going to authorize a blanket order such as the Verizon order, are they requiring enough information from the FBI and NSA to really justify them?

Second, according to news reports, we are sharing the intelligence PRISM gathers with foreign intelligence agencies including Britain’s GCHQ, its equivalent of NSA. That’s very good because, as it usually works, we would be receiving equally valuable anti-terrorist intel from them and benefiting from it. But what other governments are getting that information? Even within NATO, none should. Mr. Obama has a lot of “friends” among other nations’ leaders who aren’t at all worthy of that trust.

And, unfortunately, neither is he. Mr. Obama assured us on Friday that nobody is listening to our phone calls, that federal judges were overseeing these intelligence collection operations, and that they were only a “modest encroachment on privacy.” In truth, it probably doesn’t even rise to that level of importance. But he has no credibility left to tell us.

Obama’s trust gap is too wide. He’s smiling and saying “trust me.” Why should we? Richard Nixon only mused about siccing the IRS on his enemies. Obama has done it. His attorney general routinely lies to us and to Congress. It’s his cabinet members — and subcabinet officials — who use phony emails to hide official business from Congress and the press. And so on.

The well of trust every president has when he’s elected has run dry for Obama. There might have been a time when Obama could have been worthy of our trust, but he forfeited it so long ago nobody can even remember when it happened.