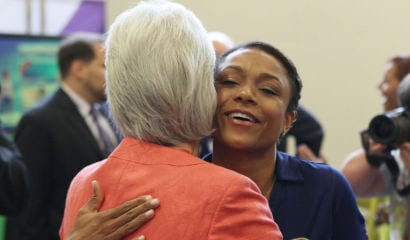 Ever wonder what Kathleen Sebelius does when she isn’t sentencing children to death, shaking down health care providers, or violating campaign finance laws? Well, it seems she spends her spare time, and a lot of taxpayer money, dabbling in illegal lobbying. The Anti-Lobbying Act forbids federal bureaucrats from using money appropriated by Congress to influence “an official of any government, to favor, adopt, or oppose… any legislation, law, ratification, policy, or appropriation.” Sebelius evidently didn’t get the memo.

Specifically, it looks like Madam Commissar and her HHS minions have been using federal money to lobby state and local officials to “favor, adopt or oppose” countless initiatives involving everything from local zoning rules to ordinances concerning tobacco use to the imposition of new taxes on soft drinks. The cash they are thus spreading around comes from an obscure Obamacare trove called the “Prevention and Public Health Fund,” which provides Sebelius with what amounts to $12.5 billion in pin money.

For any reader too young to recognize the term “pin money,” this refers to a regular allowance your grandfather might have given to your grandmother for various incidental household purchases that she wasn’t expected to report to him or account for later. And this, despite the truly gigantic amounts of money involved, is pretty much how the “Prevention and Public Health Fund” works. As Stuart Taylor reports in Forbes, “[HHS] can spend the money as it sees fit and without going through the congressional appropriations process.”

And if you have become so jaded by the government’s fiscal profligacy that you’re not impressed by the $12.5 billion figure, consider that this is only for the first decade. After that money is gone, this fund will be replenished to the tune of $2 billion per year — forever. Yes, forever. The statute doesn’t actually say “as long as the wind blows and the grass grows,” but it does clearly stipulate that the fund never expires. Yet, as the law is written, HHS doesn’t have to account for its outlays in any meaningful way.

Now, if this combination of huge sums of money and unaccountable bureaucrats makes you a little uneasy, you are right to worry. HHS has disposed of this money in ways that will be familiar to anyone following the IRS scandals. The HHS has, for example, financed programs reminiscent of the infamous Cupid Shuffle. Taylor goes on to point out that grant money is already being dispersed for “anything from ‘pickleball’ (a racquet sport) in Carteret County, N.C. to Zumba (a dance fitness program), kayaking and kickboxing in Waco, TX.”

As absurd and wasteful as such programs are, particularly when financed by a federal government that adds trillions to the national debt every year, they are the least disturbing feature of this fund. The thing that should worry anyone who believes in limited government is that a lot of money from this program has been used specifically for the kind of lobbying forbidden by federal law, brazenly flouting statutes designed to prevent politicians from using taxpayer money to promote projects that taxpayers don’t support.

Nonetheless, that kind of activity is precisely what HHS is doling out most of the money for. Walter Olson provides some examples at the Cato blog: “A $7 million grant to activists in the St. Louis area went in part toward lobbying for the repeal of a state law barring municipal tobacco taxes.” Olson goes on to quote a report by the Pennsylvania Department of Health on how its $1.5 million grant was used: “‘210 policy makers were contacted … 31 ordinances were passed … there were 26 community presentations made to local governments.’”

These examples, along with others cited by Taylor and Olson, are obviously the result of federal tax dollars being used to influence state and local officials “to favor, adopt, or oppose” legislation. It will come as no surprise, however, that the establishment “news” media have been as silent as the tomb on the issue. A few Republican lawmakers have pressed HHS on it, including Rep. Fred Upton of the House Energy & Commerce Committee and Darrell Issa of the House Oversight and Government Reform Committee.

Pursuant to Obama administration policy, however, inquiries from Upton, Issa, and others on Capitol Hill have been largely ignored. Likewise, Sebelius and her minions have paid little heed to the concerns raised by her department’s own Inspector General. HHS Inspector General Daniel Levinson raised concerns a year ago about some grants, warning Sebelius that they may violate anti-lobbying statutes. The response was a general assurance that her department was taking care to remain in compliance with all such laws.

This is nonsense, of course. Sebelius is no more worried about the Anti-Lobbying Act than she is about the Hatch Act. Like every other high-ranking member of the Obama administration, she believes she is above the law. And the objective evidence suggests that she’s right. She has made an enormous number of ethically dubious decisions during her tenure at HHS and violated the law on several occasions. Yet, she remains secure in one of the most powerful positions in our government. What’s one more crime, more or less, to Madam Commissar?