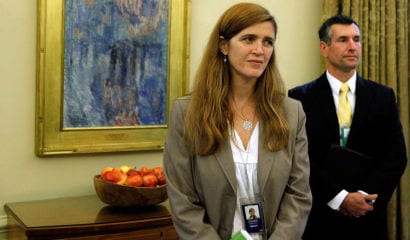 That was your father’s human rights. Today’s version, as articulated by Barack Obama’s pick for United Nations ambassador Samantha Power, is about going on the military offensive.

Human rights “can now mean helping the Marine Corps formulate counterinsurgency techniques; pounding the drums for air strikes (of a strictly surgical nature, of course); lobbying for troop escalations in various conquered nations — all for noble humanitarian ends,” Chase Madar has written in the American Conservative.

For Ms. Power and her ilk, campaigns and press releases are for wimps. Real human rights demand military intervention. That means a larger presence for the U.S. military abroad. In this respect, Ms. Powers’ heroes are the great imperialists and disparagers of national sovereignty of yore — men like William Ewart Gladstone (“Do not let me be told that one nation has no authority over another. Every nation, and if need be every human being, has authority on behalf of humanity and of justice”) and Teddy Roosevelt (Nations sometimes commit crimes “on so vast a scale and of such peculiar horror” that we have a duty to step in. Depending on the “degree of the atrocity and upon our power to remedy it” it may require the “force of arms…to put a stop to intolerable conditions”).

What distinguishes such statesmen is their ability to care. Not about the Missouri and Tennessee and Alabama sons and daughters who will lose limbs or lives in some Arabian desert for the sake of a people who hate us. Not about their widows and orphans. Not about the countless lives uprooted from small town America and relocated to a series of overseas army bases. Not for the small towns themselves, emptied of their native sons and daughters. Not even about the taxes taken from hardworking Americans to buy the gunships and drones. Such statesmen care nothing about their own backyard, only about the goings on in distant crevices, the names of whose towns escape them.

But then the deracinated Ms. Power is a typical Washingtonian, born in Ireland, grade schooled in Pittsburgh, high schooled in Atlanta, educated at Ivy League schools in Connecticut and Massachusetts, employed as a journalist in Yugoslavia, but really from nowhere, as homeless as a hobo. She will fit right in at the United Nations.

For Samantha Power it will always be Wartime in America, for there is always some atrocity being committed in some lost corner of the globe. What an opportunity this presents for Samantha, the pin up girl for Endless War!

MS. POWER MADE her name with her 2003 Pulitzer Prize–winning book, A Problem From Hell: America and the Age of Genocide. In its pages she chastised America for its reluctance to use the G word. So distant are fears of American imperialism that even a Harvard liberal can excoriate America for its failure to ride to the rescue during the Rwandan genocide, the Srebrenica massacre, and numberless other humanitarian crises. In order to work out this contradiction in her mind she wrote A Problem From Hell. Her conclusion? Since America has an excess of tanks, planes, and disposable young men it is our moral obligation to be the world’s cavalry. And since the Finns, Argentinians, Canadians, et al. do not have as many tank and helicopters and their young men are not nearly as disposable, they can stay home with a clear conscience.

Of course, the biggest problem with Power’s Problem From Hell is it selectivity. The U.S. government has not always been the Good Cop on the World Beat. Madar provides a long list of genocides that U.S. administrations (as opposed to the U.S. people) have tacitly supported: The Indonesian genocide in East Timor. The Mayan massacres in Guatemala. Critics of humanitarian military intervention also point out the inconsistencies. Why intervene in Libya and not Bahrain, Yemen, or Côte d’Ivoire? Does it really come down to which civil war or atrocity gets the most television coverage?

Another problem with the problem from hell is that not all humanitarian crises are Hitlerian. When exactly does a massacre become an atrocity become a genocide? At which point is the United States morally obligated to send in the troops? That’s a rhetorical question. No one knows.

“The Men in Grey who rule the televised America won’t protect American interests because they have no interest in America,” said Bill Kauffman. That goes double for this woman in grey.