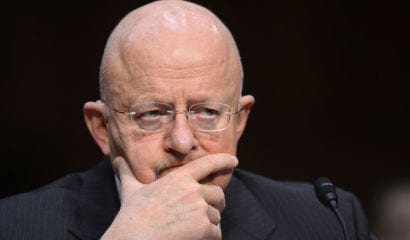 President Obama and his administration now have a track record. Their patterns of behavior are well-established. For example, they utilize distraction, division, and deception as means of dealing with adverse developments, such as the recent (and continuing) run of “scandals.” There is also a pattern of aggressive use of federal power for political purposes, even when laws and civil liberties get trampled in the process.

Let’s consider this as it applies to the National Security Agency surveillance issue now in the news. From the administration and its allies, and from Washington-centric politicians in both parties, the responsive narrative on the NSA’s pervasive surveillance of Americans is clear.

“Trust us,” our wiser Washington sages say in unison, “we’re not interested in you ordinary people, we’re after terrorists.” For emphasis they’ll even mention an Islamist terrorist or two, remarking — as Senator Dianne Feinstein did on last Sunday’s talk shows — that this is about the pursuit of “fanaticism” originating in “a different culture.”

In the same vein, General Michael Hayden, former NSA and CIA director, said that the massive data base maintained by NSA is only asked to respond to “queries” that are “related to terrorism.” He added that the volume of information collected has been “expanded” under President Obama, but insisted that the records are never looked at unless they are linked to terrorism.

Of course, the companies whose servers are laid bare to government collection and examination cannot see the “queries” directed at their data. And, we are told, the queries can come from anyone “cleared for PRISM access.” NSA whistle blower and consulting firm employee Edward Snowden says that he had such clearance. As a result, he claims, without any further legal or administrative permission, his “PRISM access” enabled him to look at your email, and that of your accountant, and pretty much anyone else.

With this in mind, should we take comfort from the claim that the government’s inquiries and surveillance are aimed solely at “terrorism”? Well, perhaps it depends on what the definition of “terrorism” is. In 2009, early in President Obama’s first term, the Department of Homeland Security sent a secret memorandum to assorted law enforcement agencies targeting as “terror” threats those who, for example, oppose “federal authority” and favor “state or local authority,” or oppose “abortion or immigration.”

In addition, for several years now, assorted DHS statements on “terrorism” have been laced with references to “right-wing” and “antigovernment” sentiments. In 2011, a DHS training video depicted only white males as terrorists; the video did not portray any terrorists as Muslims, although press reports indicate that in 2009 and 2010 every single one of the 126 people indicted on terror-related charges was a Muslim.

So, when our Washington protectors say they are only after “terrorists,” remember that in current federal enforcement parlance, that term refers just as much to this administration’s critics as it does to Islamists. Bear in mind the chorus of Democrats who called Tea Party organizations “terrorist.” And recall, too, our President’s very recent speech proclaiming that the war against Islamist terror is over. In sum, do not assume that NSA “queries” related to “terrorism” are aimed only at real terrorists, as opposed to Americans who challenge the policies of the Obama administration.

Defenders of the surveillance scheme have also reminded us that there are all sorts of legal restrictions on the use of the information collected by NSA. These constraints, they claim, provide a shield against inappropriate inquiries and abuse of power even if one is skeptical about the assertion of a narrow focus on “terrorism.”

But wait. This reassurance came only after the President’s Director of National Intelligence, James R. Clapper, was asked by Democratic Senator Ron Wyden of Oregon, in a Senate Intelligence Committee hearing on March 12, whether the NSA collects “any type of data at all on millions or hundreds of millions of Americans.” Mr. Clapper had been shown the question in advance. Nevertheless his answer, given under oath, was an unequivocal — and unequivocally false — “No, sir.” With this history, why should we believe anything administration officials tell us?

Consider as well that Mr. Snowden, with his strikingly unremarkable résumé, secured “PRISM access” clearance while employed by a government contractor. Press reports indicate that he was one of literally thousands of government and private contractor employees with “PRISM access” to the emails, text messages, Internet activity, and other electronic information of, well, essentially everyone in the United States.

Recall, with Mr. Snowden’s career path in mind, our President’s track record. The Obama administration has already engaged in systematic and widespread hiring of left-wing political activists into career government positions at the Department of Justice and presumably elsewhere. Taking this into account, it is merely logical to assume that over the past four years many of the administration’s activist worms have found their way into the woodwork at NSA and its contractors.

Given recent revelations, it is also common sense to suspect that at least some federal and private sector people with “PRISM access” clearance are individuals willing and able to use and abuse their power for political purposes. After all, IRS employees were subject to all manner of legal restrictions designed to prohibit the abuse of their powers to intimidate administration critics. Yet legions of IRS types took to just that task with relish, and most have brazenly obstructed investigations of their conduct.

From several years of observation we now know that the Obama administration does not fail to take advantage of opportunities, even when it must bend or even break the law to do so. There will be misuse and abuse of access to the trove of potentially sensitive and very personal information accessible through PRISM and similar surveillance programs. Such conduct is absolutely in character for our President and his administration. It is who they are. It is what they do.