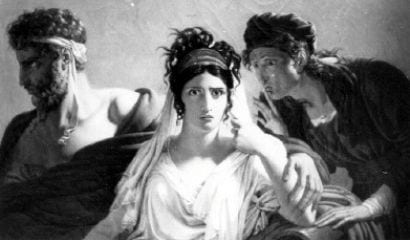 WE HEAR much about “the coarsening of the culture” nowadays but I submit that there is something worse, and that is cultural refining. I know this because I learned it in college, when I could not resist courses whose catalogue descriptions began with the words “The flowering of…,” especially if they were French, which they usually are.

Tragedy 303. The flowering of 17th-century French neoclassical drama. An intensive study of the verse plays of Jean Racine, with special emphasis on Phèdre.

Seventeenth-century French drama is called neoclassical because it followed the rules of ancient Greek tragedy. These rules, called the “classical unities,” are the unity of place, meaning that a play can have only one set; the unity of time, meaning that the events of the story, no matter how titanic and far-reaching, must all happen on a single day; and the unity of action, meaning there can be only one story line, with no subplots and no comic relief in the hang-loose Shakespearean manner.

Hanging loose was a non-non in the France of Louis XIV, who was such a stickler for etiquette that knuckles were deemed rude: A Versailles courtier had to use his index finger to knock on a marquis’s door but only his pinkie to knock on a duke’s. This rigid politesse inevitably spread to the Crown-supported stage. To place pointlessly elegant restrictions on themselves, the neoclassical playwrights expanded Aristotle’s dictum on theatrical decorum. He merely said that violence and murder must not take place onstage, but the neoclassicists decided that it was bad taste to let anything happen onstage. Instead of showing the action they tell it; the story unfolds in long declamatory speeches hurled at those busybodies in togas known as confidents, who serve a threefold purpose: pumping the principals to find out what they are going to do, listening while they tell what they did, and rushing onstage to announce that something has happened.

To achieve the very pinnacle of good taste, the neoclassicists wrote their plays entirely in alexandrine verse, a rarefied meter that is uniquely tailored to the French language and fits no other. An alexandrine had to have 12 beats and four stresses and it had to rhyme with the next line. If it didn’t, the Academie Française would send somebody around to kneecap you.

Based on the Hippolytus of Euripedes, Racine’s Phèdre (Phaedra) is about an older woman’s passion for her stepson. Set in the mythical Greek city of Troezen, the cast is as follows:

The play opens with Hippolytus confiding in his confident that he has decided to conduct a search for his father, who is having the usual Greek problem of failing to return home promptly from a journey. He adds that he is glad to have an excuse to get away from Troezen at this time because his stepmother, Phèdre, has been inexplicably hostile to him of late, and also because…well, something has happened.

Theramenes is all ears so Hippolytus proceeds to rompre le silence—what spies do under torture—confessing that his former immunity to female charms has collapsed and he has fallen in love with Aricie, “that sole survivor of an impious race,” i.e., the daughter of the rival political family that tried unsuccessfully to overthrow Theseus and wrest his kingdom from him.

Unfortunately, Aricie is under house arrest. A firm believer in heredity, Theseus decided that her bloodlines were so politically dangerous to him that she must never be allowed to reproduce. Before leaving on his journey, he ordered her held hostage in his palace so she could not meet any men, and had signs reading Défense d’épouser Aricie posted in the Troezen metro. The only man he trusts her with is Hippolytus because it is well known that il est chaste.

Now that Hippolytus has led off, the logorrhea shifts into high gear. Enter Oenone, Phèdre’s confident, with word that something has happened: Her mistress is dying of une maladie secrète.

Hippolytus and Theramenes exit and Phèdre enters to announce that something has happened: Her strength has failed, her hair (cheveux) has grown heavy, her eyes (yeux) have gone bad, her knees have buckled, and she has lost her mind.

Oenone perks up, certain that these afflictions are emotionally based, the result of a world-class secret that Phèdre has kept to herself instead of confiding it to her confident. Referring contemptuously to secret-keeping as le silence inhumain, she starts to pump.

Phèdre romps the silence and names Hippolytus, then pours out the whole story of her guilty passion in 50 exquisitely rhymed alexandrines, explaining that she has only pretended to hate her stepson in order to conceal her lust for him.

Suddenly they are interrupted by Panope, a beginning confident apprenticed to Oenone, who enters with the news that something has happened: Theseus has died on his way home from his journey.

Now that Phèdre is a widow, her guilty passion is no longer guilty. Egged on by Oenone, she decides to tell Hippolytus that she loves him.

But Hippolytus’ tongue has also been loosened by news of his father’s death. In the next act he declares his love for Aricie. He wants her, he says, bad blood and all, and she might as well stay and hear him out because j’ai commencé de rompre le silence. When these people start, they can’t stop.

But just then he is interrupted by his confident, Theramenes, who tells him that Phèdre wishes to see him. Aricie and Theramenes exit and Phèdre enters and confronts the virginal hunk. She declares her passion for him but the prissy Hippolytus recoils in horror and the spurned Phèdre flees.

As soon as she exits, Theramenes enters to find out what happened, but Hippolytus refuses to tell him, saying cet horrible secrète must remain forever buried. It’s a futile thing to say to a confident, but the boy is thick.

The next act opens with the scorned Phèdre in a tirade, calling Hippolytus Detestable! Sauvage! Odieux! so it will all rhyme with mes yeux.

Suddenly Oenone enters with word that something has happened: Theseus isn’t dead after all; that new confident, Panope, got it all wrong. He’s alive and well and will be home any minute. Phèdre panics. The puritanical Hippolytus will surely tell his father that she put the make on him. What can she do to protect herself against her husband’s certain fury?

Oenone comes up with a plan. She volunteers to go to Theseus and accuse Hippolytus of attempted rape before he gets a chance to accuse Phèdre of attempted adultery. Phèdre agrees to the deception and Oenone bustles off.

It’s a bad time to approach Theseus because Theramenes has just told him that Hippolytus wants to marry Aricie. When Oenone tells him that the prince tried to rape his stepmother, Theseus bellows Perfide! Monstre! Fils criminel! Profane adultère! Lache incestueux! because the next line ends in les yeux.

In the next scene, Hippolytus and Aricie make plans to run away together. Worried that someone will find out, she asks him, “Can you keep silent in this mortal danger?” This has to be the silliest line in the whole play. Can any of these people shut up? No, my leetle cabbage, as soon as your back is turned he will run and tell his confident every word you said.

Just then Panope enters with word that something has happened. Oenone has drowned herself. It was, she says, a mad (furieux) act that will hide her forever from our eyes (yeux). Never mind our ears, they don’t rhyme.

While everyone is talking about what happened to Oenone, Theramenes enters to announce that something has happened to Hippolytus. He has been killed in a chariot wreck. It was a terrible sight (affreux, yeux) but the mortally wounded prince used his last breath to confide in his confident, telling Theramenes that nothing happened between himself and Phèdre, and to beg his father not to let anything happen to Aricie. Nothing ever will as long as she stays onstage.

While everyone is talking about what happened to Hippolytus, Phèdre enters with the news that something has happened to her. She has taken poison, but before she dies she wants to tell everyone what really happened, and proceeds to clear her stepson’s name.

Only one eye this time, she doesn’t have much wind left. After she dies, Theseus vows to honor his son’s last wish, declaring that he will adopt Aricie as his daughter and treat her as a member of the family.

He has to: fille rhymes with famille.