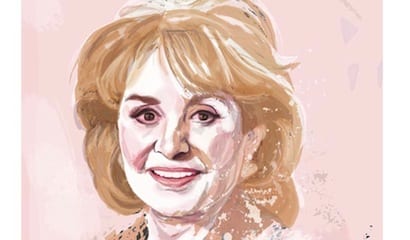 IT WAS a stop-the-presses moment, one that all Americans will remember in 50 years, just as some of us recall when the news of JFK’s assassination came over the airwaves. Yes, the day Barbara Walters announced she was quitting television—except for a few specials—will go down as one of those points in time Americans will never forget. Baba Wawa, as writer Michael Thomas christened her because of a slight speech impediment, is probably the most embarrassing public figure America has ever produced, and I include great American warts such as Monica Lewinsky, Al Sharpton, Anthony Weiner, and Dennis Rodman on this list.

Mind you, I haven’t spoken to her in 59 years, not that we got along that well even back in 1954. It was Christmas vacation for me, and having been locked up in boarding school since September, I had gone to Palm Beach with a childhood friend, Aleco Goulandris, who was nine years older than me and, more importantly, owned a Porsche speedster that he had sent down from New York. The day after Christmas, Alec asked me to drive him down to Miami Beach where he had reserved a hotel suite for a girl and himself. “If you drive me down you can keep the car until you come back and get me in a couple of days.” Now that was the kind of proposal no 16-year-old could refuse, 25 years before Mario Puzo made the saying popular. Once in Miami we drove into the brand new glitzy Fontainebleau Hotel, pronounced Fountainblue by all and sundry. Babs was waiting in the lobby and introductions were made. She was kinda cute and very sexy, in a Noo Yawk sort of way, and her accent was different from what it eventually became. She asked me if I liked Miami and I remember saying that I was more of a Palm Beach type. Then I was shooed away by the honeymooners and had two days of flashing the car around the debs and swells that Palm Beach was full of in those days. I eventually drove back to Miami, picked up Alec, and that was that.

Thirty-eight years later, during the Barcelona Olympics, Alec was invited to the royal box of King Juan Carlos—a close friend of his. Henry Kissinger and the by-now very famous Baba Wawa had also been invited. Alec didn’t recognize her and politely shook her hand. But she remembered him, quite fondly, in fact, and playacted that her feelings were hurt. My friend told me later he felt awful. But it was a nice gesture on her part. I guess women don’t forget as easily as we horrible men do.

La Walters made it very big during the late ’60s and early ’70s with something called the Morning Show, or something to that effect, where she interviewed celebrities, actors, ventriloquists, and politicians looking to become known to the great American public. Her strength was her niceness and her ability to ask soft questions of such banality that even those with an IQ in single figures were made to look intelligent. Our Babs is not a reader; thus she kept to subjects that were familiar even to dumb models. Her most famous moment came when she asked Katherine Hepburn what kind of tree she would have liked to have been had she been a tree. La Hepburn looked as if she had been hit by a thunderbolt.

Because of her popularity, ABC eventually decided she should go prime time and promoted her to co-anchor with Harry Reasoner, a professional, who looked as much at ease next to her as a duchess who had walked into a brothel mistaking it for her drawing room. But Baba Wawa won out, bringing the news down to her level as the number of viewers went up and up.

It was just about that time that the news and celebrity gossip became one and the same. In fact gossip was the news, and la Walters had a hell of a lot to do with it. The nadir was when Menachem Begin of Israel and Anwar Sadat of Egypt had their historic meeting in Jerusalem, went to Camp David, and each sat next to Walters, calling her “Barbara” and answering her questions like two little kids in front of their grandma. Both men thought it important to have Barbara on their side, so we had the rather sickmaking spectacle of two leaders sucking up to somebody who once asked my wife whether Turkey had a common frontier with Yugoslavia because she was certain the Balkan war would spill over. When my wife said no, there was a place called Bulgaria, another called Greece, and a Black Sea in between, Babs didn’t bat an eye, but charmingly announced she was no good in geography while in school.

None of this should be a surprise coming from a woman who believes that we Homo saps. have muscles called “lateral pectosises,” who once hit Tom Hanks in the arm with a titanium golf club, whose idea of a scoop is interviewing four cartoon turtles, and who, to this day, labors under the illusion that Warren Beatty is anything but a talentless hack. Years ago Baba released a special program, unseen by me, called “30 Mistakes in 30 Years”: a better title would have been “My 30-Plus Year Mistake.” After all, her other gaffes and lapses of judgment aside, she is responsible for giving us The View, an hour-long descent into hell in which she appears alongside such harpies as Joy “Keep your tits perky!” Behar and Sherri “Speaking as a girl who had a lot of abortions” Shepherd. During his 2008 bid for the Republican nomination, Dr. Ron Paul (who saved me that year from voting for the Constitution Party) was subjected by the View gals to a long bitchy harangue because he, a physician who has delivered over 4,000 babies, dares not to support abortion rights. Taedium maximum.

SO, NEXT YEAR arguably the greatest star in the history of TV news will be off the air. But her legacy will go on and on. What our Babs managed to do in these 40 years of stardom was to lower the level and bring down the bar of what once upon a time was known as news reporting and political comment. She used every cliché ever uttered, never once made an intelligent remark. To adapt Trotsky about Comrade Macdonald, “Everyone has the right to be stupid, but Barbara Walters abused the privilege.” The insatiable hunger for fame and celebrity that America has suffered from since the ’60s can almost be traced to her rise. The terminal political correctness and therapy speech, the shallow, materialistic, celebrity-obsessed, and infantile contemporary culture: all these our Barbara can make a reasonable claim to. Understatement and restraint were not her strong points. Interviewing models—actually coat hangers with faces—which she adored doing, did not help her look inwardly. Yet the American people love her, as do the networks, those cathedrals of our slob culture that one day will be recognized as America’s greatest contribution to the human race. And it gets better, or worse rather. There are thousands of Baba Wawa wannabes out there, trying to make the big time by lowering the bar little by little. In a world in which texting has replaced knowledge and “feelings” are more important than facts, Queen Barbara reigns supreme. But next year it will be no more. Sigh!