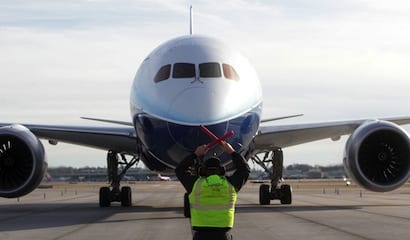 In April, I departed for Dallas as part of my book tour. “Tour” might be a bit of an exaggeration. Most of my stops were virtual, with me on the other end of a telephone line from a radio talk show host, patiently waiting through local traffic and weather reports plus the odd commercial for an area barbecue joint to make my pitch to the listeners.

But now I was boarding an actual airplane to go on a real, live television show to promote my book—Devouring Freedom! In bookstores near you! Routine travel for some, but real heady stuff for a first-time author. There was just one problem: I was sick as a dog.

The coughing and hacking had started just two days before. Now shivering and chills were starting to set in. Add the fact that my voice was strained from talking about my book nonstop for weeks and I was getting very hoarse. I was probably too weak to make the trip and definitely in no shape to deliver a monologue about the government.

Yet what they used to say of postal delivery men is still true of authors, especially first-time ones: “Neither snow nor rain nor heat nor gloom of night stays these couriers from the swift completion of their appointed rounds.” Even if they’re just TV talk show rounds. I’d already left a bachelor party weeks before to board the 3 a.m. train to New York so my jacket cover could be flashed across the screen for five seconds. How bad could this be?

Shortly before I went on, I found that the lower registers of my voice were still functional enough for me to speak intelligibly, if unnaturally. I rehearsed speaking in this unfamiliar rasp until the producer was surely afraid he had booked a guest with Tourette’s syndrome.

The show must go on, and it did. I babbled with varying degrees of coherence in response to the questions I was asked. The host dutifully held up a copy of my book. “Were you sick?” a friend who watched the program later emailed. “You sounded like Pat Buchanan if he had testosterone injections.”

Immediately after the broadcast, I went to the hotel and collapsed into bed. I had fevered dreams all night long about raucous parties being held in my room, despite going to sleep at 5:30. I imagined myself to be driving through the building in taxi cabs, consorting with Mafia dons and college friends.

When I awoke, I could not speak. My voice was nonexistent. My inflamed throat could scarcely make a sound. Navigating my way out of the hotel and through the airport in this condition was like a Vaudeville skit.

YOU DON’T really appreciate your voice until you lose it. I couldn’t call a doctor because no one could understand me. Even my gargling was silent, except for the sound of the water circulating in my throat. This is a bit of a professional hazard for someone who interviews people for a living, and who is trying to be interviewed about his book.

That wasn’t my only malady, of course. One of my eyelids swelled shut. According to the hypochondriac-baiting medical websites, this was a sign I was about to get headaches so painful there was a good chance I’d commit suicide. I escaped this fate, though the sight of me did make a bank teller cry.

Every morning, I woke up and tried to speak. For 13 straight days, I failed. On the 14th day, the words finally came. My weak, strangled voice sounded sweeter to me than Aretha Franklin. I then went to a throat doctor, who promptly advised me to shut up (advice any political commentator has heard often). Really, is there no voice for the voiceless?