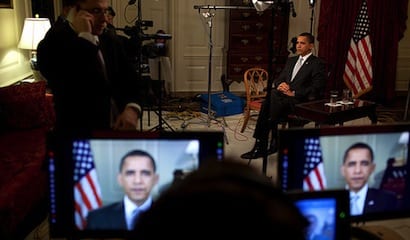 Both parties constantly make accusations that their rival is engaged in hypocritical, unethical, or illegal behavior. Given the drastic lack of ideological diversity in the American elite media, the general public usually only hears about such accusations against Republicans.

Beyond the fact that biased reporting shapes public opinion to favor the left, it may also have an effect on law enforcement. The persistent lies that have been told about right-leaning political groups by leading Democrats, including President Obama himself, may have led to the IRS abuses of power that we’ve heard so much about in recent weeks.

Even assuming that the Internal Revenue Service decided to target conservative groups without explicit orders, the fact is that Obama and other Democrats have been smearing conservatives for so long with vague but outrageous charges of criminality, it’s no wonder that some bureaucratic goons decided to harass “tea party” and “patriot” groups.

The context of the audits is quite clear in retrospect, as Wall Street Journal columnist Kimberley Strassel demonstrated in an excellent piece the other week. After seeing that independent groups like Americans for Prosperity and the U.S. Chamber of Commerce were spending big dollars to defeat the president and boost his Republican opponent, Mitt Romney, the Obama campaign and the Democratic National Committee appear to have decided to go into overdrive.

Their attacks were designed to blunt the effectiveness of conservative groups’ advertising by getting a compliant media to start complaining about them. A person identified as a top White House official in an article at the Huffington Post described these campaign ads — campaign ads! — as “the most insidious power grab that we have seen in a very long time.” It didn’t matter whether the left’s insinuations were true or false. As Strassel demonstrated in her column, Obama kicked them off with a blistering attack on Americans for Prosperity in August of 2010, the very same month the IRS decided to begin targeting conservatives:

Besides being an instance of gratuitous xenophobia, the reference to “foreign-controlled corporations” foreshadowed the Obamaite attacks that were to come on the U.S. Chamber of Commerce. Those began in earnest in October 2010 when the left-wing partisan dirt shop Think Progress trotted out non-sourced allegations that the Chamber was using funds donated by foreign companies to pay for ads against Obama. The Chamber immediately denounced the accusation as false.

If Republicans decided to go around making such outrageous accusations without providing a shred of proof for them, you can bet that the media would have attacked them mercilessly just as they did radio host Rush Limbaugh after he insulted left-wing activist Sandra Fluke. But because it was Democrats who were making the wild claims, their remarks not only were not condemned by the media, they were gleefully repeated.

The Los Angeles Times crowed that the lie campaign was “gaining traction.” The New York Times editorial page took the Think Progress nonsense at face value and wrote a huffy editorial about it. MSNBC host Chris Matthews dismissed the lack of proof: “If you throw a pile of dollars into a pile of dollars, what difference does it make?”

The Democratic National Committee could not have purchased ads that carried their message more effectively. The attacks against Americans for Prosperity continued to gain wide approval from the self-described mainstream media. Obama and other powerful Democrats, such as senior adviser David Axelrod and Obamacare author Sen. Max Baucus (D-Montana), continued to repeat their attacks on “shadowy groups with harmless-sounding names.”

While the lies about the Chamber eventually died down, the media’s appetite for unsourced rumors against right-leaning groups or individuals did not abate. The Senate’s top Democrat, Harry Reid, got into the act in 2012 when he claimed, on the floor of the body he oversees, that GOP presidential candidate Mitt Romney “hasn’t paid any taxes for 10 years,” a charge the former Massachusetts governor strenuously denied.

Just like the attacks on the independent conservative groups, Reid didn’t produce any evidence for his assertion. “Let him prove that he has paid taxes, because he hasn’t,” Reid said, claiming he had an informant who was in a position to know such things. Romney later released a summary of his tax returns for the past 20 years, proving that he had, in fact, paid taxes.

Reid was undeterred, however, as he continued to insist that “he’s hiding something.” Once again, Democrats had played the liberal media like a fiddle. Reid had peddled a false story, but instead of receiving the furious condemnation that a fair press would have given him, he managed to provide a perfect undercurrent narrative for Democrats to use with uninformed voters who did not know the facts.

With the election over and new scandals breaking every week, it seems that liberals’ love of fabricating nonsense against conservatives is finally becoming the liability it should have been long ago.

At this stage of the investigation of the IRS scandal, it is unclear whether the Obama White House or other top Democratic politicians directed the tax enforcement agency to deliberately audit Tea Party groups and to delay their applications for tax-exempt status. What is clear is that President Obama and fellow Democrats, with the willing assistance from the supposedly “objective” media, created a climate of intimidation and slander that quite easily could have spurred the IRS to abuse its power.