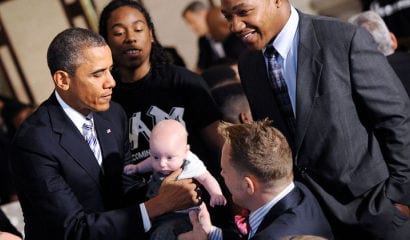 The Obama administration has reached the unenviable stage in which it’s almost impossible to determine where one scandal ends and another begins.

The most recent case in point is President Obama’s decision to kinda sorta intervene in the Syrian civil war that is now in its third year.

On Thursday, Ben Rhodes’s statement said that the intelligence community had concluded that in several uses of chemical weapons, the Syrian regime of Bashar Assad had killed between 100 and 150 people in the Syrian rebellion.

Later that day, Obama announced that he had decided to send arms and other military aid — so far undefined — to Syrian rebels. Even CBS yawned.

Some on the right are saying that Obama is wagging the dog, creating a phony military conflict to take the media’s attention off the scandals in which his administration is awash. But that’s not what he’s doing. It’s much worse than that.

The timing is right. The scandals are so huge that people are naturally suspicious of Obama pulling that sort of stunt. (To correct last week’s list I have to add the biggest scandal — Obama’s dereliction of duty when Americans were under attack in Benghazi on the anniversary of 9/11 — to the IRS mess, the Justice Department’s actions on Fox News and the Associated Press, and the NSA “PRISM” program, to name but a few.) In similar times, when Monica was still loose among the grand juries, Bubba took it on himself to bomb an aspirin factory in Sudan.

Bubba did everything in the “wag the dog” playbook. Every bit of stage-managed drama played itself out. There was a televised surprise speech late one evening to announce the cruise missile strike, high stage-managed drama to accompany that nonsense. And though no targets of any value to anyone felt our military might, real cruise missiles killed real people. The press, called hurriedly from the local bars, responded predictably with grave coverage that succeeded, for at least a day or two, in distracting the world from the mess Clinton had made for himself.

Obama didn’t bother to engineer any drama over Syria. There was no speech, no bombs fell. He’s not even bothering to try to wag the dog.

According to the New York Times:

For two years, President Obama has resisted being drawn deeper into the civil war in Syria. It was a miserable problem, he told aides, and not one he thought he could solve. At most, it could be managed. And besides, he wanted to be remembered for getting out of Middle East wars, not embarking on new ones. So when Mr. Obama agreed this week for the first time to send small arms and ammunition to Syrian rebel forces, he had to be almost dragged into the decision at a time when critics, some advisers and even Bill Clinton were pressing for more action. Coming so late into the conflict, Mr. Obama expressed no confidence it would change the outcome, but privately expressed hope it might buy time to bring about a negotiated settlement.

This is foreign policy by farce. What the Times — the most faithful chronicler of liberalism — describes is the most desultory, most pointless and least compelling case for a war in American history.

Any case for Obama’s action would have to answer a few basic questions. What are we trying to accomplish? In other words, what is the outcome we desire and how will Obama’s decision produce it for us?

It’s impossible to say what outcome we seek because the president is evidently writing off any prospect of affecting the outcome. Which probably doesn’t matter much because the Syrian rebellion is about nothing more than which bunch of terrorists rules that country for the foreseeable future.

On one side of the rebellion we have the Assad regime, Iran, and one of its proxies, the Hezbollah terrorist organization based in Lebanon. On the other are various al Qaeda affiliates and other Muslim jihadists who above all desire the United States and Israel to disappear from the map. And we have a president who’s decided that he can’t affect who wins. In that, if nothing else, he’s right.

So what are we really trying to do it in this less-than-half-hearted manner?

One of the oddest facts about Obama’s presidency is that his national security and foreign policy agendas aren’t driven by our allies, enemies, and interests. They’re driven by his domestic agenda and his domestic political strength at a given moment.

Let’s not forget that Obama was elected as a peace candidate promising to end the wars in Iraq and Afghanistan. He is the president that allowed France and NATO to commit us to war in Libya. He wasn’t paying attention to Benghazi on 9/11 last year because he was most concerned with his re-election. He’s persevering in his battle to close Gitmo because it pleases his liberal base, not because it would make America any safer.

And, only a couple of weeks ago, he told the world that the war on terrorism is over and that we should repeal the Authorization of the Use of Military Force passed after the 9/11 attacks.

Obama’s mini-intervention in Syria is driven by the same sort of domestic political considerations, not by a foreign policy agenda. Obama is bombarded daily by John McCain who wants to do a lot more in Syria than Obama does. McCain wants to risk American pilots’ lives by establishing a no-fly zone against Assad’s forces. McCain has been to Syria, met with some of the rebels, and returned to demand more support for them. Even Bill Clinton reportedly said that Obama would look like a “total fool” if he proceeded cautiously on Syria.

We don’t know which of Obama’s advisors were exerting the “heavy pressure” to act on him that the Times reports, or what their motivations may be. (Samantha Power, Obama’s nominee for UN ambassador, is more of an interventionist than McCain. This pointless, irrelevant action sounds like something she’d advocate.) Some may have pushed to create a “wag the dog” scenario, but two things are more likely.

First, Obama, as he proved in his delay of a decision of the Afghanistan surge by six months’ of deliberations, will delay foreign policy and national security decisions until domestic politics compel a decision. Second, he has apparently decided on a policy that minimizes political risk and avoids responsibility for the outcome.

Neither Assad nor Putin, far less the ayatollahs in Tehran, will be very upset with Obama’s actions. (In response to Obama’s tiptoeing into the conflict, Iran reportedly is sending 4,000 Iranian Revolutionary Guard Corps troops to fight for Assad.) They know, better than he, that arming and training the rebels with light weapons isn’t going to change anything.

Republicans can’t seem to shake off McCain’s influence on their foreign policy positions. Which renders them irrelevant to the discussion. More importantly, Obama has rendered America irrelevant to what is happening in the Middle East. The path for Russia, Iran, and others — including China — is clear for them do anything they’d like.