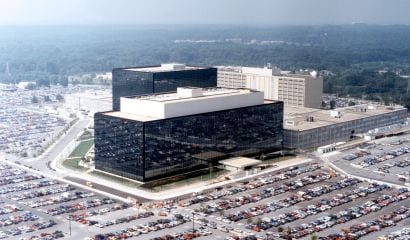 “Wooly Bully,” the famous hit of Sam the Sham and the Pharaohs, was recorded almost fifty years ago. It begins with the bland assertion, “Matty told Hatty about a thing she saw.” But today, the mere existence of that innocent sounding conversation might bring suspicion. What began as an ordinary exchange between Matty and Hatty today could be a cause célèbre, forcing us to examine the size of government and how intrusive it should be allowed to be.

You don’t have to be John le Carré or Ian Fleming, the creator of James Bond, to know that no longer is anything as it seems. Nor do you have to rent Jason Bourne movies to participate vicariously in high speed, high technology espionage. All you have to do is make a telephone call. Many Americans now realize that in today’s opaque world of electronic snooping from vast, high tech installations such as the National Security Agency at Fort Meade, Maryland, a simple sentence of Matty could be picked up by an orbiting overhead platform, a satellite high above the Earth, by the nation’s premier intelligence gathering agency.

It is well known that there are over a dozen agencies in the so-called and benign sounding intelligence community, lining both sides of the swirling Potomac and situated outside our nation’s capital. It is no secret that each day, thousands of workers in signals intelligence, known as SIGINT, commute to Fort Meade, directed to be digital peeping Toms and Thomasinas — empowered to conduct the nation’s business of voyeurism, mandated to peer into the lives of others, and perhaps comparing their own lots in life in the process. Indeed, Fort Meade houses an entire city of Dilberts, each affixed to multiple monitors in electronic theaters and gray cubicles that if lined up, could stretch into an infinity as vast as cyberspace itself.

Were she with us today, Matty would soon know that whenever she talked to Hatty, the time and date of that call and its duration would be recorded and have potential strategic value to armies of government geeks. She would learn the meaning of metadata — “data about data,” or “information about information” — a word that aims to fascinate but whose faceless creator is not easy to identify. She would know that vast quantities of information are collected about plain folks, just going about their daily business of buying, making, and selling, and lining up at Walmart for household products and at Starbucks for a tall latte. She would realize that the U.S. government’s appetite for information is unlimited — with metadata-driven SIGINT snoopers inserting themselves into social intercourse as fast as their little electromagnetic waves can carry them.

Further, Hatty herself would soon know that because of her friendship with the communicative Matty, she would become an object of fascination for thousands of government employees — festooned with electronic devices — and some could be bristling with the desire to insinuate, collect, inflict, and impede. Even if she tried to escape by getting an unlisted number, it would be of no avail.

This is not just a national issue. Since electromagnetic waves traverse national borders as carriers of information in their high-speed flight, America’s role in the world as a steward of technology would also become fit for inquiry. Based on the UN’s March 2013 estimate of 6 billion cell phones on Earth, it is conceivable that there are many Matties and Hatties out there. Indeed, the words of Matty could soon be on the agenda of the G-8, an awkward group of men and women looking for something to do.

President Obama is indeed in a compromised situation. In view of the administration’s misrepresentation of what happened at Benghazi, mismanagement by the Internal Revenue Service and its outrageous targeting of conservative non-profits, and the recent furor over the subpoena of AP correspondents’ telephone records, the president’s defense of NSA’s intrusiveness should be met with skepticism.

It is true that the country cannot have both 100 percent security and 100 percent privacy, as stated by the president. However, this assertion implies that there are only two alternatives — making it a familiar false dichotomy.

One wonders if the president will need to position himself as the champion of ordinary folks feeling violated by a massive government apparatus, looking wistfully into a teleprompter and saying, “We are all Matties and Hatties.” Or maybe he will decide to seize the opportunity as a teachable moment about the nuances of cyberspace, telling us that data about data obtained from high altitude is good and can make us happier.

It could be that we have seen only the beginning of metadata, a work in progress. In high tech parlance, metadata has already begotten metametadata, yet another metamorphosis to anticipate.