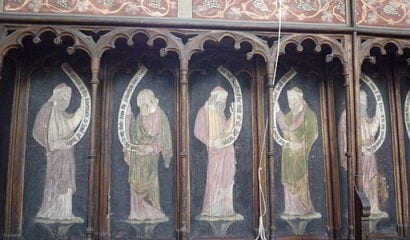 Remember the power ballad? It was a subgenre of rock music pioneered by Boston in 1976 and Styx a year later. From near-symphonic beginnings in “More Than a Feeling” and “Come Sail Away,” the power ballad elbowed its way to prominence in the early Eighties.

Tom Scholz of Boston and Dennis DeYoung of Styx welded songwriting craftsmanship to imaginative orchestration and “wall of sound” microphone placements, mixing electric and acoustic guitars in tunes that did more than build to crescendos. Artists like Bonnie Tyler and REO Speedwagon then parlayed their own examples of the form into successful recording careers.

Power ballad pioneers play now in places like state fairs. But when the power ballad fell out of fashion, it found a home among the “praise bands” of “Christian Rock.” Where power ballads go, praise bands follow. That unabashedly Christian lyrics can be heard on FM radio is a good thing, but that power ballads also enabled praise bands to displace so many church choirs ought to give us pause. Power ballads are not hymns. That is precisely the problem with singing them during church services, even — perhaps especially– services aimed at younger people.

Praise bands replaced many traditional choirs in part because church musicians were not always conscious of their own assumptions. They listened to car radios while driving to rehearsals. Like everyone else, they smiled at the playful grunge of “Spirit in the Sky” and the crypto-Christian bonhomie of “Get Together.” Hook-laden songs on the FM dial were more fun to play than old-timey hymns that required little or no instrumental accompaniment, and so garage bands at every conceivable talent level reasoned that only cranks would be critical of Sunday services enlivened by rock, jazz, and reggae rhythms.

Yet inattention and sloppy theology did not by themselves expand the reach of the power ballad into formal worship. When the folk revival of the Sixties brought “Kumbaya” out from the campfire circle and into the sanctuary, the mavens of mainstream culture noticed, mounting productions of Jesus Christ, Superstar and Godspell to critical acclaim. Christian influence was part of the musical mix of the time, even if only as a foil for other things. Eventually the coming of “arena rock” pushed folk musicians back into Greenwich Village and the coffee house circuit influenced by that iconic neighborhood. As folk music lost ground to rock groups playing for larger audiences, the praise band subculture saw an opening and sprinted for it with instruments in tow. Musicians who had previously played sweltering summer concerts under revival tents realized that they could play in church, which was a better place to gig than anything outdoors because it had air conditioning.

Praise bands took longer to find acceptance in Catholic parishes, but find it they did, when “Guitar Masses” became a chew toy in the perennial argument between traditionalists and progressives. The praise band influence might have been more decisive in the pews had it not been for a pair of distinctively Catholic attributes: First, the doctrine of the real presence of Jesus in the Eucharist emphasizes reverence in Catholic worship to a greater degree than is usually cultivated by Protestant assemblies. Second (and also by design), the Catholic Church is incapable of rapid change. Despite those constraints, praise band and power ballad influence made itself felt.

People who never used works like “immanence” and “transcendence” nevertheless realized that Jesus-among-us thinking had outpaced Jesus-beyond-us thinking, and composers smitten with concepts like “inculturation” and the “spirit of Vatican II” did what they could to shoehorn new music into the liturgy of the church, with decidedly mixed results. What Anthony Esolen once called “the necessary hypocrisy of small talk” was raised to the status of a liturgical act. Meanwhile, among Christians of all confessions, advances in technology spawned by arena rock also created cheap amplifiers that could fill a room with sound.

Architecture was part of the same populist impulse. By the time power ballads entered worship service, narrow naves were outdated. Instead, church designers experimented with forms borrowed from theater-in-the-round, turning what had been Gothic, Baroque, Neo-Classical and even Shaker-inspired construction into Sydney Opera House knockoffs or boxy-looking warehouses. With churches built more wide than high in apparent reparation for the triumphalism of the Middle Ages, it was easy to fit a drum kit and a Hammond organ up near the pulpit. Choirs that had led the congregation from the back moved forward also, but by then the instrumentalists had claimed all the good spots.

Rocking for Jesus was easier than reworking gems like “Holy God We Praise Thy Name.” In self-consciously “seeker friendly” congregations, bias against traditional hymnody was justified on the grounds of meeting potential churchgoers where they were emotionally. That rationale for praise band dominance meant that worship leaders were unwittingly abrogating to themselves an outreach that belonged to the Holy Spirit, but anyone who questioned the bias toward concertizing was more likely to win a sympathetic hearing among “high church” Christians than among people wary of all things liturgical. Even in denominations whose musical patrimony reached back centuries, praise band adherents defended the making of “joyful noise” and the recycling of secular style by noting that King David danced before the Lord. King David’s dance became an argument ender, despite the fact that treating it that way meant overlooking the differences between, for example, a Passover meal and what the Second Book of Samuel describes as an epic procession involving thousands of Israelites who were transporting the Ark of God to Jerusalem.

The developments sketched above emboldened pastors whose emphasis on “relevance” catapulted anything old into the memory bin. Yet the tussle between hymns and power ballads is not now as one-sided as it seemed a few years ago, when I first cobbled a few thoughts on the subject together. Praise bands and power ballads no longer have the last word, because choirs are starting to reclaim lost ground.

Among Catholics, Pope Benedict XVI was instrumental to this reversal of fortunes. As an accomplished pianist with a fondness for Mozart and the other greats of the Western canon, one of the things that Pope Benedict offered in his quietly formidable way was a theological and musical critique of modernity. Leaning perceptively on his 2000 book The Spirit of the Liturgy, Australian theologian Tracey Rowland has written about Pope Benedict’s impatience with “parish tea party liturgies” and “utility music.” Then-Cardinal Ratzinger also decried “the obscuring of the sacred by the operatic” and “the threat of invasion by the virtuoso mentality.” Liturgical music, in his judgment, should “arouse the voice of the cosmos and, by glorifying the creator, elicit the glory of the cosmos itself, making it also glorious, beautiful, habitable and beloved.” This exalted view of liturgical music sits well beyond the emotive range of most power ballads, and it is warmly recommended to the faithful because “Next to the saints, the art which the church has produced is the only real apologia for her history.”

Motivation for excellence has seldom been phrased so pithily. Following that example and the pope’s ringing July 2007 reaffirmation of the continuing validity of the Mass in Latin, Catholic writers are more willing to question the songs on Sunday morning playlists. Jeffrey Tucker wrote about the dangers of catering to musical fads. Marc Barnes regaled readers of his column with “Five Reasons to Kill Christian Music,” by which he meant not the work of Palestrina, but the power ballad dragooned into worship duty. The first reason that Barnes offered was all but unassailable in its logic: writing “Christian” songs has the regrettable effect of reducing Christianity to a modifying adjective. Barnes was also caustic enough to say that “If your music is bad, and you’re praying that God will do something great with it, stop praying and make better music.” On an academic note, the University of Saint Anselmo created a master’s-level course in liturgical music, complete with kind words for Gregorian chant, earlier this year.

It would be foolish to believe that tee shirts have yielded everywhere to choir robes, cruel to suggest that the praise band is going the way of the eight-track tape, and dangerous to forget that mediocre hymns can dilute faith every bit as effectively as Sunday morning trysts between a big voice and Fender Stratocaster. Concert-grade lighting and mixing boards are still part of the worship landscape in larger evangelical congregations. Yet smart pastors no longer shepherd their flocks in terms of equations like “memorable sermon + rocking band = full collection plate,” and for that we can all be thankful. The hymns will rise again, and great power ballads can still be heard when “Needtobreathe” comes to town, or older rockers play to a full house at the casino up the road.

Image: Creative Commons (Frescoes in the choir stalls of the Church of St. Mary the Virgin, Astley, Warwickshire, England)