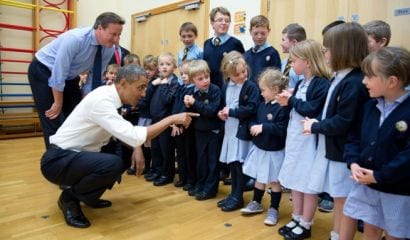 Obama never fails to enlist children in his secularist crusades, whether at home or abroad. Last week he trotted out two nine-year-old girls to introduce him at a White House event celebrating “LGBT Pride Month.”

“We could not be prouder of Zea and Luna for the introduction,” he said. “Zea and Luna are here with their moms, and also I think with Grandma and Grandpa — correct? And so feel free to congratulate them afterwards for their outstanding introduction.”

Zea and Luna proved useful to Obama not only as props for LGBT rights but also as mouthpieces for his gun-control agenda: “When Zea and Luna wrote me last December, they told me they would have voted for me if they could have — thanks, guys. They also laid out quite an agenda. I hope Congress is listening to them. But I want them and all of you to know that I’m not giving up the fight to keep our kids safe from gun violence.”

It just so happens that Zea and Luna also support additional funding for Arne Duncan’s Department of Education. According to Obama, Duncan has lots of innovative ideas on how to jumpstart America’s sluggish schools and needs more money to enact them. Chicagoans may remember one of them: his thwarted plan to start a “gay high school” in the Windy City that he hoped to call “Social Justice Solidarity High School.”

This week Obama took his Brave New World propaganda to the youth of Northern Ireland. He has visions of a secularist utopia for them too. With uniformed school children arrayed behind him, he in effect called for the elimination of religious education in Northern Ireland:

If towns remain divided — if Catholics have their schools and buildings, and Protestants have theirs — if we can’t see ourselves in one another, if fear or resentment are allowed to harden, that encourages division. It discourages cooperation.

Who knows, maybe Obama can lend these benighted schools one of his former education advisers, such as his “Safe Schools” czar Kevin Jennings, who wrote the foreword to Queering Elementary Education. Or maybe he can dispatch Arne Duncan to share his wisdom. After all, Chicago’s schools are such a picture of peace.

Obama’s presumption knows no bounds. The Northern Irish, already enjoying a “chic” culture, as he put it, are evidently capable of his level of enlightenment, provided that they listen to their youth. Apparently referencing his own claimed evolution on gay marriage — recall that he credited his daughters with stimulating his moral imagination by bringing over to the house the adopted children of homosexual couples — he urged Northern Irish youth to keep liberalizing their elders:

Politicians oftentimes follow rather than lead. And so, especially young people helped to push and to prod and to protest, and to make common cause with those who did not look like them. And that transformed America — so that Malia and Sasha’s generation, they have different attitudes about differences and race than mine and certainly different from the generation before that. And each successive generation creates a new space for peace and tolerance and justice and fairness. And while we have work to do in many ways, we have surely become more tolerant and more just, more accepting, more willing to see our diversity in America not as something to fear, but as something to welcome because it’s a source of our national strength.

If the point wasn’t clear enough, Obama said that he hoped that one day they could “fall in love with whomever” they want.

Gay marriage, abortion on demand, free contraceptives, Plan B at the local drug store, an all-pervasive secular culture — this is the glorious future Obama implied for the Northern Irish. But he sternly warned the teens that the choice is theirs: “Whether you let your kids play with kids who attend a different church — that’s your decision.”

For Obama, “peace” and secularism are always one and the same, and if you don’t choose the latter you are a violent bigot. The arrogant Brave New World babble he dumped on these children is impossible to comprehend apart from that assumption. Never mind that plenty of blood, flowing from “chic” addresses like those of his friends at Planned Parenthood, gushes in secularist countries too.

Israel’s first prime minister, David Ben-Gurion, once remarked, “In order for Israel to be counted among the nations of the world, it has to have its own burglars and prostitutes.” In Northern Ireland’s case, pace Obama, it can’t be considered civilized until it has fewer religious schools and more abortionists.