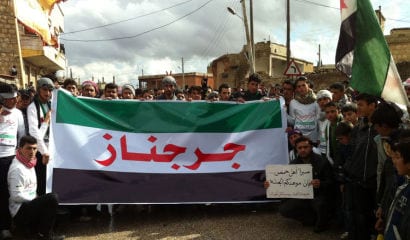 When civil war broke out in Syria, the good guys were easy to spot: They were the soldiers who deserted Bashar Assad’s military after refusing orders to fire on peaceful protesters. But while orders to commit war crimes are as legitimate as any casus belli for armed insurrection, they don’t make for much of a revolutionary political agenda. The task of crafting that agenda has fallen to a government-in-exile that has become dominated by Islamists, notably the Muslim Brotherhood. The main check on the Brotherhood that has emerged in the opposition is backed by Saudi Arabia. There’s a reason the Brotherhood and the Saudis both wave green flags: Their geopolitical agenda may differ somewhat, but they are equally committed to Sunni fundamentalism.

The hope for a truly benign democratic agenda was quashed when the defector-led Free Officers’ Movement was absorbed by the Free Syrian Army, and the latter began giving new brigades names with religious rather than Syrian nationalist symbolism. Even the most secular and pro-Western rebels in Syria now fight, for all intents and purposes, under one green flag or another.

This wasn’t inevitable. Syria isn’t Egypt, where it would be hard to imagine a post-revolutionary political order without significant Muslim Brotherhood influence; while the Egyptian Muslim Brotherhood was thriving as the only real organized opposition to a state that approached them with a mixture of half-hearted suppression and tolerance, the Syrian Muslim Brotherhood was being massacred nearly out of existence. Hafez Assad put down a Brotherhood-led insurrection by killing as many as 40,000 people in the town of Hama, and made membership in the MB punishable by death. But in exile politics, the MB’s relative weakness on the ground in Syria has been less important than the support of regional powers — and the abdication of American leadership.

The Obama administration’s leading-from-behind Syria policy has meant leaving the task of engagement with the opposition to Syria’s regional neighbors like Turkey and (at least until the Saudis recently pushed them aside) Qatar. The Turkish ruling party is ideologically aligned with the MB, and the Qatari royal family has a strategic alliance with the Brotherhood: The Qatari Muslim Brotherhood declared its fealty to the government and disbanded in 1999; in return, Qatar boosts the MB’s soft power across the Arab world by broadcasting supportive Al Jazeera programming, including MB theologian Yusuf al-Qaradawi’s popular show. Small wonder that the MB would end up with an advantage in the political process, which is why Qaradawi has declared a religious obligation to support the jihad against Assad.

Meanwhile, Arab financiers — and a talent for viciousness with the weapons those financiers help supply — have shored up the potency of Jabat al-Nusra, the Salafist extremists who fight under the black flag of al Qaeda. Where others flee (over a million refugees have left Syria), fanantics rush in to fight. A place that has turned into Hell tends to fill with demons.

The Assad regime, for its part, enjoys the unwavering support of its Russian and Iranian allies, and while the troops who remain loyal to Assad have dwindled, Iranian proxies under the yellow flag of Hezbollah, the Shi’ite Army of God, have stepped into the breach. Syria’s future will belong to at least one of three exciting flavors of Islamist.

In 2011, there was an oppotunity to isolate our enemies in Iran, establish a reasonably friendly state, and prevent a humanitarian calamity. In 2013, there is every reason to think that a post-Assad Syrian government will be troublesome at best, and the humanitarian calamity has already happened. So is it worth it to stop the yellow flags — and possible to stop the black flags — by aiding the green flags?

With the announcement of a plan to send small arms to the rebels, the Obama administration seems to have decided that the answer is yes. Perhaps they’re right, but if so, it certainly isn’t for the reason they’re giving.

The new policy is billed as a response to Assad’s use of chemical weapons, which President Obama had set out as a red line — which is to say that this is being framed as a humanitarian mission. But while it’s obvious that the proliferation (as opposed to the use) of chemical weapons is more worrisome than the proliferation of conventional weapons, it’s not obvious why killing a few hundred civilians with chemical weapons is all that much worse from a human rights standpoint than killing tens of thousands of civilians with conventional weapons.

The discomfiting fact is that, in some ways, the abattoir in Syria serves U.S. interests. Assad has recently seemed on the verge of crushing the rebels and scoring a major victory for Tehran, and one can certainly see how it might be preferable the war keep going and draining Iranian resources. But while that might be strategically sound, it’s more or less the opposite of a humanitarian objective.

And what about the black flags? Some have suggested that the Free Syrian Army should go after the extremists. Don’t count on it. Attacking the enemy of your enemy is generally not a popular military strategy. In a post-Assad Syria, the green flags might be opportunistic allies against the terrorists that the U.S. may very well be targeting with drone strikes, but they’re fighting Assad together for now.

That’s why the Obama administration is limiting military aid to small arms. The rebels want heavy weaponry to take out Assad’s aircraft and tanks, but there’s a real risk that control over such weapons would slip from the green flags to the black flags — and someday be turned back at us. Small arms are less likely to turn the tide of the war enough to end it any time soon than they are to turn the tide just enough to prevent the war from ending. The hope that this might provide breathing room for a diplomatic solution in the immediate future is little more than that — a hope.

The U.S. interest in counterproliferation has thus far been taken care of by our most valuable regional ally, via Israeli airstrikes on weapons that could launch chemical payloads (and conventional payloads, for that matter) deep into Israeli territory. The green flags will never be that useful an ally, but they might serve our interest in keeping our enemies in Tehran occupied by fighting the yellow flags, and there’s some possibility that, in the future, they’ll serve our interest in helping to contain the black flags.

But the idea that the Syrian rebellion can still serve our interest in upholding humanitarian norms or spreading liberal democracy? That’s a fantasy.