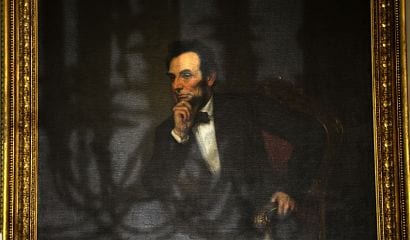 From the time Abraham Lincoln entered the White House nearly a century and a half ago, there has been an anti-Lincoln tradition in American life. President John Tyler’s son, writing in 1932, seemed to speak for a silent minority: “I think he was a bad man,” wrote Lyon Gardiner Tyler, “a man who forced the country into an unnecessary war and conducted it with great inhumanity.”

Throughout his presidency Lincoln was surrounded by rivals, even among his own cabinet. Outside the White House, his many enemies included conservative Whigs, Democrats, northern copperheads and New England abolitionists. Wisconsin editor, Marcus M. Pomeroy, sniped that Lincoln was a “worse tyrant and more inhuman butcher than has existed since the days of Nero.” Shortly before his reelection Pomeroy added: “The man who votes for Lincoln now is a traitor and murderer.… And if he is elected to misgovern for another four years, we trust some bold hand will pierce his heart with dagger point for the public good.” A mild jibe compared to what southern and border state editors and politicians said about the sixteenth president.

With Appomattox and his Good Friday assassination, however, Lincoln’s reputation became unassailable. The few cranks and Lost Causers who continued to moan about Lincoln’s legacy soon died out. Poet Edgar Lee Masters’ Lincoln the Man (1931) was the first sustained literary attack on the Lincoln myth. Masters, who is buried within spitting distance of Abe’s first love Ann Rutledge, accused the oaf Lincoln of having “perverted the Constitution, began a reign of terror, and crushed the principles of free government.” More subtly, the Southern Agrarians painted Lincoln as an early champion of “Yankee capitalism that was omnivorously dissolving all traditional social connections in the cash nexus.”

By mid-century, a few of the New Right conservatives who founded National Review dared to criticize Lincoln, but with the advent of the Civil Rights Movement, he was, once again, elevated to sainthood. Finally, there was the 1981 Mel Bradford kerfuffle, in which Bradford, President Reagan’s nomination to chair the NEH, was blocked by conservatives because of some critical things he said about Lincoln. “You just can’t attack Lincoln and get away with it,” muttered Bradford.

Rather than driving the anti-Lincoln camp back to the fringe, however, Bradford’s case seemed to embolden the anti-Lincolnists. And as the Cold War thawed and foreign separatist movements heated up the time seemed right for rethinkin’ Lincoln.

NOT TO WORRY. THE GREAT EMPANCIPATOR will never be short of defenders, like Lincoln apologist Rich Lowry, editor of National Review, whose recent cover story, “Lincoln Defended,” calls Lincoln’s critics a fringe of left-over agrarians, southern romantics, and people-owning libertarians “who apparently hate federal power more than they abhor slavery.” A cheap shot, certainly, but judging from the growth of the anti-Lincoln press, those left-over agrarians and libertarians are as fanatical in their abhorrence of Abe as Lowry is in his admiration.

Then as now critics objected to Lincoln’s unnecessary war of coercion in which 650,000 soldiers and countless civilians died. In this time of preventable conflicts, Lincoln’s war against the CSA was the bloodiest and arguably most needless military adventure in American history, one fought — not to free slaves, but to crush an independence movement.

Second, disgruntled Americans are reconsidering the idea of secession. Secessionist movements are finding fertile soil from Vermont to Alaska. Because the nation was founded upon a revolution, no one disputes a natural right to revolt; why then is the right to peacefully secede considered unconstitutional? Only because Lincoln established the precedent that if any state secedes it will be invaded, pillaged, and burned to the ground. The nation’s “perpetuity is implied, if not expressed, in the fundamental law of all national governments,” Lincoln insisted.

Third, there was the illegal way Lincoln conducted his war: refusing to trade prisoners, seizing civilians’ guns, shutting down newspapers, waging total war against civilians, arresting rival politicians, expanding the military and appropriating funds without Congressional approval, and illegally suspending habeas corpus. All of this bears an eerie resemblance to the abuses that have occurred in America’s recent wars, i.e., torture, trial without jury, drone attacks on civilians, and wiretapping phones.

Fourth, it was during Lincoln’s presidency that power shifted radically from the states to Washington, D.C. and Wall Street. The federal government always grows like a weed during wartime, but it has seldom expanded like it did during Lincoln’s tenure. Today, with the U.S. waging permanent war against terrorists, and human rights abusers like the Libyan and Syrian regimes, and talking pre-emptive war with Iran, our governors and state legislatures will be taking on a progressively ceremonial role.

Fifth, Lincoln began the campaign to Northernize the South. Everything unique about the traditional Southern way of life was stamped out by the anti-Jeffersonian Lincoln: its simpler, agrarian tradition, its anti-industrialism, and its disdain of the North’s Philistine materialism. With the airing of south of the Mason-Dixon shows like “Here Comes Honey Boo Boo,” many Americans are beginning to realize just what was lost.

Mr. Lowry’s cover story was a rather ineffective opening statement for Lincoln’s defense. Perhaps he does better in his new book. Meanwhile the damning evidence continues to pile up.