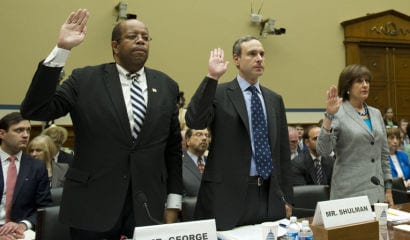 Our government appears out of control. Worse, our various political biases aren’t letting us see the big picture. House committees recently held hearings featuring IRS officials and leaders of six organizations whose applications for tax-exempt status were stalled by the IRS. The committee members were clearly split on the seriousness of the case, with Republicans decrying the IRS’s actions and Democrats tending to brush it all aside as simply managerial incompetence.

We can’t let this devolve into a purely political issue. This is not a matter of Republicans against Democrats. Viewing it that way overlooks the real issue, which affects all Americans, regardless of political affiliation: an agency drunk on power and devoid of common sense. We shake our heads at foolish IRS spending on lavish conferences with a Star Trek parody video, spending $17,000 on an artist speaker, and unnecessary commissions to outside event planners. Then we recently learned that over 200 IRS employees are paid by taxpayers to work full time for the union representing IRS employees. And this is not unique to the IRS.

Our Congress keeps passing new laws, like Obamacare, giving more power to the IRS and other agencies. And as the power of the IRS and other agencies grows, they become less accountable. President Obama has said before on other issues that the buck stops with him as our nation’s leader. But what this really means is no one is held responsible when the government and its agencies are implicated in scandals. Now we know that for more than 18 months beginning in 2010, the IRS targeted certain groups that applied for 501(c)(4) status. If the facts reveal these groups were indeed selected because of their beliefs, then this is un-American and unacceptable. Yet no one at the IRS will claim responsibility. In fact, Lois Lerner, the director of the division on tax-exempt organizations, pleaded the Fifth and refused to testify to Congress about what happened.

Sen. Lindsey Graham (R-S.C.) has called the IRS scandal “Obama’s Watergate.” But before we start making wild accusations and claiming this is a clear case of a liberal president attacking conservative Americans, we should remember that inappropriate IRS reviews occurred under President George W. Bush. Then, the IRS targeted liberal groups, including the NAACP and Greenpeace. Even in the present case, it’s not clear that all the groups targeted were conservative; in fact, it appears that at least 48 of the groups were not.

Treating the current IRS scandal as a political issue blinds us to the deeper problem. Worse, it divides the American people. Democrats and Republicans and people of all political stripes should be united in their outrage and should work together to get to the bottom of this governmental abuse of power. The federal government is chock full of agencies that waste taxpayer money and quietly assume control over our daily lives through arbitrary enforcement and ever increasing regulation. Usually this happens behind closed doors, away from public view. Over the years, I have heard from friends that the IRS was auditing them personally because of their political views and campaign contributions. I used to think they were paranoid. Now I wonder.

Bureaucrats with axes to grind have brought a series of seemingly absurd enforcement actions against our best American companies over the past few years. This goes against American values of common sense, fairness and a good use of government resources. Some examples:

The IRS scandals are just more visible examples of a government out of control. Our government is too big, too unaccountable and uses ambiguous laws that give regulators too much authority. We need to put a stop to it once and for all.

First, we have to peel off the political blinders that keep us mired in our national difficulties. Already there are movements across the country seeking to stop the political wrangling that keeps us in perpetual gridlock. No Labels is a great example of an organization that unites Democrats, Republicans and anyone else in an effort to stop the fighting and get down to fixing the problems in our nation.

Right now, the danger America faces is far greater than any conspiracy theory about one political party bullying the other. That danger is an ever-expanding federal government that continues to assume powers it should not have. The IRS’s inappropriate actions should be a warning to all Americans, regardless of political affiliation: a government with too much power threatens all of us. That is the real issue, and it has nothing to do with right or left.