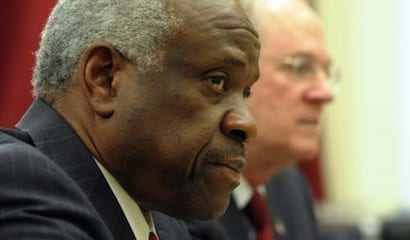 The Supreme Court opinion everyone is buzzing about — Monday’s decision in Fisher v. University of Texas at Austin, a case involving that school’s affirmative action program — will not be monumental in our canons of jurisprudence.

The petitioner, Abigail Noel Fisher, a young white woman, applied to the university in 2008 and was denied admission. She challenged the decision, arguing that she would have been admitted under a colorblind system. The high court has now remanded the case back to the Fifth Circuit, holding that the lower court failed to properly ascertain whether the affirmative action program was the most narrowly tailored means to achieve the university’s diversity goal. In legal terms, the Fifth Circuit had failed to subject the program to “strict scrutiny.” Thus, additional litigation lies ahead; the case is not even over.

What will be remembered from Monday’s proceedings, though, is Justice Thomas’ concurrence, which treats affirmative action as paternalism — a word he implies but doesn’t use explicitly, at least not here.

The dichotomies “liberal” versus “conservative,” “left” versus “right,” complicate rather than clarify issues such as affirmative action. A better choice of words, if a dichotomy must be maintained, is “paternalism” versus “non-paternalism.” Viewing diversity in this light, as Justice Thomas does, enables us to understand and appreciate the forms that racism and discrimination take.

Those forms often are paternalistic: Person A assumes to understand the plight of person X and undertakes to care for and control him as a father would his children. Even if X were one day to achieve relative equality with A in real terms — opportunity, education, earning capacity — this dominance would persist so long as A views X as a needy inferior, and so long as X allows that presumption to persist.

Thomas’s concurrence places such toxic ideas under a microscope, and exposes the ironic double standards of those who resort to paternalism. For instance, the bulk of his concurrence describes how the university’s arguments in favor of affirmative action are the same or substantially similar to those once used to justify racial segregation and even slavery. “There is no principled distinction,” Thomas writes, “between the University’s assertion that diversity yields educational benefits and the segregationists’ assertion that segregation yielded those same benefits.”

Likewise, he adds, “Slaveholders argued that slavery was a ‘positive good’ that civilized Blacks and elevated them in every dimension of life.” Advocates of slavery and segregationists both argued, in other words, that their policies bettered the conditions of Blacks and minimized racial hostility on the whole. The form of these racist arguments is now being used to justify state discrimination through affirmative action programs.

The segregationists argued that integrated public schools would suffer from white flight; proponents of affirmative action argue that universities will suffer from a lack of diversity if discrimination is not allowed.

The segregationists argued that blacks would become the victims of desegregation once white children withdrew from public schools en masse and that separate but equal schools improved interracial relations; proponents of affirmative action likewise argue that minorities will be the victims if affirmative action programs are deemed unconstitutional and that diversity on campus improves interracial relations.

The segregationists argued that although separate but equal schools were not a perfect remedy for racial animosity, such schools were nevertheless a practical step in the right direction; proponents of affirmative action likewise argue that it, although not ideal, nevertheless generates race consciousness among students.

He should not be misunderstood as equating affirmative action with the discrimination unleashed upon blacks and other minorities throughout American history. Although he acknowledges that affirmative action does harm whites and Asians, he is chiefly concerned with how such discrimination harms its intended beneficiaries: above all, blacks and Hispanics. “Although cloaked in good intentions,” Thomas submits, “the University’s racial tinkering harms the very people it claims to be helping.” He adds that “the University would have us believe that its discrimination is…benign. I think the lesson of history is clear enough: Racial discrimination is never benign.”

Why aren’t affirmative action programs — which Justice Thomas at one point refers to as “racial engineering” — benign? He gives several reasons: They admit blacks and Hispanics who aren’t as prepared for college as white and Asian students; they do not ensure that blacks and Hispanics close the learning gap during their time in college; they do not increase the overall number of blacks and Hispanics who attend college; and they encourage unqualified applicants to graduate from great schools as mediocre students instead of good schools as exceptional students. Moreover, Justice Thomas cites studies showing that minorities interested in science and engineering are more likely to choose different paths when they are forced to compete with other students in those disciplines at elite universities. What Justice Thomas considers most damning of all, however, is the “badge of inferiority” stamped on racial minorities as a result of affirmative action.

Just one small personal example: When I was in law school, a few of the guys in my study group began comparing professors, as students do regularly, and they were quite open in their opinion that our black professor could not have been as intelligent, because she had benefited from affirmative action programs.

I never studied with that group again, and it wasn’t until the next semester, when I took Constitutional Law, that I read Justice Thomas’ concurrence in Adarand Constructors, Inc. v. Pena, in which he wrote, “So-called ‘benign’ discrimination teaches many that because of chronic and apparently immutable handicaps, minorities cannot compete with them without their patronizing indulgence. Inevitably, such programs engender attitudes of superiority or, alternatively, provoke resentment among those who believe that they have been wronged by the government’s use of race.” My study group experience validated these words in an unforgettable way. (It bears noting that Justice Thomas does use the term “paternalism” in this concurrence.)

Thomas indicates in Fisher that the “worst forms of racial discrimination in this Nation have always been accompanied by straight-faced representations that discrimination helped minorities.” One wonders to what extent the intended benevolence of affirmative action programs has perpetuated racial tension and inequality in this country. One wonders how long universities will continue such programs that, in essence, tell white applicants, “You are better than your minority peers.” Perhaps we will not know the answer in our lifetimes. It can take generations for the ideas of one era to be suitably evaluated for their morality or utility.

For now it’s safe to say, à la Thomas, that the “Constitution does not pander to faddish theories about whether race mixing is in the public interest,” that the “Equal Protection Clause strips States of all authority to use race as a factor in providing education,” and that all “applicants must be treated equally under the law, and no benefit in the eye of the beholder can justify racial discrimination.”