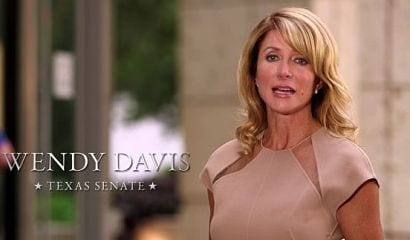 In ancient Sparta, any newborn judged abnormal by the council of elders was exposed to the elements. The parents were required to desert the baby in the wild, where thirst, hunger, extreme temperatures or predators would kill the unacceptable infant. Today’s typical feminist, in the unlikely event that she were sufficiently literate in ancient history to know of this barbaric practice, would probably denounce it as an inevitable artifact of a militaristic, patriarchal society. And yet she would, along with most progressives, ferociously defend a remarkably similar modern barbarity — late-term abortion.

We have just witnessed an example of this tragic irony, as Aristotle might characterize it, in last week’s filibuster staged on the floor of the Texas Senate. A headline-seeking Democrat named Wendy Davis stood for 13 hours in the middle of that hapless body of legislators, parroting the faux feminist platitudes we have so often heard from the abortion cult, in an effort to kill a bill that would ban abortions for women whose pregnancies have advanced beyond 20 weeks and require abortion clinics to maintain widely accepted clinical standards. Such “Draconian” measures, she charged, were “anti-woman.”

Davis would, of course, reject my conflation of Sparta’s gruesome tradition of infanticide and late-term abortion, but the parallels are inescapable. The only significant difference involves the breathtaking hypocrisy of the pro-abortion zealots and the Democrats who pander to them. In Sparta, neither the parents nor the elders were cowardly enough to pretend, as do our progressives and politicians, that they were somehow doing the child a favor by exposing it. Nor did they resort to semantics to maintain the fiction that their victims weren’t human beings. They killed babies and didn’t delude themselves about it.

If you are tempted to rebut this by claiming that the Spartans killed live infants while an abortion is performed on an unborn “fetus,” I would refer you to Alisa LaPolt Snow. She argued last March for post-birth abortion rights, saying that the fate of a child born alive during a botched abortion “should be left up to the woman, her family, and the physician.” You should also listen to this exchange between a Planned Parenthood ghoul and a young pro-life activist posing as an abortion customer, in which the former explains that late-term abortions are frequently handled by inducing delivery and allowing the baby to die on the table.

And, make no mistake, it is this sort of atrocity that Wendy Davis is really defending. She, however, claims to be protecting women from Republican bullies like the evil Rick Perry. Yesterday morning, demonstrating something of a genius for projection, she made the following assertion on Face the Nation: “I think really what’s happening here… is politicians are using this issue to boost their own political aspirations, their own political positions.” Davis went on to insinuate that the bill she filibustered flouts the will of the people and that the Texas GOP will reap the political whirlwind if they succeed in passing it.

This is an example of the unintentional irony for which Davis also has a marked talent. It is she and the abortion mongers who have ignored the voice of the people. Shane Goldmacher provides the facts in National Journal: “The latest United Technologies/National Journal Congressional Connection Poll shows that a plurality of Americans supports a ban on late abortions.” Even worse for Davis is what this survey reveals about respondents of her own gender: “The poll, notably, showed that women supported such a measure in greater numbers than men (50 percent of women in favor; 46 percent of men).”

And Davis’s position is not merely at odds with Americans in general, and American women in particular, she is swimming against the international tide as well. As Melinda Henneberger writes in the Washington Post, “The Texas law is not unlike legislation on the books all over Western Europe, where late-term abortions are rightly considered barbaric.” Peggy Noonan reiterated that point on ABC yesterday morning: “She is speaking for and standing for something we recognize as infanticide, late-term abortion, the taking of a little child’s life… something that even in Europe they call a matter of brutality and barbarism.”

Nonetheless, Davis has certainly accomplished her obvious goal. Last week this time, she was a virtually unknown member of the minority party in a state legislature that meets every other year. Today, she is a national celebrity. She is particularly beloved of the establishment “news” media, which have treated her as if she were a combination of Joan of Arc, Susan B. Anthony and Lady Diana. And this exposure may be enough to get her to Washington. Unfortunately, on late-term abortion, Davis and the Democrat party are once again on the wrong side of history, just as they were on the slavery question.

Oddly enough, that brings us back to the Spartans. In addition to sharing the Democrat affinity for infanticide, they too were champions of human bondage. The Democrats have been adaptable, however. They eventually learned to live without slavery, and they had better learn to live without the cult of death. No amount of rhetoric about “reproductive rights” will reconcile them with the growing number of Americans, many in constituencies without which they cannot survive, who view late-term abortion with disgust. If they continue to embrace shrill demagogues like Wendy Davis their recent successes may well be short-lived indeed.