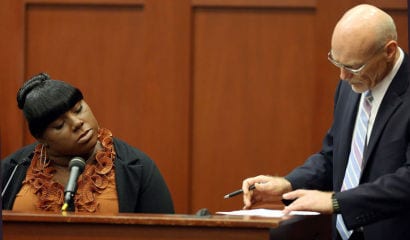 “A lot of people think Black English is just bad grammar, but that’s like saying that a cocker spaniel is a bad kind of Saint Bernard…” — Columbia University Associate Professor of Linguistics John McWhorter

It’s true: some people on Twitter criticized last week’s courtroom testimony of Rachel Jeantel, a friend of Trayvon Martin’s who was speaking with Mr. Martin shortly before he died in a fight with George Zimmerman on the evening of February 26, 2012.

Most of the criticism was about the content of her testimony and her aggressive behavior when being cross-examined, saying “Yes, sir” with dripping antipathy about two dozen times. Some others criticized her manner of speaking, namely what Professor McWhorter calls “Black English,” though pushback against those people in the Twitterverse was relentless, and Ms. Jeantel’s supporters seemed to at least match her critics in quantity of social media activity with notes such as “Rachel Jeantel hold your head Babygirl…” (from a gentleman named Ghostface Killah, a rapper and member of the Wu-Tang Clan, who has nearly 450,000 Twitter followers.)

If Ms. Jeantel was telling the truth, she can indeed hold her head high. But that doesn’t make the questions raised by “Black English” go away.

These questions are not new. James Baldwin (1924-1987), a prominent black novelist, playwright, and poet, whose most famous works were written as social commentary during the civil rights movement of the 1950s and 1960s, penned an essay for the New York Times in 1979 entitled “If Black English Isn’t a Language, Then Tell Me, What Is?”

It is a remarkable read, straight-forward in its explanations (which also function as excuses, at least in the context of a reader more than 30 years later), suggesting that Black English differs from ordinary English in the same way that the French spoken in Paris differs from that spoken in Marseilles or Quebec.

Baldwin posits that Black English was useful when he was a child because a family member could “convey to me…the danger in which I was standing from the white man standing behind me, and to convey this with a speed, and in a language, that the white man could not possibly understand…”

Putting aside the sad fact that such a view of life was not unrealistic for many American blacks just two generations ago, maintaining the view today that “Black English” should be valued for its incomprehensibility to many whites or, as Baldwin also suggests, for its history of formation “within the unprecedented tabernacle” of the black church, or for its contributions to the American English vernacular, does a tremendous disservice to America’s black population, including Rachel Jeantel.

The Parisian Frenchman is unlikely to be unemployable in Quebec; a Scotsman could probably get a job in London.

But what is the future for 19-year-old Ms. Jeantel (or others who speak, if you will, “blacker” English than she does) when they attempt to enter the workforce? After all, in most jobs an ability to communicate with customers and colleagues is of the utmost importance. Yet there are few jobs — and extremely few with excellent long-term prospects — in which the large majority of co-workers and customers speak Black English. If you ever want to get out of your neighborhood McDonald’s or Walmart, it helps to speak English.

For a variety of reasons, whether we like it or not, speaking only Spanish in the United States seems less of an impediment to at least a modestly successful life than speaking “Black English.” In the most recent data release from the U.S. Department of Labor, Hispanic unemployment in the U.S. was 9.1 percent whereas among blacks, the rate is 13.5 percent, a number which masks the devastating rate of roughly 40 percent among 16- to 19-year-old blacks. Among blacks, whites, and Hispanics, it is only blacks whose unemployment rate is essentially unchanged from a year ago.

The black population of America, at 13.1 of the country, is about 80 percent the size of the Hispanic population, at 16.7 percent of the population. Yet (and this probably has a lot to do with immigration status but remains an important marker), 40 percent of welfare recipients are black, versus 16 percent who are Hispanic.

Something is not working for American blacks. Whether Black English is a cause or an effect — or most likely both — is an important question for the future of an eighth of the nation’s population — a group that is also burdened by functionally racist government policies such as the rise of the welfare state, the failed “war on drugs,” and Democratic hatred of school choice.

Could some of the failure of blacks to succeed in the workforce be due to racism within American society? Sure it could. But when so many young blacks refuse to speak English because they don’t want to “seem white,” it is difficult for whites to respond by saying “OK, you’re hired.” Whatever the reasons may be for Hispanics in the United States not learning English, being afraid of seeming white is probably not on the list.

It is not just that someone who speaks Black English (exclusively) is likely to be less qualified for almost any job than someone who speaks American English, but, at least for this white guy, I have to wonder whether the person speaks the way he speaks because he is a victim of government schools or because he buys into a new black version of “separate but equal” — which is of course far more separate than equal — but this time by blacks’ own doing.

In the latter case, the person is, even aside from any communications difficulties, unlikely to be someone an employer (who isn’t black) would implicitly count on as a team player — after all, the potential employee begins the conversation leaving an open question of whether she considers herself part of the same society as the prospective boss, hardly a strong foundation on which to build a business.

As Chris Andreas put it memorably in a video which I’d hope many black youth would watch, “race is not a sound.” So why should a race have to sound a certain way to maintain its traditions, its pride, its identity?

Or as Stacy Swimp of the black conservative organization Project 21 put it, Ms. Jeantel’s demeanor and language during her court testimony were “a clear manifestation of the cultural perversions that are normalized throughout many of our urban communities.” Rather than just be angry, Ms. Swimp offers a constructive suggestion: “I pray many of my conservative peers will be motivated by what I saw, to go and sign up to be mentors to young girls like Ms. Jeantel, to help them grow in literacy and personal dignity.”

But how are we to have a real discussion about Black English and its impact — which I perceive as dramatically negative — on American blacks, how are we to get black youth to accept mentoring from people who “speak white,” when prominent black leaders and academics such as Professor McWhorter argue, as he did, that Rachel Jeantel, in her barely understandable black vernacular, is “laboring under (a situation in which) black is less human in the eyes of many people.”?

According to McWhorter, to question the value of a behavior or characteristic of a group is implicitly to see members of the group as “less human.” This is a remarkably racist (anti-white) statement in its own right, one made without any foundation in evidence in 21st-century America.

My guess: John McWhorter would rather have an area of academic study and publishing available to him, even if it means keeping poor people poor, keeping desperate families desperate, and keeping separate communities separate.

McWhorter claims that Ms. Jeantel is “speaking a very interesting, very dynamic form of English, and she’s speaking it very well.” He reminds me of supercilious academics everywhere for whom there is no such thing as right or wrong, no such thing as good or bad, but only relativism in which as long as anyone believes something, it is to be as valued as much as anything else anyone else believes. But some beliefs and behaviors are more harmful than others, and therefore are less good, less moral than others, at least to the extent that morality argues for behaviors that improve people’s lives.

An academic may see Black English as an equally valid language. Most of the rest of society sees it as a ball-and-chain whose wearers have attached it to their own ankles, who come in last in the race of life while asking onlookers to appreciate their eclectic fashion accessory.

With black “leaders” like John McWhorter (who, for the record, has come out in support of Paula Deen keeping her job and who is a contributing editor to the Manhattan Institute’s City Journal, one of the best conservative publications in America) demonizing reasonable discussion of Black English, a “language” that arguably does great damage to black people to the extent that they speak it instead of American English, we have just the latest example of blacks preventing the improvement of black life in America by making excuses and blaming others for their lack of success.

And if all that isn’t enough, Ms. Jeantel also told the world last week “I don’t read cursive.”

When Rachel Jeantel and the millions of young blacks like her get through our pathetic excuse for a public education system without being able to effectively communicate with a majority of Americans, it’s not only blacks who suffer, though they have the worst of it. A near-permanent sub-class is a moral stain and economic and political burden for any nation.

But the real moral stain is on those who, by casting aspersions on well-meaning citizens asking for an honest discussion about the nation’s future, keep their own people in a state of finger-pointing denial, failure, and poverty.