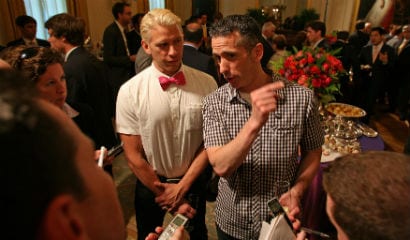 A number of things about American Savage: Insights, Slights, and Fights on Faith, Sex, Love, and Politics, Dan Savage’s most recent collection of opinion columns, annoyed me before I began the first chapter. First there’s that ten-word subtitle, which, like most taglines affixed to nonfiction books these days, is both long and uninformative. Syntax is a problem here too: one can offer “insight” (though not “insights”) on x, one can, I suppose, observe “slights” on y (though slights against y would be more idiomatic); but one cannot participate in “fights” on anything save some kind of physical surface—a sturdy table, say, or a ringing plain. Grammar has been sacrificed on the altar of infantile rhyme.

Turning the book over, one finds on the back cover a blurb from from NPR’s Ira Glass: “I think America would be a better place if everyone on every side of the gay marriage debate would read this book [i.e., The Commitment, a previous Savage title]. Dan Savage defies all known stereotypes and arguments over gay marriage by actually documenting what happened in his own life.” If there is an argument there—and despite Glass’s characteristic sanguinity I think there probably is one—it’s one that might be expressed as follows:

1) Dan Savage is one man among some 300 million Americans.
2) Savage, who is gay, has had certain singular experiences.
3) Ergo, Savage’s writings should be consulted when questions of public policy are decided.

Worse than Savage’s sin against usage or Glass’s perforated syllogism, though, is the author’s attempt to enlist the aid of A.E. Housman. Here is the epigraph to American Savage:

And if my ways are not as theirs
Let them mind their own affairs.
Their deeds I judge and much condemn,
Yet when did I make laws for them?

Don’t know about you, but if I were asked by my publisher to pick out an epigraph for a book of mine, I’d select it from something I’d actually read at least once in its entirety. Nothing here suggests that Savage or his agent or his editor has any idea what Housman poem these lines come from. Its placement sans title (or rather number—it’s the twelfth of Housman’s Last Poems) smacks of Quotes.com or some such philistine repository. This is not to suggest that I don’t understand why the epigraph, however discovered, was chosen. A.E. Housman was gay, you see. Unfortunately, Housman (himself an unbeliever in the robust English tradition of Bolingbroke, Hume, Darwin, and Attlee) was making rather the opposite point, as the rest of the poem makes clear:

And since, my soul, we cannot fly
To Saturn nor to Mercury,
Keep we must, if keep we can,
These foreign laws of God and man [emphasis added—MW].

Duty, honor, fidelity, decency, etc., are necessarily “foreign,” which is to say, not automatic or instinctual or (to be sure) easy to achieve. Morality wouldn’t be morality if it meant throwing up our hands and saying, “Whatever.”

All of this comes, mind you, before we get to chapter one. I tried hard to make it through all 280 subsequent pages (not including notes, nearly all of which refer the reader to URLs rather than page numbers) of American Savage. I really did. But then I kept running into sentences like this one:

It was almost as if Rick Santorum were avoiding me.

(The decline of le subjonctif is a sad, sad thing to witness; but sadder yet is seeing it rudely handled by someone like Savage, who doesn’t know how to use it but clearly feels like he ought to.)

Or poor argumentation of this variety:

A single-payer system means not having to worry about medical bills, or going bankrupt, or losing your home, if you or your child should get sick or injured, or if your baby is born prematurely.

(It also means having to worry about the long-term financial solvency of the country, not to mention being forced to implement a severely restrictivist immigration policy: the latter presumably not something on which Savage is very keen.)

It’s all well and good for a narcissistic hedonist like Savage to argue that agreeing about homosexuality with 100% of the Church Fathers is tantamount to hatred of all gay people or that adultery (philandery? infidelity? I’m straining after a noun that smacks less of the Abrahamically backward) is A-OK. But it is, I think, unfair to all but libel the poor put-upon culture warriors at the Family Research Council (an “anti-gay hate group”: who knew?) or to conflate Herman Cain’s contention that men and women choose to engage in homosexual activity with the view, always heavier weather at Salon than in Alabama saloons, that President Obama was born in Kenya.

Perhaps I shouldn’t be so hard on him. Savage has probably written more books than he’s read, so one cannot fully fault him for his prose’s shortcomings. Sure, it’s bitchy (“Sally Kern is one of America’s lesser bigots”) and fragmented (“Exactly” is not only a typical Savage sentence, it’s also a typical Savage paragraph) and so utterly divorced from the rhythm and syntax of actual written English (“Bi men? Nope, no way, not feeling it”) that reading it is like listening to “Happy Birthday” sung by a tone-deaf boys’ choir whose every member has a severe case of strep throat. Clearly Savage can’t, or won’t, help it.

“[T]hought,” who else but A.E. Housman wrote in the introduction to his edition of Juevenal’s Satires, “is irksome and three minutes is a long time.” It would take about three minutes to explain to Savage why, for example, he is wrong about the Roman Catholic Church’s position on women in the priesthood; but three minutes is probably longer than it takes Savage to compose most of his paragraphs. In the end I’d say I read around 75% of American Savage, 60,000 words or so. A solid C for me, then: not especially worthy of commendation, to be sure, but much further than Savage seems to have made it into that Housman poem. Fair enough, then.