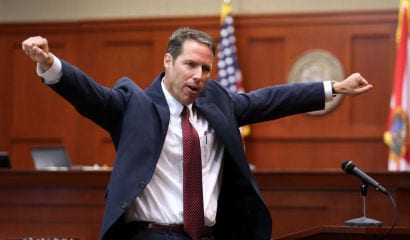 In televised trials, it is usually the defense attorneys who resort to hyperbole and bluster. But in George Zimmerman’s case, it is the prosecutors. They have no facts, so they are shamefully pounding on the table. “George Zimmerman did not shoot Trayvon Martin because he had to,” said prosecutor John Guy in his opening presentation. “He shot him for the worst of all reasons — because he wanted to.”

Nothing even remotely approaching proof has substantiated this claim, which looks, as each day of the trial passes, more and more like a despicable lie, probably worthy of a disbarment or two in the Seminole County prosecutor’s office.

Only in a sloppy, politically correct culture, where evidentiary standards are routinely blurred in the name of this or that liberationist goal, could this case have been brought. Media commentators in the tank for the prosecution praised Guy for his “concise” opener, failing to acknowledge why it was short: he’s got very little to work with. Guy spent most of his time fuming over what Zimmerman had said in the infamous 911 call, as if the quality of Zimmerman’s thoughts about “f—king punks” is the subject of the trial and itself worthy of punishment for decades in prison.

Each time the prosecution circles back to that phrase they give it greater dramatic emphasis, hoping that that will somehow fill the jury with such hatred for Zimmerman that they won’t bother to weigh actual evidence. These pathetic histrionics led one of Zimmerman’s attorneys to ask a prosecution witness if Zimmerman had said “f—king punks” with the same menacing intonation as the prosecutors. The witness said no.

Had the prosecution restricted itself to a manslaughter charge, the case might be a little more interesting. But even there proof is lacking. A key eyewitness in the case, Jonathan Good, has confirmed a central element in Zimmerman’s self-defense explanation for the shooting. Good had initially told police that he saw Martin on top of Zimmerman, striking him: “It was a black man with a black hoodie on top of the other, either a white guy or now I found out I think it was a Hispanic guy with a red sweatshirt on the ground yelling out help!” Nothing Good said at the trial last week changes this account.

In the face of inconvenient testimony like that, all the prosecution can do is repeat over and over again in a faux-outraged tone that Zimmerman “followed” Martin. But even if one granted the prosecution’s unconvincingly sinister interpretation of that scenario, “following” a person is not a crime, much less evidence for second-degree murder. Moreover, why would a neighborhood watch representative call 911 before committing second-degree murder? That makes no sense.

Nor has the prosecution provided any evidence that Zimmerman was the “aggressor” in the confrontation. It is evidently hoping that a hate-crime theory will substitute for evidence. The prosecution’s chief witness, Rachel Jeantel (who was on the phone with Martin before the altercation started), acknowledged to the defense that she didn’t know who initiated it. Zimmerman says Martin jumped out of the bushes at him, said “What the f—k is your problem, homey?” and then started throwing punches. If anything, Jeantel’s testimony to Martin’s frame of mind before the fight — he told her a “creep-ass cracker” was following him — lends credence to Zimmerman’s account. So, too, do the wounds on his body and the wounds on Martin’s hand.

This week a detective in the case, Chris Serino, testified that he tried to fake Zimmerman out in the post-incident questioning by suggesting that the fight might have been videotaped. Zimmerman expressed relief at that prospect, according to the detective: “I believe his words were, ‘Thank God. I was hoping somebody would have videotaped it.’” Does that sound like the response of somebody who has just committed second-degree murder?

The prosecution continued to flail on Tuesday, reduced not to disproving the existence of Zimmerman’s self-defense wounds but to claiming that they were overstated. Even if true, who cares? How is that decisive for a second-degree murder conviction? A perceptive jury would ask prosecutors who claimed so confidently at the beginning of the case that Zimmerman “wanted to” kill Martin why this supposedly depraved murderer had any gashes on his head at all.