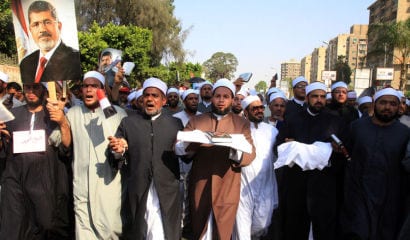 The Wednesday coup that overthrew Mohamed Morsi’s Egyptian regime is of considerable significance, but not of the kind that has been lavished on it by the media. Too many reporters and commentators have taken the coup as a sign of Egypt’s rejection of the Islamists’ hold on that nation and others have compounded that mistake by projecting the supposed rejection of Islamism to other Middle Eastern nations.

The coup wasn’t a rejection of Islamism or even of the Muslim Brotherhood, Islamism’s machine in Egypt. It was about food and about which band of Islamists — the Army or the Brotherhood — rules Egypt in coming years.

Morsi was not just a Muslim Brotherhood thug but an incompetent one. As my friend David Goldman writes, starvation was the unstated reason for the coup. Under Morsi’s mismanagement, Egypt’s economy has faltered badly. For months, the bottom half of the population has had little to eat other than government-subsidized bread and the supply of that is threatened by a wheat shortage. Perhaps, with the assistance of Saudi Arabia and Qatar, the Egyptian military can alleviate the food shortage. If it cannot, the military’s control will falter and Egypt’s future will be even more uncertain.

The other reason for the coup is the Egyptian military’s still-strong opposition to the Muslim Brotherhood, which goes back at least a half-century.

Gamel Abdel Nasser’s military group overthrew the Egyptian monarchy in 1952, but Nasser remained a shadowy figure. When a fanatic tried to assassinate him in 1954 — and the man confessed to having been under orders from the Muslim Brotherhood — Nasser emerged as the only real power in Egypt and promptly cracked down on the Brotherhood.

The Egyptian military is not, though, a secular force. Its commanders are as dedicated to Islamist ideology as Morsi. But the Army-vs.-Brotherhood struggle has become very confused. On one hand, Morsi had planted many of the Brotherhood’s loyalists in top military ranks. On the other, the military has arrested a number of the Brotherhood’s leaders and has closed several Islamist television stations that had supported Morsi.

So, as one headline asked, who lost the people of Egypt? No one, because we didn’t have them to lose. In truth, it’s entirely questionable that the Egyptian people have much to say in the matter themselves. There are still demonstrations and riots, some of the participants in them demanding Morsi’s return to power. Do we cut off aid, as our law requires, because of the coup?

We should cut off aid but not because of the coup. Obama decided to give Morsi’s government some twenty new F-16s, tanks, and other assets. Arming the Muslim Brotherhood was a bad idea then. Arming the Egyptian military which, much like the mafia, regards Egypt’s economy as its own business is just as bad an idea now.

Now, when pro-Morsi rioters are in the streets, is the wrong time for any aid. By denying aid, we can put a bigger burden on the Saudis and Qataris to stabilize Egypt without aiding a letting it slip into the Muslim Brotherhood’s hands again.

Sen. Jack Reed (D-RI) proclaimed yesterday that we need to insist that the Egyptian military move quickly, on a definite timeline, to another round of democratic elections. Reed is comprehensively wrong, and that can be demonstrated on two grounds.

First and foremost is the fact that President Obama has deliberately surrendered America’s influence in the world. Both our allies and our enemies understand that he doesn’t believe we should be a superpower any longer. They are eager to accommodate that ambition. Because Obama has done this so well, we no longer have the standing to insist that the Egyptian military do anything.

Obama absented himself from any attempt to influence the outcome in Egypt and his secretary of state was apparently aboard his yacht for some period during the coup, equally oblivious.

It was only after the coup that Obama — and the Washington Post — sought to influence the outcome. Both sided with “inclusiveness” which means, in this case, ensuring that the Muslim Brotherhood and other Islamists be included in the post-Morsi government. Which brings us to the second reason that Reed was completely wrong.

To insist on elections is not the same thing as to insist on freedom or democracy. There were more than enough allegations of fraud in Morsi’s election to question its legitimacy. Perhaps the Muslim Brotherhood understood Stalin’s maxim that it’s not who votes that matters: it matters who counts the votes.

Elections can be one of the most important foundations of freedom or they can be a façade concealing despotism. Unless we retain the ability to tell the difference between the two — and in places such as Egypt we have not demonstrated that ability — we have no basis to determine whether a government chosen in an election is one we should support or oppose. An “elected” government isn’t necessarily our freedom-loving friend, and the government resulting from a coup isn’t necessarily a despotic oppressor.

Egypt, however, gave us two bad results. Morsi’s election wasn’t — and the possible choice of Mohamed ElBaradei isn’t — in America’s interests. Morsi’s Muslim Brotherhood government was “elected,” and committed by the Brotherhood’s ideology to enmity with us and our allies. ElBaradei could have been imposed — and may yet be — by the military after the coup. But he’s no friend of the United States. He has his own strong connections to the Muslim Brotherhood. As head of the UN’s International Atomic Energy Agency, ElBaradei was the principal apologist for Iran. Under his leadership, the IAEA gave Iran the benefit of more than a decade of unhindered development of nuclear weapons.

Whether ElBaradei is yet named Egypt’s interim leader is uncertain, but the pro-Morsi protesters — who have been violent at times — are more likely to bring about a violent backlash from the military than to block ElBaradei’s appointment. Whatever the outcome, the next leader of Egypt will either solve the food shortage or find his government as short-lived as Morsi’s.

The biggest danger for us lies not in the choice of Morsi’s successor from the menu of Islamists but in the media-favored narrative that Morsi’s overthrow is a massive blow to Islamism.

The hard facts across the Middle East — in Libya, Syria, Egypt, Iran, and Iraq — indicate no setbacks for Islamism. In Turkey, Erdogan’s government still withstands any effort to return to the secular governments that had ruled since Ataturk.

As long as we have a president who believes that “inclusive” governments — those that include Islamists such as the Muslim Brotherhood — are to be supported, there is no possibility that Islamism in the Middle East can be rolled back. Islamism — and its kinetic element, terrorism — have to be defeated. The more “inclusiveness” Obama advocates in the Middle East, the farther we get from that goal.