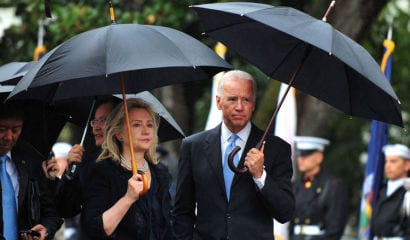 The next round of presidential primaries is mercifully far off, with the wall-to-wall campaign ads from the last one less than a year behind us. But it’s not too early to predict that barring a major change, the Democrats and Republicans will undergo a major role reversal — thanks to Hillary Clinton.

For decades now, Republicans have awarded their presidential nomination to either their most senior available leader or the runner-up from the last round of competitive primaries. Think Richard Nixon in 1960 and 1968, Gerald Ford in 1976, Ronald Reagan in 1980, George Bush in 1988, Bob Dole in 1996, John McCain in 2008, and Mitt Romney in 2012.

The exceptions almost prove the rule. Barry Goldwater won the nomination in the LBJ landslide year of 1964. George W. Bush virtually inherited it in 2000. In neither year did someone who could be considered a runner-up or make a convincing claim to be the party’s most senior leader seriously contest the nomination.

Some of those leaders were very senior indeed. Reagan was 69. The elder Bush was nominated for a second term at 68. Dole was 73, McCain 72. The last three men were each more than 20 years older than the Democrat who defeated them. McCain was almost a quarter-century older than Obama. Romney and the younger Bush were the spring chickens of the group.

Contrast this with the Democrats, who have tended to nominate fresh faces and in some cases virtual unknowns: George McGovern in 1972, Jimmy Carter in 1976, Michael Dukakis in 1988, Bill Clinton in 1992, and Barack Obama in 2008. As you can see, the Democrats’ mileage may vary with these candidates but the pattern is clear.

The main exceptions were Walter Mondale, the former vice president who had to beat back a strong challenge from relative newcomer Gary Hart in 1984, and Al Gore, the sitting vice president who easily turned aside fresher-faced Bill Bradley.

The 2004 Democratic primaries don’t fit neatly into either category. That year the Democrats turned down the two candidates who could make the strongest claim to being the most senior party leaders — 2000 vice presidential nominee Joe Lieberman and House Democratic Leader Richard Gephardt — but picked the more staid and senior John Kerry over upstarts like Howard Dean and John Edwards.

Yet even Edwards, before he was brought low by the National Enquirer, managed to weasel his way onto the 2004 ticket as a freshman senator. Four years later, the Democrats sent a senator just four years into his first term to the White House.

In 2016, the Democrats’ most likely nominee is Hillary. She has the backing of the major donors, the feminist groups, the party bosses who believe she was cheated last time. Her husband Bill Clinton, who has intermittently played both hero and villain in the Obama administration, will surely want another bite at the apple.

Few senior Republican leaders seem likely to make a run for president next time. It’s hard to imagine either Mitch McConnell or John Boehner wanting it. Paul Ryan might, but he isn’t going to seem that senior next to Hillary — he’s nearly 23 years younger. Rand Paul, Marco Rubio, Ted Cruz, Bobby Jindal, Scott Walker, and even Chris Christie will all be fresher, whatever their shortcomings.

Hillary will be 69 on Election Day and, like Reagan, will turn 70 during her first year in office. She looked tired at the end of her is tenure as secretary of state and indicated that she planned to sleep a lot once she left the job. There will be questions about her health.

While it was perfectly acceptable to raise the age issue against Reagan, Dole, and McCain, the media is likely to attribute such concerns about Hillary to sexism. But regular voters will harbor them anyway. Reinforcing her age is the fact that Hillary is the product of another era in politics. By the time 2016 rolls around, her husband’s race for a second term will be as far removed as the 1976 campaign was back then.

That 20-year difference helped Bill Clinton overcome the Carter legacy, but it didn’t do much good for Dole. The fact that he’d been Ford’s running mate two decades ago just reminded everyone he was old. Hillary was Bill’s running mate in a way too.

Democrats are going to have some problems with this. Their party has been based on a cult of youth since John F. Kennedy, and they have lionized the young voters who helped elect Obama. It won’t be easy to gin up enthusiasm for a septuagenarian.

Hillary is, not to be too polite about it, also a loser. She blew what was supposed to be a sure race in 2008. Many Democratic strategists will privately fear she’ll blow it again. Democrats haven’t re-nominated a general election loser since Adlai Stevenson in 1956, but they aren’t much kinder to primary losers either.

Most repeat Democratic primary candidates do worse the second time around, with Jesse Jackson’s 1988 campaign being a rare exception. Gore had to be elected vice president to overcome the stigma of losing that year. It’s not clear that Foggy Bottom can do the same thing for Hillary.

If they don’t offer Hillary absolution, however, the Democrats’ main alternative is probably Joe Biden: an even bigger loser from 1988 and 2008 who is also even older.

Unless Martin O’Malley or Andrew Cuomo somehow ends up running against Jeb Bush or Newt Gingrich, the fresh face in 2016 will belong to a Republican.